The South African government has halted its sanctioned confiscation of white farmers’ land after a global outcry.

Responding to international pressure, the South African government on Aug. 28 withdrew a controversial land appropriation bill from parliament that would have officially sanctioned the theft of land from white farmers, which would likely then be turned over to black cronies of the government.

Critics of the measure contend that this is probably not a real win since the same politicians are already drafting a replacement measure, but, with the Trump administration and the rest of the world watching, the pressure is on South Africa to do the ethical thing and not steal land from farmers.

In the July-August issue of historical revisionism magazine THE BARNES REVIEW (TBR), this writer, in an article titled “The White Holocaust in South Africa,” called attention to the worsening plight of Afrikaners (white South Africans, also called “Boer”), whose pleas for help were simply being ignored by our government.

American Free Press followed suit, using its last two issues to highlight developments in the story that the corporate media had been ignoring.

Following that, President Donald Trump tweeted, “I have asked Secretary of State @SecPompeo to closely study the South Africa land and farm seizures and expropriations and the large scale killing of farmers.”

The night before, radio talk show host Michael Savage, host of “The Savage Nation,” had taken the stories TBR and AFP have been faithfully reporting to his national radio audience.

“Some farmers are choosing to leave South Africa for Australia and even Russia in an exodus like the biblical one,” Savage said, before reading the petition, to wit:

We the People call upon President Donald J. Trump and his State Department to apply immigration priority to the South African farmers facing the violent confiscation of their lands by the African National Congress.

The white South African population currently faces ethnic cleansing and persecutions at the hands of the ANC government, the EFF, and various individual anti-white aggressors. White farmers have been brutally murdered, often including torture and rape and mutilation. Many white South Africans today live in poverty and squalor as a consequence of the ANC government’s Black Economic Empowerment policy which shuts whites out of the labor pool.

These common injustices have led to more violent rhetoric in recent years as leaders in South Africa, such as Julius Malema has stated that he is “not calling for the slaughter of white people—at least for now.”

This South African minority group faces extinction under this oppressive regime. It is the duty of the United States to properly vet and assist this population to safety.

Therefore, we hereby add our names to this petition calling on President Donald J. Trump and his State Department to grant priority to this persecuted group who pose virtually no threat to the American people and way of life.

Savage concluded, “While the mainstream media, even the conservative media, is transfixed with Mueller, Manafort, and collusion, they choose to ignore this shocking abuse of human rights because it doesn’t fit the media narrative.”

South African President Cyril Ramaphosa has just begun the process of seizing land from his own citizens, without compensation, purely due to their skin color. Literally the definition of racism. . . . That’s far more racist than anything Donald Trump has ever done, of course. Racism is what our elites say they dislike most, Donald Trump is a racist they say, but they paid no attention to this at all.

Tucker reported that Barack Obama recently spoke in South Africa where he “praised the racist government of South Africa,” telling his audience that Ramaphosa was one of his “favorite leaders” and calling the racist land grabs and murders aimed at white South Africans “inspiring.”

Curious if Obama’s rhetoric represented an official position, Tucker personally reached out to Secretary of State Mike Pompeo. He received the following reply from the State Department:

We are aware of these reports and have been following this issue very closely for some time. South Africa is a strong democracy with resilient institutions including a free press and an independent judiciary. South Africans are grappling with the difficult issue of land reform through an open process including public hearings, broad-based consultations, and active civil society engagement. President Ramaphosa has pledged that the land reform process will follow the rule of law and its implementation will not adversely affect economic growth, agricultural production, or food security.

Carlson rightly mocked the statement as “unbelievable,” saying, “The State Department did not mention that by following the rule of law, he has changed the country’s constitution to make it possible to steal land from people because they are the wrong skin color.”

He also called out Pompeo for ignoring “the seizures, which should be getting worldwide attention. . . . In other words, ‘Nothing to see here,’ says Mike Pompeo’s State Department.”

Tucker ended by suggesting the U.S. withhold the $350 million in foreign aid it gives South Africa annually until that country corrects its racist policies.

Trump was watching and in less than two hours had taken to Twitter ordering an adjustment to the State Department’s position.

Corporate media responded by denying everything and calling Savage, Carlson, and Trump “racists.” Associated Press even went so far as to solicit commentary from David Duke, enabling their outlets to twist their stories as Trump’s “white supremacy” agenda.

“The president will continue to follow through on this,” said Whiton, stating Trump has already developed a list of South Africa policy advisors and fast-tracked his search to fill the currently vacant ambassadorship to that country. He also ordered the State Department to retract its statement to Carlson and announced that the first lady will personally visit Africa later this fall.

Kallie Kriel, chief executive of AfriForum, the main advocacy group for Afrikaners, said the president’s tweet was a “huge step forward.” He had been largely ignored and refused appointments in his tour of the United States this year. Now, his phone is ringing. 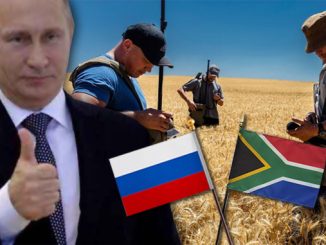