WASHINGTON D.C.—When the House of Representatives on Sept. 25 took up pivotal legislation about homeland security, it became clear that Americans might need to rethink the border wall concept. Why? According to Texas Republican Reps. Michael McCaul and Pete Sessions, among others, law enforcement authorities are finding tunnels—lots of tunnels—of varying length, depth, and sophistication crossing from Mexico into the U.S.

According to McCaul, earlier in September, a 600-foot-long tunnel was found connecting Mexican territory with an abandoned Arizona restaurant. He also recalled that in 2010, a tunnel that reportedly went under the Rio Grande River was found near El Paso, Texas.

About 200 cross-border tunnels have been discovered since 1990, and that’s just counting the ones the government knows about, said McCaul, who chairs the House Homeland Security Committee.

In the House chamber, where this writer was the only reporter in attendance for the nearly hour-long border session, Sessions remarked: “Drugs, crime, and gangs have been streaming in” through these invisible passageways, referring to the lengths that MS-13 Salvadoran gang members and drug cartelists will go to enter the U.S. Sessions added: “No part of the U.S. is safe if the southern border is not effectively taken care of.”

Across the aisle, strong support for this and related legislation came from Rep. Cedric Richmond (D-La.). He spoke eloquently on the House floor in support of Sessions and McCaul, exhibiting an unusually cooperative attitude given the sharp partisan differences that have been further aggravated by the controversy over conservative judge Brett Kavanaugh’s nomination to the Supreme Court.

Richmond, echoing his Republican colleagues, stressed that not only marijuana but also cocaine, heroin, people, and contraband are being found in these tunnels—some of which have functional water and sewer systems.

Richmond noted that adding fence and wall sections may incentivize transnational gangs and cartels to dig even more tunnels.

The Louisiana legislator has sponsored H.R.6620, a bill called the Protecting Critical Infrastructure Against Drones and Emerging Threats Act. Yes, you read that correctly. Congress is now confronting the specter of the drug cartels using unmanned aerial systems, or drones, to fly drugs and other contraband over the U.S. border—given the increasing availability, affordability, and sophistication of drone technology.

Under these legislative measures, federal, state, local, and tribal law enforcement agencies will be authorized to seriously address the tunnel problem, while the Department of Homeland Security will be tasked with conducting threat assessments regarding drones.

This is not to say that a wall has no purpose. CBS News reporter Sharyl Attkisson, for her popular “Full Measure” show, this past spring traveled to Laredo, Texas and—despite the mass media cartel’s typical criticism of pro-border wall stances—saw firsthand that Border Patrol agents need a physical barrier that provides a containment function to keep the flood of illegal aliens at bay. This enables the agents to focus on highly risky locations and apprehend enough border-crossers to not lose the battle altogether.

Another bill, H.R. 6742, the Secure Border Communications Act, like the above-named bills, was approved by the House and sent on to the Senate where it now sits in committee. It calls for ensuring that Customs and Border Enforcement agents have inter-operable, secure radios so they can better communicate without information being intercepted by cartels or gangs. 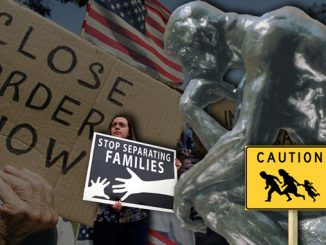 Invasion Arguments: The Good, the Bad, the Ugly

2 Comments on Discovery of Border Tunnels Has U.S. Rethinking ‘the Wall’