Virginia and Texas are re-evaluating their use of easily hacked machines and considering paper ballots, in large part thanks to tireless efforts of anti-vote fraud activists like Dr. Laura Presley.

Thankfully, the days of those way-too easily hackable electronic voting machines may soon be coming to an end. For over a decade, AFP has been reporting on how easy it is to hack the computerized voting systems that have spread across the country. Now, two states are moving to ban them, citing charges of vote-stealing, frequent malfunctions, and lack of a verifiable paper trail as the reasons for terminating their programs.

In Virginia, election officials do not need to be convinced that electronic voting machines are upsetting the democratic process.

On Sept. 8, with media coverage largely limited to local and regional outlets, “The Virginia Department of Elections called for the immediate decertification of [electronic] voting equipment in Virginia, and the State Board of Elections approved the request in an effort to increase the security and integrity of Virginia’s voting systems ahead of the November [2017] election,” state election official Andrea Gaines announced in a news release.

It turns out that Virginia officials decertified several electronic voting machine models because hackers at a gathering in Las Vegas demonstrated how they could compromise them.

“I understand why the Virginia State Board of Elections made their decision,” Falls Church Director of Elections David Bjerke responded, speaking to local media outlet WTOP.com. “The security that was involved in these, the direct-recording electronic machines, hadn’t been updated since 2004. Obviously, technology has increased since then, and the ability to hack equipment in general has increased.”

In a precinct with 10,000 registered voters, Bjerke went on to say, “I think the paper-based system is good because you do have a tangible ballot that can be used for audits, for recounts. You don’t have to trust the machine . . .. Until security on the Internet feels like something the people can trust . . . paper is the future.”

Texas is also rethinking its computerized voting systems. An important lawsuit is challenging the widespread use of these machines because they do not meet requirements set by the state constitution and election code.

An enduring problem in Texas is that, according to Dr. Laura Pressley, a former Austin City Council candidate who is suing the state’s election establishment, the electronic voting machines that have been used so far cannot produce an onscreen ballot that conforms to the definition of a ballot under state law.

She told AFP on Oct. 1 that, to her delight and surprise, state Attorney General Ken Paxton filed an amicus brief in support of her suit in the Texas Supreme Court. Although the high court has not yet agreed to hear her case, it intends to conduct what’s known as a full briefing in the next 30 to 60 days, in which it will determine whether or not to hear her case.

A key point raised in her lawsuit is that state election law and even the state constitution—in the largest state in the contiguous U.S., which sends 36 people to the U.S. House of Representatives— require that ballots must be numbered sequentially to qualify for use in Texas.

“But the [voting machines] here don’t number,” she said. “Over the last 16 years [since Texas began using electronic voting machines] these machines have not met the constitutional and legal requirement of numbering.”

Another point raised in her suit is the inability of the electronic voting machines to produce a verifiable paper audit trail, she said.

“It was gone for two months,” Ms. Pressley told AFP. “They found it in February. Eighteen-hundred real pieces of paper would be harder to lose.”

Election Security and the 2020 Race 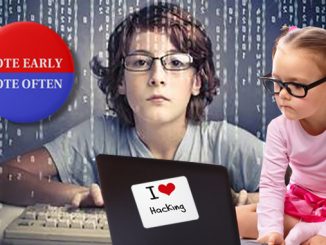 Way Too Easy to Alter