Rota, Spain—When precisely at 2 pm I applied my handbrake, I had put 700 km in my rear-view mirror. My colleague who was waiting for me pressed the flesh and suggested we freshen up at a local bar.

Unknowing that Rota is dubbed America’s Pearl Harbor in Spain, I expected a relaxing catch-up over a beer or café con leche in a typical Spanish bar. What I didn’t expect was our being greeted and befriended by scores of the bar’s customers. I had good reason to be bemused. With the exception of the bar’s owner, the 100 or so customers packed into the quaint Spanish bar were American servicemen and mostly in uniform.

Rota is situated near Cadiz, which is the gateway to the Mediterranean. Occupying 6,000 acres, it is home to thousands of mostly U.S. sailors and their kin. The naval base is protected by trenches you could lose a Greyhound bus in and is surrounded by multiple razor-wire-topped 5-meter-high steel fences and walls.

Bases aren’t cheap and domestic sacrifices are made to maintain a military presence abroad. Washington’s commitment in cost to policing the world exceeds the combined totals of the next 10 countries. President Joe Biden promises that his military will continue to conduct air raids against enemy targets “over the horizon.”

The following infographic was designed by Statista.com in 2017, showing the presence of U.S. troops around the world. “When every single country with some kind of U.S military presence is taken into account, nearly every country on the map has to be highlighted,” the report noted. When all U.S. military personnel from all branches are accounted for, there are a total of “200,000 active-service members deployed to 170 countries worldwide.” 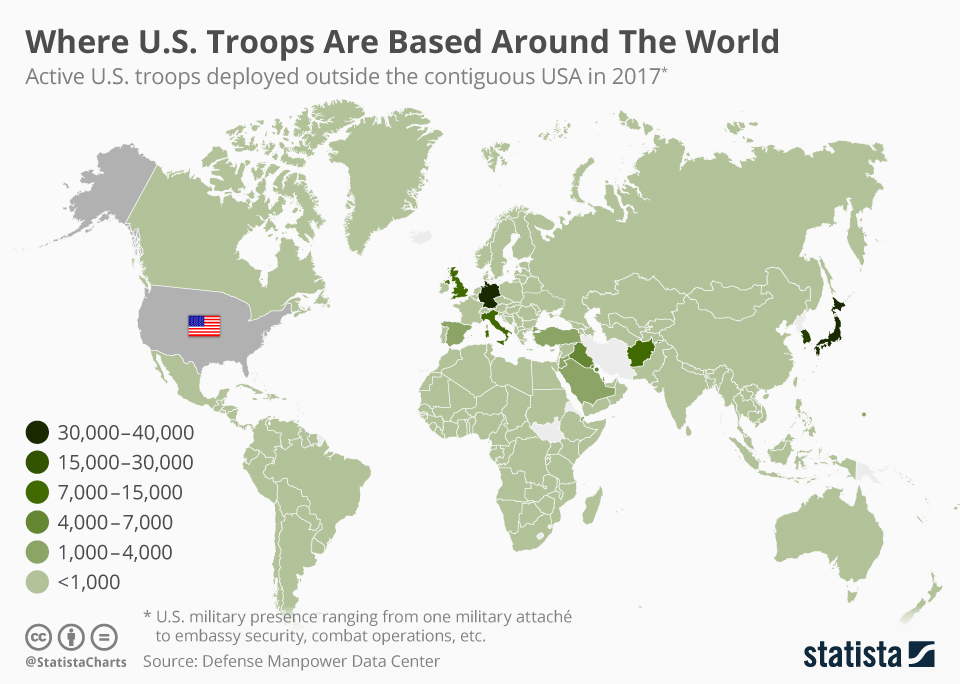 You will find more infographics at Statista.

Japan, Germany, and South Korea have the most U.S. troops of any country. Italy and the UK also have significant numbers of U.S. troops.

By contrast, the Russian Federation has 21 significant military bases situated outside Russia itself. But with the one exception of Syria, these former Soviet territory bases are much closer to home. However, with Russia’s superiority in hypersonic missiles and rapid advances in its nuclear submarine warfare, the need for bases abroad is not as important as it once was.

Many Americans are aware that the Arctic Circle is today a de facto Russian base. Moscow is surreptitiously pouring scientific resources behind the Arctic circle. Think of the Arctic as being an ice-covered Mexico and you get my drift. Speaking of Mexico, it might be recalled that Alaska was once a part of Imperial Russia.

Another warning shot across the bows: Moscow is today reaching out to multiple African nations with invitations to increase the staffing of their embassies on the “Dark” continent. Simultaneously, much of Central and Latin America, still regarded by some as Washington’s “zone of influence,” has this same month shown their unmitigated support for Russia’s preemptive strike on NATO-sponsored Ukraine.

Here in central Europe, the prodding by NATO emboldened the Kiev regime to prepare an invasion force on the Donbass frontiers of Donetsk and Luhansk, thus sparking the current conflict. It is a conflict that is rapidly draining the arsenals and the economy of both Europe and the United States. It is also a conflict that like Afghanistan and Iraq is already going badly wrong for Washington and the Pentagon.

Across the hundreds of American military bases, there are countless thousands of U.S. service personnel and their families. Every serviceman has a human story to tell. At that “American occupied bar” in Rota in Spain, U.S. serviceman Jayme and I enjoyed a special rapport. Curious about him, I fell into conversation. The poignancy of our chinwag over a beer forever stayed with me.

I learned that my young friend hailed from Chicago. Then, with a mixture of emotions, he told me that his childhood had been traumatic, to say the least. The young man’s parents regularly beat the hell out of each other and after they split, he and his brother became itinerant guests of family members.

“As a teen, I was uneducated, rootless and drifting,” he smiled. “Things didn’t get any better when my brother died in a car accident.”

Jayme went on to explain that being unemployed and likely unemployable, he was reduced to sleeping on park benches when by chance he was inspired to try his luck in an Army Recruiting Center. At this point, my friend became emotional as he explained how he was instantly welcomed and understood by the center’s personnel.

“For the first time in my life, I was wanted, I was believed in and supported,” he explained. “From that moment on I had a home and all one could wish for. At last, I could improve my health by using our free sports centers and gyms. I could look forward to an education and good healthcare.”

“I had a family, brothers, sisters, and a sense of belonging. I wanted for nothing. You see, Michael, the U.S. Army is the family I never had,” he stated wistfully.

“And where are you going from here?” I gently pressed him.

“But, Jayme,” I replied. “You are a naval rating. Afghanistan is landlocked and you can’t even get a canoe up the Hindu Kush.”

Michael Walsh is a Liverpool-born Irish author and award-winning journalist. The son of an Irish-American father who was an associate of Ernest Hemingway, he serves as AFP’s European Bureau Chief. He can be reached at [email protected]