Had Texas parishioners not been armed with guns, the shooter could have killed scores.

A key question in the aftermath of the shooting incident Dec. 29, 2019 at West Freeway Church of Christ in White Settlement, Texas near Fort Worth is whether this decisive use of firearms to prevent what would have been a much deadlier attack will break the long-established narrative in which every “mass shooting” leads to more calls for gun control.

The attack, which left two parishioners and the gunman dead, could have been much worse. It reportedly took just six seconds for Jack Wilson, a former reserve sheriff’s deputy, Army veteran, and deacon in charge of church security, to return fire when the West Freeway Church attacker, identified as 43-year-old Keith Thomas Kinnunen, opened fire with a shotgun.

Richard White, 67, another member of the church’s security team, evidently managed to get off a shot that hit a wall, but he was fatally shot by the gunman just before Wilson fatally shot Kinnunen with one pistol round to the head. One other parishioner, Anton “Tony” Wallace, 64, was also killed in the attack. The two victims died from their injuries after they were rushed to the hospital, according to the local CBS News affiliate.

The entire incident was captured on the church’s livestream video feed. An analysis of the video by “S2 Strategic Defense,” posted on YouTube, shows that the shooter had a brief word with an apparent usher standing against a nearby wall, presumably Wallace. The attacker first shot White as he struggled to remove his firearm from his coat and then shot the usher.

The hooded suspect—who clearly stood apart in appearance from the rest of the congregation given his long black coat and “skulking” mannerisms—can be seen on the far side of the camera field getting up from a pew, taking out the pistol-grip shotgun from his heavy coat and firing at the two victims before being shot himself. Wilson dropped the shooter from about 12 to 15 yards away, aiming from the back toward the front of the sanctuary (from left to right, from the camera’s vantage point). Due to the physical distance of the camera from the exchange, it’s hard to make out the faces of anyone.

“From the moment he came through the door, we had eyes on him, both physical eyes and cameras,” Wilson told CBS News, adding that the shooter entered, sat down, went to the bathroom for two minutes, and then returned to his seat and opened fire during communion. Kinnunen also wore a wig and fake beard, apparently because he would have been easily recognized due to his long criminal history, including aggravated assault with a deadly weapon.

Authorities are investigating the motive of the shooting, and there were no immediate details about how he acquired the pistol-grip shotgun.

“We lost two great men today, but it could have been a lot worse,” Senior Minister Britt Farmer told reporters. “I am thankful that our government has allowed us the opportunity to protect ourselves.”

“The threat was stopped thanks to the quick and heroic actions of those safety members inside the church,” White Settlement Police Chief J.P. Bevering added.

The mass media cartel too often breaks crucial journalistic rules by rushing to judgment on a wave of preconceived notions and policy agendas. While there were some welcome exceptions regarding mainstream media coverage of this case, in which the need for firearms for protection was fully displayed, some big-media outlets notorious for their shrill scribblings in favor of ever-tighter gun control nevertheless chafed and sputtered about the turn of events at the church, since it doesn’t fit the predesigned always-blame guns narrative.

USA Today suffered a Twitter storm of indignation when it tried to continue its gun-control crusade in the aftermath of the West Freeway Church attack. The newspaper ran a column by Elvia Díaz, initially published by The Arizona Republic, which did credit parishioners for promptly taking down the gunman but lamented that the incident had become yet another talking point for gun-rights advocates.

“Jack Wilson is a hero, all right. It took him only six seconds to kill a gunman at a Texas church, saving countless lives,” Ms. Diaz wrote. “Unfortunately, that kind of split-second heroism has been turned into a PR tool by gun advocates. . . . We know firearms are readily available to anyone who wants one, really. And that’s part of the problem. Sunday’s shooting isn’t just about Jack Wilson’s heroism. It’s about how Kinnunen got a hold of a weapon in the first place, given his criminal record.”

“The shooting shined a light on a new law passed by the Texas legislature in response to the [Nov. 5] 2017 attack on a church in Sutherland Springs that left 26 people dead, allowing anyone with a concealed carry license to carry firearms in places of worship,” The Washington Times, one of the nation’s few reasonably sane newspapers, countered. “Mr. Wilson, who owns a shooting range in Granbury, said he started training fellow members after the law passed to be a part of the church’s volunteer security team. Gun-rights advocates and conservatives, including President Trump, have pointed to the incident as an example of a good guy with a gun saving lives.”

Iraq and Afghanistan military veteran Larry Provost, in a column posted at “Townhall.com,” observed: “Actually, maybe the left won’t say anything, at least right now, because the shooting at the West Freeway Church of Christ shows half the reason why the Second Amendment actually works, i.e., personal protection and the other, more foundational . . . half being protection from tyranny.” 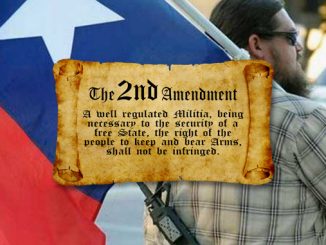