The radical far-left terrorist organization known as Antifa continues to plague the cities of Portland and Seattle, hot beds of Antifa activity that have been responsible for widespread violence and destruction in recent years.

On Feb. 12, about 50 black-clad Antifa-affiliated insurrectionists gathered in downtown Portland near the Central Police Precinct, according to Portland police. As officers began moving police vehicles to prevent them from becoming targets of the revolutionaries, Antifa members began pelting the officers with chunks of ice. Rather than engage the rowdy and violent crowd, police retreated, allowing the Antifa members to vandalize and destroy private property in the area.

“In an effort to avoid confrontation and de-escalate the situation, and due to lack of available resources, officers remained out of sight as much as possible,” the Portland Police Bureau explained in a mid-February press release. The Central Precinct, the only 24-hour police facility left in the city, was locked down for security purposes, while the riotous army outside engaged in criminality and violence with impunity.

“As officers from other precincts approached to access the intake for the Multnomah County Detention Center, the hostile group surrounded their cars,” the press release noted. “Traffic was very limited due to the treacherous weather, but the group stood in the street blocking the way.”

The group of out-of-control Antifa fanatics eventually went on a rampage in the surrounding business district, breaking the windows of a medical clinic and a Starbucks before dispersing around 11:30 p.m. Shamefully, Portland police made no arrests and are asking the public for help in identifying the criminals.

In addition to damaging private property and smashing windows in the area, Antifa also spray-painted Antifa symbols and messages on private property. One message read: “ACAB [All Police Are Bastards] includes Joe + Kamala,” indicating the radical terrorist group’s dissatisfaction with the Democratic Party, which they apparently believe should have already instituted a full-on communist regime.

In Seattle over the weekend, Antifa partisans barricaded the entrance of the Henry M. Jackson Federal Building with huge mounds of snow. As part of their Valentine’s Day protest, the group erected a sign outside the federal building with calls to “Abolish the Blue,” defund the Immigration and Customs Enforcement agency, and to welcome refugees and illegal aliens, a key tenet of far-left ideology in the push for a borderless world and destruction of sovereign nation states.

Antifa fanatics also barricaded the entrance of a police station in Seattle, similarly using a mountain of snow and blocks of ice to obstruct the vehicle entrance and prevent officers from responding to emergency calls.

While the political and media establishment continue to hype the purported threat of “rightwing domestic terrorism,” Antifa and other radical leftist groups continue their reign of terror without consequence. Local and federal law enforcement agencies across the country have

largely backed down in the face of violent leftwing protests, particularly over the course of 2020, while mostly harmless conservative groups are highly scrutinized, demonized, investigated, and prosecuted by the FBI and other law enforcement agencies. 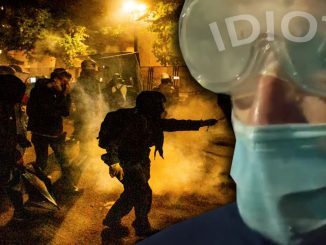