The family of politically incorrect talk show host Tucker Carlson has been threatened by unhinged leftists.

Tucker Carlson, the popular and outspoken Fox News host who continues to dominate the cable news ratings, was recently targeted by antifa protesters at his home in the Washington, D.C. area. Police are investigating the protest, which took place while Carlson was at the Fox News studio preparing for his live nightly news program, as a potential hate crime.

On Nov. 7, several members of Smash Racism DC, a radical left-wing antifa-affiliated group, posted Carlson’s home address online before several of its members showed up there to protest. The group of roughly 20 individuals chanted anti-racist slogans outside Carlson’s home and called him a “racist scumbag” that needs to flee the city. Carlson’s wife was home alone at the time, and she quickly called police after hearing loud banging on her front door and people outside with bullhorns screaming.

“I called my wife,” Carlson told The Washington Post after learning about the protest at his home via text message. “She had been in the kitchen alone getting ready to go to dinner and she heard pounding on the front door and screaming. Someone started throwing himself against the front door and actually cracked the front door.”

The participants in the protest posted a video of their actions on social media, but it was quickly removed following backlash. In the now-deleted video, protesters can be heard shouting: “Tucker Carlson, we are outside your home!” Clearly, the group was attempting to intimidate Carlson and his family, a common tactic of radical left-wing antifa groups.

The protesters ludicrously insisted Carlson promotes hate on his nightly news program and preaches “an ideology that has led to thousands of people dying,” according to the video. In an obvious attempt at intimidation, one protester can be heard shouting, “We want you to know, we know where you sleep at night!” The group then began chanting, “Tucker Carlson, we will fight! We know where you sleep at night!”

D.C. police quickly responded to the incident, but as AFP goes to press, no arrests have been made despite the horde vandalizing Carlson’s home with an anarchy symbol. In the wake of several high-profile arrests of right-wing activists who participated in various political rallies over the past two years, many are wondering when political criminals and terrorists on the left—such as those involved in the attempt to terrorize at Carlson’s family—will be prosecuted for their criminal actions.

Alaina Gertz, a spokesperson for the D.C. Metropolitan Police, told the press that an investigation is currently open into the incident.

“We welcome those who come here to exercise their First Amendment rights in a safe and peaceful manner; however, we prohibit them from breaking the law,” Gertz stated the day after the protest. “Last night, a group of protesters broke the law by defacing private property at a Northwest D.C. residence. MPD takes these violations seriously, and we will work to hold those accountable for their unlawful actions.”

In Washington, D.C., a criminal targeting someone for their political views can be prosecuted for committing a hate crime.

In related news, it has also been revealed that Carlson’s daughter was verbally accosted by an irate man while having dinner with her father and brother at a country club in Charlottesville, Va. last month. Juan Granados, a former member of the country club who has since had his membership revoked for his disgraceful actions, stopped Carlson’s daughter while she was walking back to the dinner table after using the restroom.

Granados asked the young lady if she was sitting with Tucker Carlson, to which she responded, “That’s my dad.” Granados then verbally assaulted the young lady, using vulgar language and insulting her.

Carlson and his son then confronted Granados, who became “profane” once again, according to a statement released by Carlson. In response, Carlson’s son threw a glass of red wine in Granados’s face and demanded he leave the club, which he eventually did.

“Immediately after the incident, I described these events to the management of the Farmington Country Club,” Carlson noted following recent press coverage of this incident. “The club spent more than three weeks investigating the incident. Last week, they revoked the man’s membership and threw him out of the club.”

Holding politically incorrect opinions and being a champion of honest, straightforward journalism is no small task in modern America. As Carlson’s experience shows, the radical left will stop at nothing to intimidate and silence their political opponents, often times using some of the most dishonorable, disgraceful tactics available at their disposal. 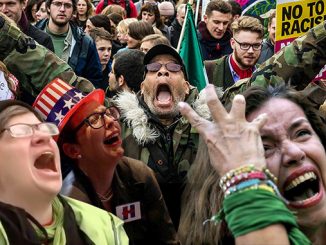