In early October, the Department of Homeland Security (DHS) officially released its Homeland Threat Assessment report, detailing the federal agency’s conclusions regarding threats to the American people and homeland. The report is designed to identify “the primary threats facing the United States at and inside our borders,” and was compiled by drawing “upon all sources of information and expertise available to the Department, including from intelligence, law enforcement, and our operational components,” the report notes.

The report addresses a variety of subjects relating to the department’s mission of protecting the American people and her borders. In seven separate chapters, the report analyzes cybersecurity threats to the U.S., foreign influence (political and economic), threats to U.S. economic security, foreign and domestic terror threats, transnational criminal organizations, illegal immigration, and natural disasters.

Perhaps most importantly, the latest DHS report specifically alleges that so-called “white supremacist extremists” will “remain the most persistent and lethal threat in the Homeland,” a dubious conclusion the agency has come to in previous threat assessment reports. Chad Wolf, the acting secretary of the DHS, explained in the foreword to the report that he and his agency were “particularly concerned about white supremacist violent extremists who have been exceptionally lethal in their abhorrent, targeted attacks in recent years,” without citing any particular examples of such attacks.

The idea that “white supremacist extremists” pose the worst threat to the United States is a talking point directly from anti-white hate groups such as the Anti-Defamation League (ADL) and Southern Poverty Law Center (SPLC), organizations that clearly have the ear of the acting secretary and other influential leaders in the department specifically and federal government more generally. The ADL and SPLC have spread the notion that “white supremacist extremists” are the greatest threat facing the American people for several years now and are regularly featured as unbiased experts in the mainstream mass media and academia. Citing dubious statistics and entirely biased reports they themselves author and publish, the ADL and SPLC have been extremely effective in spreading their poisonous, anti-American talking points.

Incredibly, while the DHS once again baselessly asserts that “white supremacist extremists” pose the greatest threat to the American homeland, radical Antifa cells and Black Lives Matter (BLM) protesters have engaged in outrageous violence and criminality, burning, looting and destroying countless businesses and private property across the country for the past several months, largely without any legal consequences. The latest DHS report, like previous reports, does not even specifically mention Antifa or BLM as potential threats to the homeland, instead referring more vaguely to “antigovernment, anti-authority, and anarchist violent extremism.”

Acting Secretary Wolf even notes in his foreword that as the latest Homeland Threat Assessment report is publicly released, “we have seen over 100 days of violence and destruction in our cities” by anti-government, anti-authority and anarchist violent extremists. He also states that “DHS law enforcement officers suffered over 300 separate injuries and were assaulted with sledgehammers, commercial grade fireworks, rocks, metal pipes, improvised explosive devices, and more.”

“This violence,” Wolf continues, “perpetrated by anarchist extremists and detailed in numerous public statements that remain available on the DHS website, significantly threatens the homeland by undermining officer and public safety—as well as our values and way of life.”

Amazingly, even after admitting that his own officers are being attacked and assaulted by violent anarchists and far-left extremists across the country, Acting Secretary Wolf and his department continue to publicly insist that “white supremacist extremists” pose the greatest public threat to America, and that the DHS “is still in the nascent stages of understanding the threat” that violent anarchist extremists pose “to Americans, the homeland, and the American way of life.”

Radical, violent left-wing extremists and terrorists are not only attacking and assaulting law enforcement officers across the country, they have defaced and destroyed countless public monuments, statues, and memorials as well as private property in recent months. They have regularly engaged in violence against their perceived political opponents, which includes at least two instances of murder. They have also shut down major thoroughfares, burned businesses, intimidated innocent citizens, assaulted countless people, invaded neighborhoods, and made death threats against those who dare to resist their “peaceful protests.”

Michael Reinoehl, a fanatical left-wing terrorist who described himself as “100% Antifa” in social media posts, shot and murdered Aaron Danielson, a Trump supporter, in Portland in late August following clashes between a pro-Trump caravan and Antifa and BLM counter-protesters. When federal officers attempted to arrest Reinoehl in early September, he pulled a firearm and was shot and killed by officers. Reinoehl was a regular protester in Portland and participated in Antifa- and BLM-led protests and other provocations for months. In early July, Reinoehl was cited by Portland police for publicly possessing a loaded firearm, resisting arrest, and obstructing police but was later released, as the vast majority of radical, left-wing terrorists are by left-wing local prosecutors, many times inevitably funded by the likes of billionaire troublemaker George Soros.

In Denver last weekend, yet another Trump supporter was shot and killed by a left-wing, BLM-supporting man named Matthew Dollof, who was purportedly hired by a local Denver media outlet to provide security for their staff members during a protest that day. During the protest, Dollof became engaged in a confrontation with several Trump supporters, and eventually shot and killed a man named Lee Keltner. Denver police are still investigating the deadly encounter, and Dollof is being held in connection to the first-degree murder investigation.

President Trump and his administration have been critical of the radical left, with the president regularly blasting and condemning Antifa both on Twitter and in public speeches. During the first presidential debate, President Trump declared that “somebody’s got to do something about Antifa and the left” because political violence is largely a leftwing problem.

“Almost everything I see [political violence] is from the left wing, not from the right wing,” the president stated during the debate, causing much controversy despite the obvious accuracy of the statement. The president refused to “cancel” groups simply because their members are right-wingers—many of whom have black and Hispanic members. This is something the left-wing news media refuses to report. For instance, one of the founders of the Proud Boys, whom Trump was asked to condemn, is Afro-Hispanic, hardly your typical “white supremacist.”

Regrettably, the public condemnations and insinuations to prosecute the radical left have largely failed to materialize under President Trump’s administration. And, as previously noted, local prosecutors regularly drop charges against radical leftwing criminals. In Portland, for example, a recent report noted that 70% of individuals charged during the months-long riots and protests that have devastated that city have had charges dropped. The local prosecutor in St. Louis and prosecutors in other major American cities have faced similar criticisms for failing to prosecute rioters, looters, and other radical left-wing criminals.

For all the tough talk about the radical left from the Trump administration, little action has been taken to bring to justice these criminals that have wreaked havoc and mayhem across the nation for months on end. Alternatively, the DHS and countless mainstream media talking heads continue to hype the purported threat of “white supremacist extremists,” while portions of the country went up in flames at the hands of Antifa, Black Lives Matter, and the radical left.

Open your eyes, Chad Wolf. White supremacists are few and far between and pose not nearly the threat that those Marxist/Anarchist partners in crime—Black Lives Matter and Antifa—pose to the American citizenry. 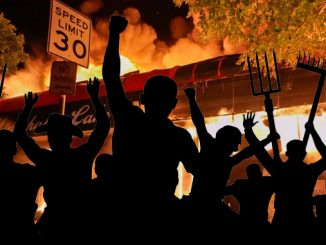