Psychiatric drugs are more dangerous than you have ever imagined. If you haven’t been prescribed one yet, you are among the lucky few. If you or a loved one are taking psychiatric drugs, there is hope, but you need to understand the dangers and how to minimize the risk.

Antipsychotic drugs, including both older and newer ones, have been shown in many human brain scan studies and in animal autopsy studies to cause shrinkage (atrophy) of the brain. The newer “atypicals” especially cause a well-documented metabolic syndrome including elevated blood sugar, diabetes, increased cholesterol, obesity and hypertension. They also produce dangerous cardiac arrhythmias and unexplained sudden death, and they significantly reduce longevity. In addition, they cause all the problems of the older drugs, such as Thorazine andHaldol, including tardive dyskinesia, a largely permanent and sometimes disabling, painfulmovement disorder caused by brain damage and biochemical disruptions.

Despite their enormous risks, the newer antipsychotic drugs are now frequently used offlabel to treat conditions from anxiety and depression to insomnia and behavior problems in children. Two older antipsychotic drugs, Reglan and Compazine, are used for gastrointestinal problems, and despite low or short-term dosing, they too can cause problems, including tardive dyskinesia. 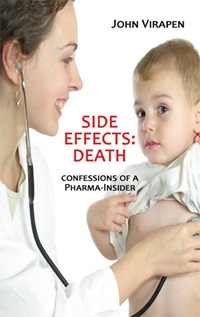 Side Effects: Death is the true story of corruption, bribery and fraud written by Dr. John Virapen, who has been called THE Big Pharma Insider. During his 35 years in the pharmaceutical industry internationally (most notably as general manager of Eli Lilly and Company in Sweden), Virapen was responsible for the marketing of several drugs, all of them with side effects.

Now, Virapen is coming clean and telling all of the little secrets you were never intended to know!

Nowadays, many patients are given medications for insomniawithout being told that they are in fact receiving very dangerous antipsychotic drugs. This can happen with any antipsychotic butmost frequently occurs with Seroquel, Abilify and Zyprexa. The patient is unwittingly exposed to all the hazards of antipsychotic drugs.

Mostly because of severely worsened anxiety and insomnia,many cannot stop taking them and become permanently dependent. This frequently happens after only six weeks of exposure. Any benzo can be prescribed as a sleep aid, but Dalmane, Doral, Halcion, ProSom and Restoril are marketed for that purpose.

“Non-benzo” sleep aids, such as Ambien, Intermezzo, Lunesta and Sonata, pose similar problems to the benzos, including memory and other mental problems, dependence and painful withdrawal. They can cause many abnormal mental states and behaviors, including dangerous sleepwalking.

Insufficient data is available concerning whether they lead to brain shrinkage and dementia, but these are likely outcomes considering their similarity to benzos. Recent studies show that these drugs increase death rate, taking away years of life, even when used intermittently for sleep.

It is time to face the enormous tragedy of exposing children and adults to any psychiatric drug for lengthy periods.

Meanwhile, there is no substantial or convincing evidence that any psychiatric drug is useful longer-term. Psychiatric drug treatment for months or years lacks scientific basis. Therefore, the risk-benefit ratio is enormously lopsided toward the risk.

The safest solution is to avoid starting psychiatric drugs. It is time for a return to psychological, social and educational approaches to emotional suffering and impairment. 

Peter R. Breggin, M.D., a psychiatrist in private practice in Ithaca, New York, has been called “The Conscience of Psychiatry” for his many decades of successful efforts to reform the mental health field. His scientific and educational work has provided the foundation for modern criticism of psychiatric drugs and ECT, and leads the way in promoting more caring and effective therapies. He has authored dozens of scientific articles and more than 20 books.