The Pentagon has finally completed its first-ever audit, and the results are as many of us expected. After spending nearly a billion dollars to find out what has happened to trillions in unaccounted-for spending, the long look through the books has concluded that only 10% of all Pentagon agencies pass muster. I am surprised any of them did.

Even the Pentagon is not surprised by the failure of the audit. “We failed the audit, but we never expected to pass it,” said Deputy Secretary of Defense Patrick Shanahan. Can we imagine any large U.S. company subject to the prying eyes of the IRS being so unfazed by the discovery that its books have been so mishandled?

As with all government programs, but especially when it comes to military spending, the failure of a program never leads to calls for funding reductions. The Pentagon’s failure to properly account for the trillions of taxpayer dollars shoveled in year after year only means, they say, that we need to send more money. Already they are claiming that with more resources—meaning money—they can fix some of the problems identified by the audit.

Outgoing chairman of the House Armed Services Committee, Rep. Mac Thornberry (R-Texas), warned against concluding that this mishandling trillions of dollars should make us hesitant to continue sending trillions more to the Pentagon.

The failed audit “should not be used as an excuse for arbitrary cuts that reverse the progress we have begun on rebuilding our strength and readiness,” he said.

The neocons concur. Writing in the news and commentary website “Free Beacon,” editor Matthew Continetti, who happens to be Bill Kristol’s son-in-law, warns that now is “the wrong time to cut defense.”

But I agree with the young neoconservative Continetti. I would never support cutting a penny of defense, but the Pentagon’s lost trillions have nothing to do with defense. That is money propping up the high lifestyles of those connected to the military-industrial complex.

Continetti and the neocons love to throw out bogeymen like China and Russia as excuses for more military spending, but in fact they are hardly objective observers. Look at how much the military contractors spend funding the neocon publications and neocon think tanks telling us that we need more military spending. All this money is stolen from the productive economy and diverted to enrich neocon cheerleaders at our expense.

Of course, the real problem with the Pentagon and military spending in general is not waste, fraud, and abuse. It is not $10,000 toilet seats or coffee mugs. The problem with military spending is the philosophy that drives it. If the U.S. strategy is to maintain a global military empire, there will never be enough spending because there is never enough to control every corner of the globe. But if we are to return to a well-defended republic, military spending could easily be reduced by 75% while keeping us completely safe. The choice is ours. 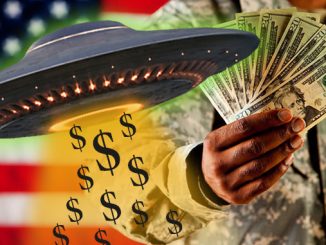 Is ‘Official’ Talk of UFOs a Ruse for Massive Military Spending?