Author, attorney, and Nixon administration insider Geoff Shepard joins S.T. Patrick to reassess the figures and events of the Watergate era. Shepard, the author of The Real Watergate Scandal: Collusion, Conspiracy, and the Plot That Brought Nixon Down, is an expert on the legal malfeasance of the public figures involved, but he also knew many of the administration officials that were so demonized by the media and historical establishment.

What were John Ehrlichman, H.R. Haldeman, John Mitchell, and Charles Colson really like? How did a young Geoff Shepard land his first job in the White House? What was the reaction of Ehrlichman’s Domestic Council to the failed break-ins? How and when did the Watergate story gain traction nationally? Shepard also takes us into the careers of Judge John Sirica and special prosecutors Archibald Cox and Leon Jaworski. … All of this and more in our first discussion with author Geoff Shepard.

Geoff Shepard can be followed at his website, GeoffShepard.com. 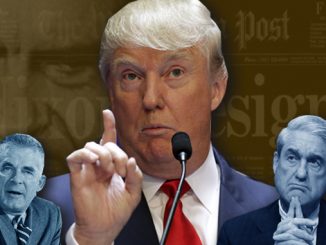 1 Comment on Audio: Geoff Shepard on ‘The Real Watergate Scandal’