Morris Dees, the disreputable hate-peddler who has for many years posed as the arch-enemy of hate, was fired from his position as head of the infamous Southern Poverty Law Center (SPLC) in Montgomery, Ala. The SPLC is reviled among thinking Americans as an anti-free speech, anti-Christian, anti-conservative pressure group that has accused everyone from President Donald Trump to this newspaper—and many publications, organizations, and individuals in between—of being aligned with dangerous extremism.

The firing of Dees, now 82—who co-founded the SPLC in 1971—was effective March 13. SPLC President Richard Cohen was tight-lipped about the specifics, but he did say it had to do with “misconduct” of an unspecified nature.

“As a civil rights organization, the SPLC is committed to ensuring that the conduct of our staff reflects the mission of the organization and the values we hope to instill in the world,” Cohen said in a statement.

In the Montgomery Advertiser, Dees was quoted as saying: “I refuse to say anything negative about the center or its employees. I’ll let my life’s work and reputation speak for itself.”

His life’s work speaks for itself, indeed. In 1994, Dees was accused of mistreating the organization’s minority employees who said they “felt threatened and banded together,” as local media reported at the time, even while the SPLC has preached nonstop that the slightest alleged misstep against minorities is on par with a KKK lynching.

Worst of all, Dees molded the SPLC into a rogue agency, which, armed with its “Hatewatch” list and map of alleged “hate groups,” has routinely blacklisted scores of individuals and organizations while acting as a dominant source of information for media, law enforcement, and many large corporations.

That appears to be the SPLC’s core function: Erode and destroy the constitutional rights and reputations of most conservatives and constitutionalists, and criminalize “right-wing” free speech and assembly, all behind the smokescreen of being a civil rights litigation and education center. Although this is the very antithesis of fairness and objectivity, most media have continued to trust the SPLC’s analyses.

At least one newsman sees the truth. Jim Tharpe—the Advertiser’s managing editor in 1994 when the story broke on the SPLC mistreating minority staffers—said of Dees’s firing: “I would hope the IRS and the Justice Department would take this as [an] opportunity to come in and take a close look at the [center’s] finances … . It’s long overdue.”

In response to the SPLC’s announcement that it had settled a defamation lawsuit brought by Quilliam International—a group that works to fight anti-Muslim bigotry and Islamist extremism—for nearly $3.4 million, Family Research Council President Tony Perkins responded by saying that the SPLC’s “falsehoods and dangerous tactics have finally caught up with them… . Even after this massive pay-out, the SPLC continues to sit on hundreds of millions of dollars (much of it offshore) that they use to advance their liberal policy agenda… . This public acknowledgment of their defamatory actions leaves the media and big business with no excuse in continuing to use the SPLC as an objective, independent source.”

Mark Anderson is AFP’s roving editor for AFP. Email him at [email protected]. 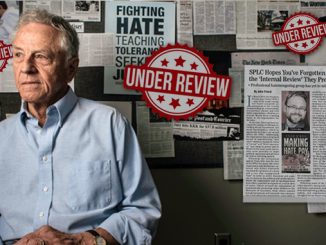 SPLC Hopes You’ve Forgotten About the ‘Internal Review’ They Promised