Yet another government agency is mired in “misconduct,” and this time the deaths of 17 students and teachers is drawing more attention to the criminal behavior. Could potential lawsuits filed by an angry, grieving school community be the tipping point to clean up an apparently dirty sheriff’s department?

In the wake of this latest schoolyard massacre, the media has revealed the sheriff’s department had been contacted between 23 and 39 times over the course of about 10 years by Cruz’s family and others concerned about his violent outbursts and actions, mental health struggles, and wellbeing. The Florida Department of Children and Families (DCF) had conducted what it calls an investigation at one point, but it closed the case without referring the boy for case management services. The nonprofit mental health agency tasked with assessing Cruz on two occasions, Henderson Behavioral Health, failed to recommend holding him for assessment under the Baker Act, Florida’s law that allows temporary detention in a mental health facility for the purposes of psychological evaluation, despite school counselors’ concerns.

Cruz had been diagnosed with autism and multiple mental health disorders. As a longtime student in the Broward County Public Schools system, he surely should have been receiving extensive exceptional student services up until Douglas High School finally expelled him earlier this year for fighting.

The Broward District Schools Police, which says on its website it provides the district’s “law enforcement services through collaborative partnerships with the county’s municipal police departments and the Sheriff’s office,” certainly knew of Cruz’s previous violent incidents and should have been monitoring him. Yet the school resource officer at Douglas high and as many as three other deputies remained outside the building as shots rang out rather than rushing in to stop the carnage. Fortunately, the killing spree came to an end without their help when Cruz’s gun jammed, according to witnesses.

On top of all these local “safety valves,” the FBI had received at least one specific warning about Cruz that he commented he would become a “professional school shooter.” Apparently, no one at the bureau thought to notify the South Florida branch.

Among these myriad warnings provided to law enforcement and other officials tasked with keeping Floridians safe, some people, including Cruz’s family members, even went so far as to express concern specifically that he was “a school shooter in the making.”

Yet in spite of all of these warnings, Cruz was not prevented from legally purchasing a firearm in spite of background checks having been conducted, according to the media. He is reported to have owned multiple weapons, none of which were ever confiscated in spite of his apparent proclivity toward violence and obvious mental health issues. And he was never arrested or Baker Acted (held involuntarily for psychological evaluation) even once, if reporting is accurate.

This level of incompetence at every level is stunning, and Gov. Rick Scott (R) has ordered an investigation into the massive failures within Sheriff Israel’s department. Many residents are demanding that investigation be broadened to include the other agencies that failed to prevent the murders.

However, an article published at “FreedomOutpost.com” based on research conducted by the blogger Sundance reveals this utter lack of action to prevent Cruz from using a Smith & Wesson M&P 15 to slaughter students and teachers cannot be blamed on incompetence. Instead, asserts the author, it is because “at every level, the government failed us by not enforcing our laws or even abiding by simple, logical standards of behavior,” and involves the Broward County School District and local law enforcement agencies.

The core of the problem, explains the article, stems from an effort between the agencies to end the longstanding disproportionate levels of exclusionary discipline being meted out to black students—laudable on its face—that turned into a willful, coordinated failure to arrest youth for crimes from minor misdemeanors to even felonies.

A report at “The Last Refuge” blog on “Conservative Treehouse” explains: “Over time, even the most severe of unlawful conduct was being filtered by responding police. We found out about it when six cops blew the whistle on severe criminal conduct they were being instructed to hide. The sheriff and police chiefs were telling street cops and school cops to ignore ever-worsening criminal conduct.” Results of an internal investigation were buried, the article notes.

Now, RT reports corruption at BSO runs even deeper, and the department is currently “facing a total of 66 misconduct investigations” into a series of “accusations that Israel’s deputies and other employees are responsible for drug-trafficking, armed kidnapping, falsifying records, battery, assault and more,” over the last six years. A lawsuit against the department for the shooting death of an unarmed man in 2013 notes, “Approximately 66 BSO deputies and other employees, including supervisory personnel were arrested for, charged with, and/or convicted of crimes that run the gamut from armed kidnapping, to battery, assault, falsifying records, official misconduct, narcotics trafficking, and other crimes involving dishonesty and violence in the years immediately proceeding [sic] 2013 when Jermaine was killed. Most of the offenses on the list occurred in the years 2012-2013,” writes RT.

The “FreedomOutpost” article suggests: “Instead of worrying about guns, the media should be asking how could local police pay 39 different visits (Broward police claim it was ‘only’ 23 visits) to one student without that student ever spending time in prison or a psychiatric ward. They should be asking why the local police wouldn’t share information about this high school kid with social services or other law enforcement agencies.” The media should also be questioning why that young man did not have a criminal or mental illness-related record, which would have barred him from legally purchasing firearms.

Regardless of apparent wrongdoing in his department for many years, Sheriff Israel had the audacity to say, “I’ve given amazing leadership to this agency,” during a segment on CNN. He has repeatedly rejected statewide, bipartisan calls for him to resign. “Of course, I will not resign.”

The cowardly school resource officer (SRO) who failed to do anything to protect the students he’d worked with for 25 years when called upon to do so has resigned in shame after being suspended by the sheriff. Asked what he thought of the SRO’s inaction, Sheriff Israel stated, “Devastated. Sick to my stomach. There are no words.” Many Floridians, including the grieving and outraged parents, families, and friends of the most recent victims, might offer the same response if asked how they feel about the years of corruption under Sheriff Israel’s command.

The investigation ordered by Gov. Scott must dig much deeper than simply into the failures to prevent or respond properly to the rampage at Douglas High School. It needs to uncover the dirt that must be cleaned up and should clean out the BSO personnel who have allegedly unjustly imprisoned and otherwise destroyed the lives of many while profiting from their deep corruption. Prison cells will be freed up and ready for these unethical “public servants” when that happens.

Originally from the Midwest, Sophia Meyer is a freelance writer, editor, and avid gardener now living on Florida’s Treasure Coast. 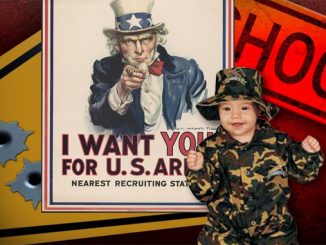 1 Comment on Law Enforcement Failures, Corruption to Blame for School Shooting, Not Guns