Remember the slew of bomb threats a couple years back against Jewish Community Centers and other targets, including transportation hubs, in multiple countries? Yes, the threats the ADL insisted were evidence of the increasing problem of “anti-Semitism” and scream it was Donald Trump’s fault? Turns out, the perpetrator, found guilty in an Israeli court, is actually an Israeli-American teenager, who even tried to sell his “school bomb threat” services online. He was found guilty of extortion, sending fraudulent messages, money laundering, computer hacking, and assault.

An Israeli court found a dual Israeli-American teenager guilty late last month of making roughly 2,000 bomb threats, most of which targeted Jewish institutions, including Jewish Community Centers across the country, as well as the Israeli embassy and the Anti-Defamation League.

He also targeted a number of airports and airliners, malls, police stations, and other institutions in the United States, Canada, the UK, New Zealand, Denmark, Norway, and Australia with fake bomb and public shooting threats between 2016 and 2017.

Michael Ron David Kadar, the 19-year-old Israeli-American man, who has been previously identified as the suspect in the hoax bomb and shooting threats, was found guilty of a slew of crimes including extortion, sending fraudulent messages, money laundering, and computer hacking. Additionally, he was found guilty of assault for attempting to grab the gun of a policewoman who was searching his home.

The bizarre case drew international headlines shortly after President Donald Trump’s election, causing alarm in the Jewish community about rising levels of purported and threatened anti-Semitic violence. At the time, the mainstream media and other leftists blamed Trump for encouraging and mainstreaming racism, anti-Semitism, and bigotry more generally, citing the anti-Semitic bomb threats phoned into Jewish Community Centers and other Jewish institutions around the United States.

According to authorities, Kadar made thousands of threatening phone calls between January and March 2017 using an online calling service that allowed him to mask his identity and disguise his voice. In addition to targeting Jewish institutions, airports, malls, and police stations around the world, he also attempted to extort Ernesto Lopez, a Republican state senator from Delaware.

Kadar offered his extortion services through a shady online black-market place called AlphaBay, where he advertised a “School Email Bomb Threat Service,” offering clients a custom-designed threat that he would send to schools for a fee of $30.

Kadar’s hoax bomb and public shooting threats caused hysteria not only in the organized Jewish community, but at countless institutions he targeted, causing evacuations, panic, and fear.

Psychiatrists said after analyzing Kadar that he suffers from autism and paranoid delusions, but that he is fit to stand trial. His family and defense attorney maintain he suffers from a brain tumor and doesn’t understand the severity of his actions.

That claim was soundly rejected by Israeli Judge Zvi Gurfinkel, who oversaw his recent trial.

“The defendant has changed his version of events multiple times according to what suits him the most,” Gurfinkel stated during the trial. “He very much understands the significance of his actions.”

Gurfinkel maintained that the record demonstrated that Kadar was fully aware of the significance of his actions, that he took steps to conceal his identity and actions, and that he advertised his services online. Furthermore, he noted that Kadar stated previously that he actually enjoyed seeing the chaos and panic that resulted after the hoax threats were called in.

“The defendant sowed terror and panic in a systematic and sophisticated way, all while concealing his identity, and disrupted the lives of many people whom he has threatened,” Gurfinkel stated.

Kadar potentially faces several years behind bars for the convictions in Israeli court. As AFP goes to press, a sentencing hearing has yet to be set following Gurfinkel’s guilty verdict.

In March, several U.S. states and jurisdictions charged Kadar with a range of crimes as well, including the states of Florida and Georgia and Washington, D.C. It is uncertain if Kadar will be extradited to the U.S. to face trial.

Kadar’s bomb threats targeting Jewish centers prompted a number of multinational tech companies to kick nationalists off the Internet and resulted in the banning of several book publishers from retail platforms like Amazon.

Since it is now known that a young Israeli-American was responsible for the mayhem, one would expect an apology was due by tech giants and the mainstream media to all of the groups that were falsely blamed for the calls. As AFP goes to press, however, all of those innocent groups and individuals targeted by the hysteria are still waiting for CNN, Google, Amazon, and PayPal to reach out to them. 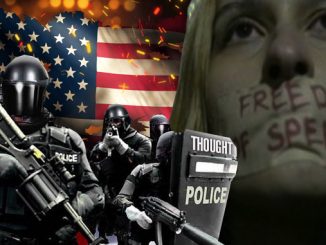 We Have the Freedom to Starve