“Anti-Semitic” and “racist” epithets are trotted out any time “establishment truth” is challenged or Israeli policies are criticized, in an effort to create in the reader a knee-jerk emotional aversion to a writer or publication. But it’s valuable to pause and ask, first, what does “anti-Semitic” even mean? Furthermore, does challenging the politics or culture of a particular group—such as a nation’s government—necessarily equate with “racism”?

Wells Fargo is one of America’s sleaziest and most disreputable big banks. Their deceptive credit-card pitches contain small-print clauses allowing them to suddenly jack up their “introductory rates” and hit you with usurious 30%-plus interest. So it shouldn’t really surprise anyone that Wells Fargo canceled AFP’s credit-card processing account because some billionaire banker somewhere doesn’t like some of the books AFP sells. And it is shocking—but hardly surprising—to learn that the banking industry is trying to put AFP out of business by adding it to a credit-card-processing blacklist.

A spokesman for the blacklisters said the reason for this financial war is that AFP sells “racist and anti-Semitic books,” namely those by Michael Collins Piper. Naturally, he hasn’t even read any of Piper’s books. If he had, he would know that there was never a single racist bone in Piper’s body.

Let’s define our terms here. “Racist and anti-Semitic” is a redundant expression. “Anti-Semitism” is a form of racism holding that Jews are biologically inferior because they are a “Semitic” people related to Arabs. Actually, neither Jews nor Arabs are their own race. Judaism is a religion professed by people from many races and cultures, while “Arabs” are simply the many different kinds of people, ranging from Sudanese blacks to blond-haired, blue-eyed Syrians and Lebanese, who happen to speak Arabic.

The pseudo-scientific racist theory known as “anti-Semitism” was popular in the 19th and early 20th centuries, but today, it is Arabs, not Jews, who are the main victims of this kind of racism. Ironically, the country with the worst anti-Semitic (anti-Arab) racism is the state of Israel.

As for Piper’s books, they contain no racial hatred or bigotry of any kind. They are critical of certain aspects of Jewish culture, specifically the ruthless tribalism that prevails among some Jewish-Zionist elites, especially those that work with the criminal underworld. That is cultural critique, not racism.

I am highly critical of the segment of the Arab-Muslim political elite that runs “Saudi” Arabia. That does not make me an anti-Arab or anti-Muslim bigot.

Freedom means nothing if we are not free to critique the culture and politics of the various power elites that rule our world. Piper saw the rising power of Jewish-Zionist elites in the U.S. and discussed the issue reasonably and rationally—if sometimes passionately—in an evidence-based fashion without any reference to or interest in “race.” His investigations into such issues as the JFK assassination and 9/11 were ahead of their time.

It is a national scandal, and a symptom of our national decline, that the whole banking establishment can wage an economic war aimed at the suppression of Piper’s books—without a peep of protest from the ACLU and the supposedly free speech-supporting mainstream media.

The economic assault on AFP is just the latest salvo in what is becoming an all-out Zionist war on free speech. Professor William Robinson’s book We Will Not Be Silenced: The Academic Repression of Israel’s Critics covers several Zionist attempts to quash academic freedom. Now they are targeting booksellers, not just academics.

When I was driven from the academy for questioning 9/11, I assumed I would be free to sell books and articles and solicit donations to support my independent scholarship and radio broadcasts. How could such activities ever be quashed? After all, we still have the First Amendment, right?

Unfortunately, the Constitution only limits the power of government, not the corporate sector. As private monopolies gobble up entire industries, grabbing as much power as governments but without any of the transparency or responsibilities, they have begun to insist that we toe their ideological line on pain of expulsion from the economy. A few months ago, Amazon banned hundreds of history books. At about the same time, my main fundraising platform and database (GoFundMe) closed my account and stole more than $1,000. Various Facebook accounts, including the Nation of Islam’s, have been frozen or shut down for political reasons. Now AFP is being blacklisted.

To buy and sell information, we will soon be microchipped with a “Mark of the Beast” guaranteeing that our views are inoffensive to the powers-that-be. Violators will be banned from economic transactions. They will still be free—free to starve.

Such evil acts of political censorship are exactly what we should expect from the too-big-to-fail financial pharaohs who seized the reins of power in America in the Federal Reserve coup d’état of 1913.

The lesson is clear: If we want to preserve what’s left of freedom in America, we need to overthrow the banksters in a Second American Revolution. 􀀀

How Anti-Semitism Is Weaponized 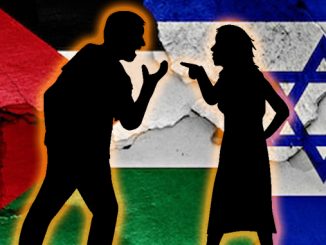