In an example of America’s rapidly eroding status as a First World nation, an outbreak of hepatitis A—serious enough to lead California’s governor to declare a state of emergency—has hit the homeless populations around both San Diego and Detroit, sickening at least 1,000 people. The general lack of cleanliness that leads to such disease outbreaks is an example of the powers-that-be failing to address problems impacting the rest of us “deplorables,” says one public health physician.

The breakdown of the United States is manifested in many ways, but perhaps no way illustrates the decline of this once-great nation more than its swelling homeless population, and, with it, diseases that were once seen only in Third World countries. The numbers back up what many of us suspect: According to the U.S. Department of Housing and Urban Development’s November 2016 Annual Homeless Assessment Report to Congress, “on a single night in 2016, 549,928 people were experiencing homelessness in the United States.”

Indicative of the disaster, two separate outbreaks of hepatitis A in California and Michigan that began last year and have killed dozens of people are threatening to spread across the country, and public health officials have very few tools in their arsenal to stop the wave of contagion.

On Oct. 13, California Gov. Jerry Brown declared a state of emergency, which will allow state health officials to buy additional doses of the hepatitis A vaccine to try to halt the outbreak, the country’s second largest in more than 20 years. The only one larger occurred in Pennsylvania in 2003, when almost 1,000 people caught hepatitis A from contaminated green onions.

The outbreak, which began in San Diego’s homeless community last year, has now spread into other regions. Los Angeles and Santa Cruz counties are now experiencing outbreaks. It has gotten so bad in San Diego that contractors have started blasting the city’s downtown streets with bleach.

Hepatitis A “is a viral infection that involves the liver and makes people sick for maybe a month or so,” Dr. Jane Orient, the chairman of the Pima County, Ariz. Medical Society’s Public Health Committee for about 30 years and the president of Doctors for Disaster Preparedness, told American Free Press in an exclusive interview.

“They become jaundiced, and they may have nausea and vomiting,” Dr. Orient continued. “It is generally a self-limited disease, although it is contagious, and people generally get over it and do fine and are immune to it afterwards. It is generally transmitted in contaminated food; it’s a fecal-oral route that is excreted in the stool, and if you contaminate the food with it then that’s how it’s usually transmitted—although the San Diego outbreak does not appear to involve food handlers, but rather people are getting it from the environment, because, I guess, in San Diego they have a particularly filthy environment.”

AFP asked Dr. Orient why a First World nation like the United States has seen 19 people die from the disease in the San Diego area and 14 people die so far in the Detroit area, with over 1,000 infected in both regions.

“I think that we’re just seeing a breakdown in our civilization,” she said, “which includes standards of cleanliness that have been accepted for decades at least and maybe for centuries. Why are we going back to the time when they denied the germ theory of disease?”

The germ theory of disease, Dr. Orient explained, “means that disease is transmitted by microscopic organisms that you can acquire by drinking dirty water or contamination of your food, that these are bacteria or viruses that grow and multiply in your body and that make you sick. This is the most important reason why Third World countries have such high rates of diseases: They do not have clean water and sanitation.”

AFP asked why she thinks the germ theory of disease is not being addressed by those in power.

“I think it’s a matter of political correctness that would involve critiquing things like allowing people to wander through the streets and live in a way that endangers the health of the whole population,” she explained. “It seems that there are people that care more about political correctness than they do about the health of the average American citizen. I think they consider themselves to be sort of immune: They’re protected, they live in an elite community, and they’re in charge of things. They’re not like the rest of us ‘deplorables,’ who are barely getting by on what we can earn in this de-industrializing society, and I think they just really don’t care about the average patient.”

AFP asked if she believes that unfettered immigration is contributing to this and other outbreaks.

“Oh, I think it definitely is,” she answered. “We have people coming into the country that are not screened medically in any way, and sometimes are deliberately dispersed throughout the country, and go to public schools and infect children with diseases to which the children have never been exposed before and they have no immunity.”

She continued: “That was probably responsible for outbreaks of hundreds of cases of the Enterovirus D68 (EV68) that sent a lot of American children to intensive care units. Some of them became paralyzed because it is a disease somewhat like polio to some people. This probably came in from Central America where it’s endemic in the population. It doesn’t usually make people [who live there] very sick because they have some immunity to it, but American children just don’t.”

As several California counties are offering free hepatitis A vaccine shots to the homeless in order to stem the tide of the outbreak, AFP asked Dr. Orient her opinion on the vaccinations, which are being almost forced on the homeless.

“I just think that mass imposition of any type of medical intervention is a very bad idea,” she said. “It’s contrary to our civil rights, and it’s also just a very imprudent idea, because a lot of times we don’t find out about the bad effects of the medical things we do until it’s too late.”

“I think that people who deny that vaccines can have lifelong disabling, very serious complications is rampant,” she said. “Vaccine manufacturers have virtually absolute immunity for any type of liability, so they’re really quite protected, even if they lie and cover up or are negligent about doing safety studies.”

American Free Press asked if the elites had a more nefarious agenda.

“I think there are people who really want to destroy the United States of America—to destroy our economic and our military power—because we’re the biggest impediment to their ideal of a global regime,” she said. “I think the United States is in serious danger, existential hazard really, of loss of the freedom on which our prosperity depends, as well as a decent civilized life.”

Dr. Orient summarized her feelings on this disturbing issue.

“Large populations are using the streets and outdoor areas as a toilet,” she said. “There used to be punishment for merely spitting on the sidewalk. If we tolerate Third World hygiene standards we will have Third World diseases. We have got to break the chain of transmission by just cleanliness. We don’t have a vaccine for every disease that exists. We can’t vaccinate everybody for everything.” 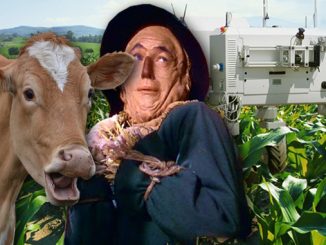