Following the FDA’s lengthy persecution of an Amish man in Kentucky, a judge has meted out an outrageous prison sentence for the herbal salve maker—despite the fact no victims were shown to have ever been harmed by his salves. Once again, pharmaceutical companies, as represented by the FDA, have won out over a peaceful citizen of  the United States.

LEXINGTON, Ky.—The Food and Drug Administration (FDA)’s decade-long persecution of an Amish man whose family enterprise specializes in the manufacture of home-made salves reached a disturbing conclusion on June 30 in the U.S. district court in Lexington, Ky., when he was sentenced to six years in prison for the crime of “mislabeling” and selling a natural remedy. 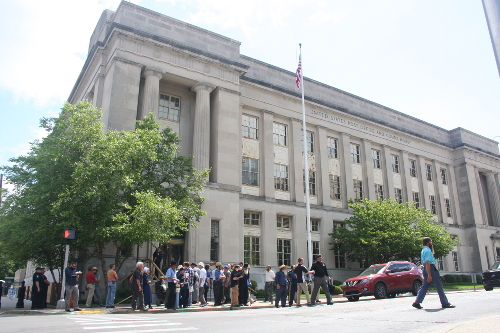 Samuel A. Girod, 57, was sentenced by Judge Danny Reeves to 72 months in prison to be followed by a supervised release period of three years, during which time he is prohibited from making and selling any product intended for medical purposes. Girod is also required to pay the court $14,000 in restitution and $1,300 in court fees, though the judge did not impose the potential fine of $25,000-$250,000 on the basis that doing so would impose undue hardship to the family.

The convoluted history of U.S. v. Girod traces back to 2001 when FDA agents first contacted Girod. After allegedly receiving an anonymous tip notifying them Girod’s product label asserted his topical tincture made from bloodroot was good for skin cancer, FDA agents informed Girod they considered this a medical claim that must be either irrefutably proven or altogether removed from his product label. Girod complied by amending the label.

In 2013, the FDA contacted Girod again, claiming a “victim” had been “harmed” by his salve.

However, during the investigation, no victim was produced and the salve in question was revealed to be from a different manufacturer. Still, Girod allowed FDA agents to conduct a warrantless search of his farm. A federal judge in Missouri then enjoined Girod’s products and ordered that no products could be sold until medical claims were removed, that Girod’s bloodroot salve could never be made available for sale, and that Girod must allow FDA inspections of his property for five years.

In late 2013, Girod refused an inspection and in 2014 began selling his products again, through a private members’ club.

The FDA began criminal proceedings against him for disobeying the injunction and added two more severe charges. FDA agents claimed that Girod and his family threatened them with physical violence when they returned for the second inspection, despite the fact that the sheriff’s deputy, who had accompanied FDA agents, testified under oath that no threats were made. Finally, Girod was also charged with witness tampering because he had sent a letter to customers explaining the facts of the lawsuit and apologizing for causing them distress.

During a jury trial, which concluded in March, Girod was found guilty on 13 charges: conspiracy to impede an officer, obstruction of a proceeding before an agency, failing to register with the FDA, eight counts of causing misbranded drugs to be introduced into interstate commerce, tampering with a witness, and failure to appear.

It’s important to note that the FDA’s classification of “drugs” here is based solely upon its insistence that Girod’s brochure for his salve, which quoted a customer’s testimonial that the product treated skin cancer, constitutes a medical claim. Therefore, according to the FDA, this salve, which anyone can produce in their own kitchen following one of numerous recipes readily available online with ingredients readily available at a local grocery store, is a “drug.”

Reeves explained that the court calculates the offense level in part based on the number of victims, though throughout the entirety of the hearing, the court did not reference a single one.

The FDA has a long track record of granting its seal of approval to substances produced by big pharma that have been proven to harm victims by the thousands annually. Yet it would seem that going after an Amish family business that produces a natural product, which has harmed no proven victims, that has been tested in the FDA’s own laboratories, and subsequently vindicated as both safe and natural, is what this government bureaucracy deems to be where the taxpayer dollars that help pay its budget are most gainfully prioritized.

It’s no great wonder that this has caused a major outcry among concerned Americans. Girod’s sentencing hearing on June 30—during which numerous security personnel were present in the courtroom, a bomb-sniffing dog was on hand, and Homeland Security officers were stationed outside—was attended by over 120 Amish men, women, and children from numerous communities around the nation, dozens of activists, and numerous reporters for both local and alternative news outlets, filling the courtroom to capacity. 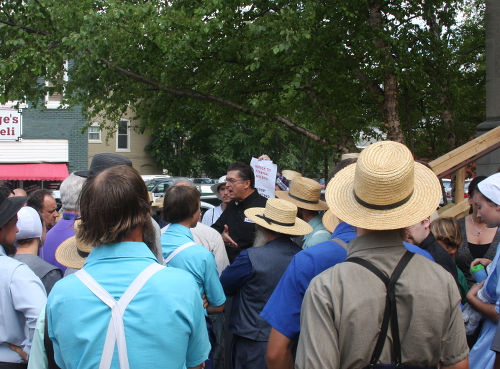 Perhaps the most recognizable face amidst the large number of supporters was former sheriff and Constitutional Sheriffs and Peace Officers Association founder Richard Mack (pictured in the photograph above speaking to the crowd), who has 20 years’ experience in law enforcement and one year working in narcotics.

This writer interviewed Mack about the Girod proceedings.

According to Mack, the sentencing guidelines for Girod outlined by Reeves were absurdly in excess of those for crimes of equal severity committed by repeat offenders. He added that in all his years of experience in law enforcement he had never seen a first-time offender be sentenced in such a draconian fashion. What’s more, he pointed out, actual drug dealers often only get 5-10 years prison time when convicted.

Girod, who represented himself for the majority of his case, asserted his rights as a sovereign citizen at numerous points during the hearing, responding to every question directed at him by the court with the words: “I do not waive my immunity to this court. I do not consent.”

During sentencing, as if to refute the widespread cries of foul play from the public, Reeves claimed: “This is not about the government coming down on a man who just wants to sell salve. It’s about a man that has no respect for the rule of law.”

Reeves spoke of a prevailing need to “protect the public from any future crimes of the defendant.”

Conspicuously absent during the trial, however, was so much as a single example of an actual victim, past or present.

Also noteworthy was the candor of the prosecution. Two statements by federal prosecutor Kate Smith were particularly indicative of an overt agenda on which the FDA and the court were in painfully apparent collusion.

“He has not accepted responsibility for his actions,” she claimed, followed by, “The government has put a lot of money into this case and I would hate to see Mr. Girod released—and be back in here for the same thing.” 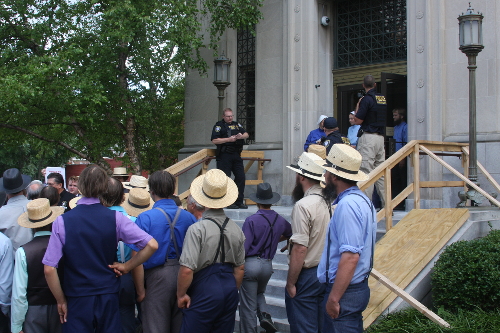 Supporters both inside the courtroom and assembled outside—some of whom carried signs and placards that read “Notice to Feds: Stop targeting our peaceful Amish neighbors”—gathered in front of the courthouse immediately afterward, as local news cameras rolled and activists livestreamed the gathering.

Mack’s vociferous denunciation of Reeves’s decision rang out in front of the news cameras. His bold words were met with equally exuberant applause and cries of “Amen!” from scores of the Amish present.

Mack called for intervention by officials like Sen. Rand Paul (R-Ky.), Girod’s own senator. Having spearheaded numerous successful efforts to vindicate Amish people being targeted by the FDA thus far, Mack is also calling for both congressional and presidential commissions to investigate not just this, but all similar cases.

“This has nothing to do with safety,” said Mack. “The only crime committed here is that a family has been torn apart. . .. Every American has something to fear after this.”

When asked to comment on the sentencing outcome, Girod’s father told AFP, “The Constitution isn’t working anymore. This is all on the government.”

Another Amish community leader added: “It is a slap in the face to the Amish to send him to prison . . .. [Sheriff Mack said] that [Sam] is being lied about and railroaded. Sam did not have a fair trial. If he’d had an attorney he could have had a fair chance.” 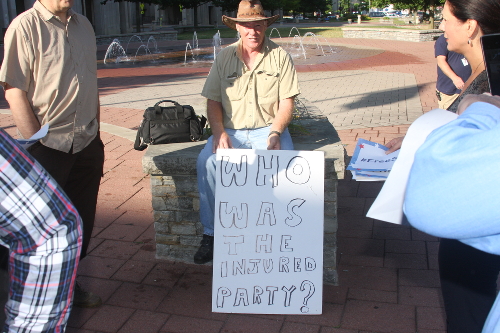 The palpable spirit of righteous indignation evident in the gathered protestors was well summarized in the statements of Mrs. Sally Oh, who has covered the Girod case from its outset and writes for the Kentucky Free Press:

“There are no victims. Sam didn’t hurt anybody. The only victim here is the FDA, if you can even call them victims. The most egregious counts against him are based on common law: ‘Don’t hurt people and don’t take their stuff.’ Sam did none of those things. This is a clear case of the FDA flexing its muscle and throwing its weight around.”

There is still a chance for the ruling against Girod to be appealed to the 6th Circuit. Considering that five lawyers have offered to take his case pro bono and numerous others at a reduced rate since his conviction, he may yet have an opportunity to turn this around. But whether or not Girod, who didn’t trust lawyers to begin with, can trust any representatives of a legal system that has so recently trampled his rights into the mud remains to be seen.

Jacob Tyler is a freelance writer and web designer.

11 Comments on Amish Healer Sentenced to Six Years in Prison