On Jan. 20, Donald Trump was inaugurated as the 45th president of the United States. AFP was there, covering the historic event right from the Capitol grounds. Read our on-the-scene report from AFP’s roving editor Mark Anderson and listen to his comments and interviews with Americans who were there to witness the swearing-in and the parade.

WASHINGTON, D.C.—Donald John Trump took to the podium on the Capitol building’s west side with a look described by Connecticut resident Ann Marie Murray as one of “humility”—just before Trump was sworn in Friday as the 45th president of the United States by Chief Justice John Roberts.

The event clearly was seen as inspiring by many. Chicago resident Doug Sparkman, moments after Trump’s inaugural address, agreed that he found Trump’s remarks to be rather “Jeffersonian,” in the sense of being people-based. In that vein, he yearns for a country run on the basis of principle, not party. And given what he heard in Trump’s address, he feels that’s possible under the new administration.

“Action, and putting politics aside, is what we really need for this country,” Sparkman added. 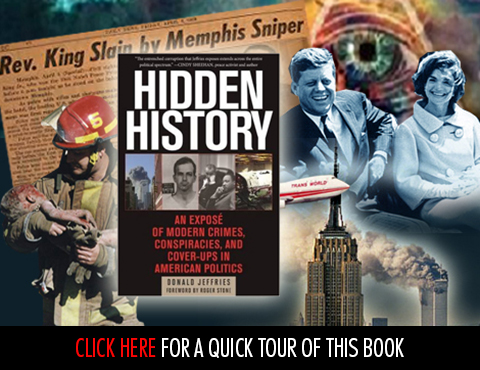 With the whole inaugural ceremony some 20 minutes behind schedule, Trump and his family, looking regal and acting highly anticipatory of the challenges that await them, arrived at the Capitol around 11:15 a.m. The new first lady, Melania, was escorted to the west balcony to be seated first, wearing a stunning high-necked blue outfit that brought “oohs” from many in the massive crowd—whose view was aided by large screens on both ends of the Capitol.

Trump himself, appearing reflective and solemn, emerged alongside Speaker of the House Paul Ryan and House Majority Leader Kevin McCarthy and was seated at 11:32. As the somewhat chilly day spat a little rain here and there, you could feel the heavy anticipation to hear Trump take the oath of office. And soon after former Indiana Gov. Mike Pence was sworn in as vice president by Supreme Court Justice Clarence Thomas, Trump proceeded to begin taking his oath when a group of six agitators erupted in a flurry of slogans and declarations—precisely when Trump began repeating the words “I do solemnly swear . . .”

This writer, some 10 feet from the protestors in the section eight seating area reasonably close to the presidential podium, could see the anguish on the faces of many of the nearby inaugural attendees, a number of whom traveled long distances to hear their new president take the oath. But from their vantage point, Trump’s exchange with Roberts was largely drowned out. It’s a testimony to the manners and restraint of the pro-Trump attendees that they did not “escort” the protestors out by force.

And as the protestors were escorted out by security for being highly disruptive—not to negate their right to dissent—you could sense the thud of cannon fire that accented the seating of a new president, who, without saying a word about the disruption of such a pivotal moment, unflinchingly gave an inaugural address that many found to be concise, heartfelt, and inspiring.

Trump immediately noted that he and his administration will undertake a “great national effort to rebuild our country and restore its promise for all of our people.” He continued, “Together, we will determine the course for America and the world for many, many years to come.”

He added: “For too long a small group in our nation’s capital has reaped the rewards of government, while the people have borne the cost. Washington flourished but the people did not share in its wealth. Politicians prospered but the jobs left and the factories closed. The establishment protected itself. . . . Their victories have not been your victories. Their triumphs have not been your triumphs. And while they celebrate in our nation’s capital, there was little to celebrate for struggling families all across our land.”

He continued, “That all changes, starting right here and right now,” while the crowd erupted into especially loud applause as the new president also said to them: “This is your day. This is your celebration. And this, the United States of America, this is your country. What truly matters is not which party controls our government but whether our government is controlled by the people. Jan. 20, 2017 will be remembered as the day the people became the rulers of this nation again.”

And as more sustained applause subsided, Trump went on: “The forgotten men and women of our country will be forgotten no longer. Everyone is listening to you now. You came by the tens of millions to be part of an historic movement, the likes of which the world has never seen before. At the center of this movement is a crucial conviction—that a nation exists to serve its citizens. Americans want great schools for their children, safe neighborhoods for their families, and good jobs for themselves.

“These are just and reasonable demands of righteous people . . . but for too many of our citizens a different reality exists: Mothers and children trapped in poverty in our inner-cities; rusted-out factories, scattered like tombstones across the landscape of our nation; an education system flush with cash but which leaves our young and beautiful students deprived of all knowledge. And the crime, and the gangs, and the drugs that have stolen too many lives and robbed our country of so much unrealized potential. This American carnage stops right here and stops right now. . . .

“The oath of office I took today is the oath of allegiance to all Americans,” he added, drawing still more applause. “For many decades we’ve enriched foreign industry at the expense of American industry, subsidized the armies of other countries, while allowing for the very sad depletion of our military. We’ve defended other nations’ borders while refusing to defend our own . . . and spent trillions and trillions of dollars overseas while America’s infrastructure has fallen into disrepair and decay. We’ve made other countries rich while the wealth, strength, and confidence of our country has dissipated over the horizon.”

Listen to AFP’s candid interviews with regular Americans, who were there to witness the inauguration, by clicking on the image below.

John Medved of Golden, Colo., speaking with AFP, said of Trump’s speech minutes after its conclusion: “I think Mr. Trump, our president, said everything that everybody’s been thinking for the last eight years. . . . And finally it feels like the sun came out and we can go ahead and think what we really think and try to make our country great again.”

“It really was a move of God, this whole election,” Ann Marie Murray, from Connecticut, also said, echoing remarks that Medved and other people shared with this AFP writer as everyone departed Capitol Hill.

And early on, before the sun even rose, Nevin Shafer of Florida remarked that he expects from Trump: “Normal stuff, like balanced budgets and secure borders. I do believe if you don’t have borders, you don’t have a country.”

Mark Anderson is AFP’s roving editor. When not traveling for AFP, he spends his time between Michigan and Texas.