The New York Times admits that U.S. government approves what stories go into the rag.

The First Amendment to the Constitution guarantees freedom of the press. The Bill of Rights was added when states’ rights advocates and populists worried freedoms would need protecting from an ever-expanding federal government. That freedom would eventually need protecting from the press itself seemed unthinkable. Yet, as The New York Times has shown, the mainstream media keeps burying the last remaining vestiges of its greatest protection with its own shovel.

After running a June 15 story about recent American innovations in cyberwarfare and the way they are applied against Russia’s power grid, President Donald Trump charged that, by printing the story, The New York Times had committed treason. In direct response, the Times confirmed to the president that it had run the story by U.S. officials before printing it.

“Accusing the press of treason is dangerous,” the Times responded on Twitter. “We described the article to the government before publication. As our story notes, President Trump’s own national security officials said there were no concerns.”

The predominant spin put on the story by the MSM conglomerates was the typical furtherance of the “Trump versus the Press” narrative. But, as Ben Norton wrote at news website “Consortium News,” the media completely missed the point of the Times’s accidentally transparent response.

“But what was entirely overlooked was the most revealing thing in The New York Times’s statement: The newspaper of record was essentially admitting that it has a symbiotic relationship with the government,” Norton wrote.

As Norton points out, one of the great enemies of press freedom is Washington Post columnist Marc Thiessen, a neoconservative who served as a speechwriter for President George W. Bush. Thiessen notably called WikiLeaks’s Julian Assange a “spy” who “deserves prison.” He emphasized that Assange is “not a journalist.” Thiessen’s reasoning regarding Assange’s lack of journalistic credentials was even more troubling.

Thiessen wrote that unlike “reputable news organizations, Assange did not give the U.S. government an opportunity to review the classified information WikiLeaks was planning to release so they could raise national security objections. So responsible journalists have nothing to fear.”

The truth, however, is that responsible journalists have had much to fear since reporter Carl Bernstein, the co-author of All the President’s Men, first wrote in a 1977 Rolling Stone magazine article that the mainstream media had been thoroughly infiltrated and corrupted by the Central Intelligence Agency (CIA).

Using documents on file at the CIA, Bernstein referenced “more than 400 American journalists who in the past 25 years have secretly carried out assignments for the Central Intelligence Agency.” Bernstein traced the influence as far back as 1953 when syndicated columnist Joseph Alsop was sent to the Philippines to cover a national election. Alsop was not asked to cover the story on-site by the newspapers that ran his column. He was asked to go by the CIA.

There were organizations more influenced by the CIA than others. “By far the most valuable of these associations, according to CIA officials, have been with The New York Times, CBS, and Time Inc.,” Bernstein wrote. While the article is still seen as a giant leap forward in the practice of “watching the watchmen,” Bernstein can rightly be criticized for not once mentioning his former employer, The Washington Post, and his former partner, Bob Woodward, in the article. Both have long been tied to the high-level influences of the CIA, the U.S. Department of Defense, and the FBI.

The CIA influence stems from Operation Mockingbird, a 1950s program initiated by the CIA to infiltrate, influence, and sway powerful media organizations to run propaganda advantageous to the CIA and the financiers that fund its covert operations.

The most obvious reasons for the most recent acquiescence to official government sources are grounded in relationships. The journalistic corps is becoming younger and less experienced. In the competitive, dying industry that is mainstream print journalism, reporters feel they need to sow the seeds of partnership in order to get those calls that turn into the cultivation of high-level sources who feed them exclusive stories. Presidents from LBJ to Nixon to George W. Bush to Obama to Trump have used the power of access to bar “unfriendly” press outlets from press conferences and events. Thiessen was wrong in describing the relationship as a responsibility of a “good journalist” or a “real journalist,” but the pressure to maintain access is real.

It is difficult to believe that Ben Franklin would have run a story past Massachusetts Gov. Thomas Hutchison before printing it. Ida Tarbell surely didn’t run her exposé on Standard Oil past John D. Rockefeller before printing it in McClure’s magazine. They understood that for freedom of the press to truly exist, reporters and editors need to exercise those very freedoms with which they have been endowed. 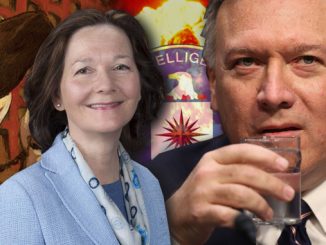 Pompeo and Haspel are Symptoms of a Deeper Problem