Stopping the annual $1.3 billion “bribe” the U.S. has been giving Pakistan for years could spell trouble for U.S. efforts in Afghanistan. Without any allies on bordering the country, movements of equipment and supplies will be much more difficult. Giraldi explains why, for the time being, Pakistan is worth it.

The Trump administration has announced that it will be stopping the subsidies given to the Pakistani government since the war against the Soviet Union in Afghanistan in the 1980s. The payments increased dramatically after 9/11 as Pakistan became the launching pad for U.S. efforts to overthrow the Taliban and destroy al Qaeda. They have continued since that time and currently amount to a considerable $1.3 billion a year, a sum which more or less buys the compliance of the country’s military, which serves as something like a Praetorian Guard for the nation’s civilian leaders. The money is forthcoming with the understanding that the Pakistan government, army, and security services will cooperate with the United States in efforts to stabilize the situation in neighboring Afghanistan while also combatting the possible resurgence of radical Islamic groups in the region.

President Donald Trump has tweeted his decision in characteristic fashion, stating, “The United States has foolishly given Pakistan more than $33 billion in aid over the last 15 years, and they have given us nothing but lies and deceit, thinking of our leaders as fools. They give safe haven to the terrorists we hunt in Afghanistan, with little help. No more!”

Trump’s judgment, tersely expressed, is not exactly wrong, nor is it exactly right. American policymakers who had a basic understanding of the politics of central and south Asia understand that Washington’s bilateral relationships with countries in the region are based on mutual interests, which means that they can diverge when conflicting interests get in the way. Pakistan has long been nervous about the instability in neighboring Afghanistan, which means it is supportive of some efforts at reconstruction and political reconciliation by its neighbor, but it also believes the political turmoil to be endemic, partly due to the tribal and ethnic rivalries that cannot be erased through top-down, foreign-instigated regime change.

As a result, Islamabad has had from the start its own secret arrangements with Afghan groups that are protected and even sheltered inside Pakistan, which are loyal to Islamabad and not to whomever is in charge in Kabul. This includes the Haqqani Network, which functions virtually as a semi-independent arm of the feared Pakistani Intelligence Service (ISI). The Haqqanis have been involved in large-scale drug trafficking and have waged their own war inside Afghanistan against the country’s police and military. They have also been accused of bombings in Kabul as well as attacks on U.S. and other NATO soldiers.

The Pakistanis clearly see having a viable major player inside Afghanistan as a national interest that weighs more heavily than whatever it is doing with the United States. To be sure, Pakistan’s major effort to eliminate its own Taliban in 2014 was only a partial success and resulted in numerous casualties while its semi-autonomous tribal region continues to be both radicalized and restive. Pakistan’s leaders reason, and have occasionally suggested, that they and their Afghan proxies will still have to deal with what is going on in the region long after the United States becomes tired of the effort and goes home. It is not an unreasonable point of view, nor is it reasonable to expect that Washington will continue to subsidize a country that is working contrary to U.S. interests, even if those interests have been unattainable.

And even if the Pakistanis are currently playing a two-faced game it is important to recall what benefit has derived from the relationship. Without Pakistan’s cooperation the Soviets would never have been driven out of Afghanistan in the first place. In the years after 9/11, when the U.S. mission was to destroy al Qaeda, nearly every major arrest or killing of senior cadre of the group took place in Pakistan and was carried out by the Pakistani police and intelligence services. Subsequently, Islamabad allowed the U.S. to set up secret drone bases inside Pakistan, something that was revealed accidentally by former Rep. Jane Harman (D-Calif.), to track and kill suspected terrorists.

Currently, Pakistan serves as the conduit whereby U.S. and other allied forces are supplied with fuel, heavy equipment, and other war-making commodities. Most supplies arrive at the port of Karachi and are trucked through the mountains on Pakistani-provided vehicles to Afghanistan. If Pakistan chooses to play hardball with Trump, it can cut off that supply line immediately and the U.S. effort to stabilize and democratize Afghanistan—if it might be called that—would be over.

In another part of the world, the Trump administration is considering cutting off its aid to the Palestinian Authority and is delaying payment of $125 million currently due. Trump has tweeted  “[W]e pay the Palestinians hundreds of millions of dollars a year and get no appreciation or respect. They don’t even want to negotiate a long overdue peace treaty with Israel. We have taken Jerusalem, the toughest part of the negotiation, off the table, but Israel, for that, would have had to pay more. But with the Palestinians no longer willing to talk peace, why should we make any of these massive future payments to them?”

The threat over money appears to derive from Amb. Nikki Haley’s threatened “revenge” over recent UN votes. The president’s bizarre beliefs that Israel wants peace and that stealing Arab Jerusalem and granting it to Benjamin Netanyahu is some kind of gift is breathtaking, but one of his aides might well advise him that much of the money given to the Palestinian Authority is used to man and train a police force, which largely exists to keep Palestinians from attacking Israelis. Trump’s Zionist supporters are already cheering the decision but will find that it yields bitter fruit if the West Bank erupts in violence. The reality is that Washington should spend money when there are good reasons to do so.

Is Pakistan worth it? Yes, until the day comes when Washington departs the region. Afghanistan costs something like $100 billion per year, and the Pakistani bribe is a minimal expense.

The similar bribe to provide some separation between Palestinians and Israelis is a different game altogether. Its utility as yet another costly measure to protect an intransigent Israel is certainly debatable.

Philip Giraldi is a former CIA counter-terrorism specialist and military intelligence officer and a columnist and television commentator. He is also the executive director of the Council for the National Interest. Giraldi also submits articles that can be found on the website of the Unz Review. 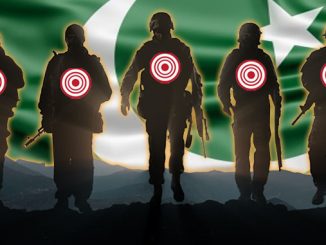