Is the radical Israeli government helping the Saudis build nuclear weapons? According to a new report in the online news and commentary website “Middle East Monitor,” an Israeli writer is blowing the whistle on a secret deal between Israel and Saudi Arabia to sell detailed information on how to build a nuke.

“This information should shock us,” Ami Dor-on wrote in a whistle-blowing column posted online at the “News One” website, “as we see the world is changing for the worse, following the race for the possession of nuclear weapons that pass right over our heads in the Middle East.”

Dor-on claims that the Saudi push to go nuclear stems from concerns that Iran is building its own arsenal, despite the fact that objective nuclear scientists along with U.S. intelligence agencies contend Iran abandoned its nuclear weapon program back in the early 2000s. Also, the Saudis believe that President Donald Trump’s closeness to Israeli Prime Minister Benjamin Netanyahu means the U.S. will not move to block the deal.

In the 1960s, Israel stole nuclear technology from the United States and other countries in order to develop its own arsenal. AFP writer and editor Michael Collins Piper, who passed away in 2016, documented the thefts in his book The Golem: Israel’s Nuclear Hell Bomb and the Road to Global Armageddon. Piper also argues in Final Judgment: The Missing Link in the JFK Assassination Conspiracy, the book he is perhaps best known for, that President John F. Kennedy objected to Israel’s theft of U.S. nuclear secrets. As a result of that, the Israelis, with the help of organized crime and other elements, orchestrated Kennedy’s assassination.

For years, Israeli officials tried to cover up the fact that it has a nuclear arsenal of as many as 400 missiles. Long considered to be one of the worst kept secrets in the Middle East, Israel’s nuclear weapons have been acknowledged by multiple Israeli leaders as well as the Pentagon.

The Saudis have long sought to develop nukes, according to multiple reports. It is well known that the Saudis helped the Pakistanis steal nuclear secrets so the country could develop its own bombs.

More recently, Saudi Crown Prince Muhammad bin Salman, while visiting the U.S., asked the Trump administration for permission to begin enriching uranium to weapons-grade so that it could begin its own nuclear program.

A nuclear race in the Middle East should be a concern for world powers, including the U.S., Russia, and China.

Up until Trump pulled the U.S. out of the nuclear deal with Iran, Iran had been barred from enriching uranium to create its own weapons. Much has been made about Iran secretly having a nuclear program hidden away in military sites such as Parchin. In 2015, however, nuclear inspectors entered Parchin to quietly conduct inspections alongside the Iranians. Iran has promised to abide by the deal despite the U.S. rejecting it.

A nuclear-free world is in everyone’s interests and is something that all countries should back. 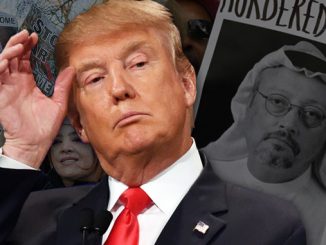