The Department of Justice officially filed an appeal of a Florida judge’s ruling earlier this week that the CDC exceeded its authority in issuing a federal mask mandate, a controversial policy that has caused much debate and outright conflict across the country.

U.S. district judge Kathryn Kimball Mizelle, a Trump appointee, issued a ruling on Monday that determined the mask mandate exceeded the Constitutional authority of federal officials, prompting airline carriers, TSA officials and other transportation agencies to announce they would no longer enforce the mask mandate. Mizelle argued that the CDC, who originally issued the controversial mask mandate, “failed to justify its decision and did not follow proper rule-making procedures,” according to reporting from the Guardian.

Passengers on a Delta Airlines flight cheer after the end of the federal mask mandate is announced.pic.twitter.com/DflsPxkWqP

Mizelle’s ruling argues that the mask mandate “exceeds the CDC’s statutory authority and violates the procedures required for agency rulemaking” outlined in the Administrative Procedure Act (APA). The Biden administration announced that the mandate would no longer be enforced while the Department of Justice (DOJ) said it would appeal the ruling if the CDC “concludes that a mandatory order remains necessary for the public’s health,” which the agency officially did on April 20.

“The Department of Justice and the Centers for Disease Control and Prevention (CDC) disagree with the district court’s decision and will appeal, subject to CDC’s conclusion that the order remains necessary for public health,” a DOJ statement explained. “The Department continues to believe that the order requiring masking in the transportation corridor is a valid exercise of the authority Congress has given CDC to protect the public health. That is an important authority the Department will continue to work to preserve.”

The DOJ officially filed an appeal in federal court in Tampa on April 20 “in light of today’s assessment by the CDC that an order requiring masking in the transportation corridor remains necessary to protect the public health,” DOJ official Anthony Coley stated.

The DOJ’s decision to appeal Mizelle’s ruling was criticized by Tori Emerson Barnes, the executive vice-president of public affairs and policy for the U.S. Travel Association, an industry lobbying group.

“Masks were critically important during the height of the pandemic,” Barnes said, “but with low hospitalization rates and multiple effective health tools now widely available, from boosters to therapies to high-quality air ventilation aboard aircraft, required masking on public transportation is simply out of step with the current public health landscape.”

On March 23, Airlines for America, a lobbying organization that represents some of the top airlines in America, issued a public letter to President Biden, urging him to lift the mask mandate as well as testing requirements for airline passengers.

“It makes no sense that people are still required to wear masks on airplanes, yet are allowed to congregate in crowded restaurants, schools and at sporting events without masks, despite none of these venues having the protective air filtration system that aircraft do,” the letter read in part.

The letter also lamented the fact that “the burden of enforcing both the mask mandate and predeparture testing requirements has fallen on our employees for two years now,” which has resulted in “daily challenges by frustrated customers.”

Indeed, as an article and graph published by Statista detail, the federal mask mandate led to an incredible surge of unruly passengers and conflicts on flights in recent years:

U.S. airlines saw a dramatic increase in incidents involving unruly passengers last year, the vast majority of which related to the mask mandate and passengers’ refusal to comply with it. Airline crews reported almost 6,000 unruly passenger incidents to the FAA in 2021, 4,290 of them involving masks. 1,099 of those incidents resulted in FAA investigations for violations of federal aviation regulations and/or federal laws, which is the case when passengers “assault, threaten, intimidate, or interfere with a crewmember.”

FAA chief Steve Dickson told ABC News last year that “in a typical year, the agency will end up taking this type of enforcement action in about 100 to 160 enforcement cases”, before adding that “what is really new is the volume that we’re seeing right now”. Worryingly, in addition to the number of incidents increasing, they are also becoming more violent. The situation even prompted some airlines including Southwest and American to temporarily ban alcohol sales, as alcohol consumption was involved in many cases of passenger unrest. 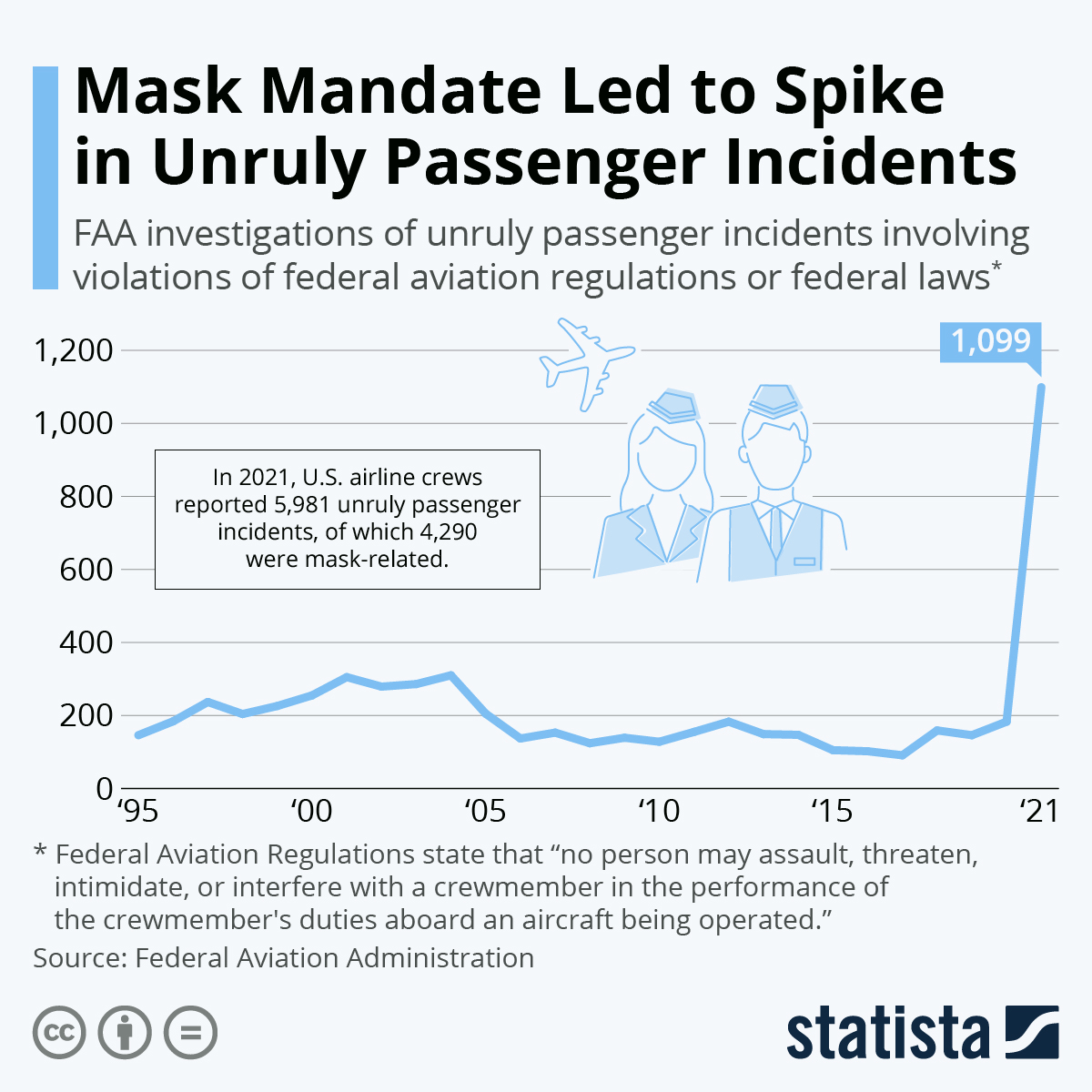 Patrick Wood, the founder and executive director of Citizens for Free Speech, was one of many who applauded the recent court ruling striking down the federal mask mandate.

“We have been arguing for nearly two years that the First Amendment rights of the American people were being trampled by Biden’s order,” Wood explained. “At first they tried to use science as the basis for these muzzles on public transportation, and when the science didn’t stand up, they switched to full-on authoritarianism. The CDC admitted that cloth masks were useless against coronavirus, and yet they continued to force compliance in a blatant abuse of power.”

Wood hopes that the DOJ’s appeal fails and the mask mandates end for good.

“We have seen enough of private citizens being treated like criminals for trying to breathe free air in airports, on flights and in other public spaces,” Wood stated. “And we have seen enough of untrained employees trying to act as law enforcement agents. American citizens have the right to free speech and free expression, and that includes the right to decide if they want to cover their faces with useless cloths all to help the federal government continue to push their propaganda campaign of fear. CFFS will continue its campaign of influence on federal legislators until all unconstitutional mandates are lifted.”