“We were devoid of a fundamental understanding of Afghanistan. We didn’t know what we were doing.” So said Gen. Douglas Lute, who oversaw the U.S. war on Afghanistan under Presidents Bush and Obama. Eighteen years into the longest war in U.S. history, we are finally finding out, thanks to thousands of pages of classified interviews on the war published by The Washington Post last week, that Lute’s cluelessness was shared by virtually everyone involved in the war.

What we learned in what is rightly being called the “Pentagon Papers” of our time, is that hundreds of U.S. administration officials—including three U.S. presidents—knowingly lied to the American people about the Afghanistan war for years. This wasn’t just a matter of omitting some unflattering facts. This was about bald-faced lying about a war they knew was a disaster from almost day one.

Remember Bush’s Defense Secretary Donald Rumsfeld? Remember how supremely confident he was at those press conferences, acting like the master of the universe? Here’s what he told the Pentagon’s special inspector general who compiled these thousands of interviews on Afghanistan: “I have no visibility into who the bad guys are.”

It is not only members of the Bush, Obama, and Trump administrations who are guilty of this massive fraud. Falsely selling the Afghanistan war as a great success was a bipartisan activity on Capitol Hill. In the dozens of hearings I attended in the House International Relations Committee, I do not recall a single “expert” witness called who told us the truth. Instead, both Republican- and Democrat-controlled Congresses called a steady stream of neocon war cheerleaders to lie to us about how wonderfully the war was going. Victory was just around the corner, they all promised. Just a few more massive appropriations and we’d be celebrating the end of the war.

Congress and especially congressional leadership of both parties are all as guilty as the three lying administrations. They were part of the big lie, falsely presenting to the American people as “expert” witnesses only those bought-and-paid for Beltway neocon think-tankers.

What is even more shocking than the release of this “smoking gun” evidence that the U.S. government wasted $2 trillion and killed more than 3,000 Americans and more than 150,000 Afghans while lying through its teeth about the war is that you could hear a pin drop in the mainstream media about it. Aside from the initial publication in the Post, which has itself been a major cheerleader for the war in Afghanistan, the mainstream media has shown literally no interest in what should be the story of the century.

We’ve wasted at least half a year on the Donald Trump impeachment charade—a conviction desperately in search of a crime. Meanwhile one of the greatest crimes in U.S. history will go unpunished. Not one of the liars in the “Afghanistan Papers” will ever be brought to justice for their crimes. None of the three presidents involved will be brought to trial for these actual high crimes. Rumsfeld and Lute and the others will never have to fear justice. Because both parties are in on it. There is no justice.

Just days after the “Afghanistan Papers” were published, only 48 members of Congress voted against the massive military spending of the 2020 National Defense Authorization Act. They continue as if nothing happened. They will continue lying to us and ripping us off if we let them.

U.S. People Have Been Lied to About the War in Afghanistan

A trove of secret Pentagon papers confirms that the two decades-old Afghan War has not only cost over $1 trillion, as well as thousands of American lives and an untold number of Afghan lives, it was based on lies, told over and over again during three presidencies. The lies were told by politicians, generals, bureaucrats, and the mainstream media.

Perhaps the biggest lie was that the war was about our national security, about ridding Afghanistan of al Qaeda. The fact is that after al Qaeda fled into the Tora Bora mountains of Afghanistan during the early days of the U.S. invasion of Afghanistan, they never again had a foothold in the country, but the U.S. turned its military might on the Taliban just as Washington announced an invasion of Iraq. The fact is that the U.S. was never going to defeat the Taliban, but no one in power was prepared to admit that. When the U.S. eventually leaves Afghanistan, the Taliban will be the victors, along with their backer, Pakistan. That is something the U.S. military has known for a long time but has refused to concede publicly. Instead, generals and politicians opted for surges, with plenty of bipartisan backing in Congress. From Bush to Obama, and now Trump, the deception has been ongoing. But the game is up and it is time for the American public to demand answers of their elected leaders. The chance of that happening is slim, since the media and Congress have shown little appetite for discussing the issue.

This is all part of an emerging story from what are being called the “Afghan Papers,” documents acquired after a three-year court battle by The Washington Post to pry them from the Pentagon. The papers are from an investigation by the Office of Special Inspector General for Reconstruction (SIGAR). Over several years, SIGAR interviewed more than 300 people connected to various elements of decision-making in the Afghan conflict. The SIGAR findings are being compared to the leaked “Pentagon Papers” of 1971 that lifted the lid off the Vietnam War to expose similar deceptions. The parallels between the two foreign wars are hard to ignore, and many military families are left asking the same questions military families once asked about the Vietnam War. Questions like, what did our sons and daughters die for, and what was this war really about?

The Afghan people are surely asking similar questions, wondering how many of their countrymen and women died over the past 20 years of conflict during which the Pentagon refused to release the actual Afghan casualty figures. This also happened during the Iraq War. The bottom line is that the Pentagon hid the truth about the real course of the conflict, including issues related to massive fraud in the use of money allocated for reconstruction projects. Evidence was swept under the carpet. Bush and Obama in particular ignored the warning signs and continued to talk about nation-building in Afghanistan when they must have known from secret Pentagon reports that it was mere fantasy.

In light of the “Afghan Papers” release, Gold Star families are asking the hard question about their losses, but there may be no appetite in Congress to admit guilt or even to address the questions. Military families that have suffered losses or are left caring for wounded veterans are entitled to demand special compensation for suffering resulting from conflict based on lies. However, support for such a move may not be overwhelming on Capitol Hill. The U.S. military casualty figures are 2,300 with 20,589 wounded—an enormous amount of loss to compensate.

If one were to distill what it is most striking about the SIGAR papers, it is that the American public has been isolated from the decision-making process for too long. In a recent issue of Time magazine, Elliot Ackerman, a highly decorated veteran of the Iraq and Afghan Wars put it this way: “Is it a coincidence that in our history the wars we’ve decisively won—such as the Civil War and First and Second World Wars—were largely fought by citizen soldiers, who would never abide our cyclical quagmires?”

Veterans are understandably angry about the revelations. Military newspaper Stars and Stripes points out that veterans have always known that a “disinterested American public” was being deceived about the war. Trump is, however, confident that he can reduce the troop numbers in Afghanistan by 4,000, with or without a deal with the Taliban. The rhetoric is familiar and the Taliban has heard it before. It holds the ace cards and is biding its time until there is a full U.S.-NATO capitulation, which is a foregone conclusion. The only thing remaining to be set is a withdrawal date. According to Defense Secretary Mark Esper, troops being removed from Afghanistan will be retrained and “redeployed to the Indo-Pacific to face off our greatest challenge in terms of the great power competition that’s vis-à-vis China.”

If Trump is contemplating a war with China, it is one we could lose, with potentially massive casualties. Before it begins, the American public should demand to know if our leaders are really ready for such a conflict. 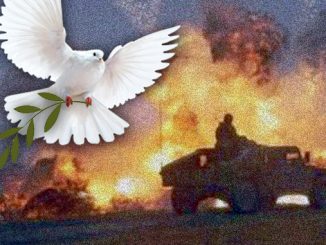 4 Comments on Crime of the Century: The Afghanistan War