After Syria, President Trump looks to exact even more peace in the Middle East as evidenced by U.S. talks with Taliban officials to “complete the Afghanistan reconciliation process.” We would do well to remember the real reason we went to war in the first place.

Much of the clamor that has existed in the media of late has been the debate over the Trump decision to move toward ending U.S. involvement in Syria. All but ignored by the same media and politicians have been the recent overtures for peace in Afghanistan that have existed between the U.S. and the Taliban.

In December, American representatives met with Taliban officials in the United Arab Emirates. They will meet again in the Persian Gulf to “complete the Afghanistan reconciliation process.” This is a historic step forward in the process to resolve America’s longest ongoing war. Yet the media has become blinded by the Russian angles of Syrian intervention.

The United States invaded Afghanistan on Oct. 7, 2001, almost one month after the attacks of 9/11. The publicly stated mission was to destroy al Qaeda’s stronghold in Afghanistan by dethroning the Taliban throughout the region. Now, at over 17 years, the war in Afghanistan is America’s second longest war. The Vietnam War lasted 19 years.

Reports have stated that the recent peace talks were initiated by the Trump administration. Pakistan has taken credit for urging the Taliban officials to re-engage in response. Negotiations over talks have existed from other administrations in the 17 years, but they fizzled quickly. The December talks produced positive results.

The Emirates News Agency said that the recent Abu Dhabi talks “fructified in tangible results that are positive for all parties concerned.”

The U.S. special envoy for Afghan reconciliation, Zalmay Khalilzad, was predictably optimistic about the talks. The Taliban spokesman, Zabihullah Mujahid, agreed with the assessment.

“Future negotiation meetings shall continue after deliberations and consultations by both sides with their respective leaderships,” Mujahid said.

For the Taliban, the focal point of the negotiations is the withdrawal of all NATO and U.S. forces from Afghanistan. Mujahid denied that rumored items such as future elections, peace talks with Kabul, agreeing on an interim Afghan government, and a temporary ceasefire were discussed.

Of course, diplomacy is often a struggle in minutiae and ego. Islamabad now accuses the U.S. of downplaying Pakistan’s importance in bringing the Taliban representatives to the table. Pakistan may also be angered by the Trump decision to suspend hundreds of millions of dollars in aid to Pakistan because it has not acted decisively against the Taliban in recent years. Pakistan is also concerned that a newly departed Afghanistan would leave a gaping vacuum that U.S. ally India would move to fill. The doves that circle this peace process are concerned that they may end up as canaries in coal mines.

And though the U.S. delegation approved further peace talks to occur in Saudi Arabia, the Taliban has stated that it will not approve the location. The Saudis had pushed to include the UN-backed Afghan government in the talks. Taliban representatives have pushed back and now openly state that they will go to Qatar for the talks.

A senior Taliban member was quoted, explaining the move. “Everyone is aware of the fact that the Afghan government wanted the U.S. and its allies not to leave Afghanistan, and we have paid a heavy price to expel all foreign forces from our country,” he said.

Though it was denied as a topic on the table in the talks, rumors still strongly persist that what is being discussed is a 2019 ceasefire in Afghanistan. If the Trump administration can end American involvement in both Syria and Afghanistan, it will be a foreign policy record that will be challenging to deny historically. That said, Democrats, neoconservatives, and major media outlets who profit mightily from war and conflict will find a way to darken the most silver linings.

It was Fidel Castro who made the famous “history will absolve me” speech. He understood that history as a tool can heal immediate rifts. There will be no moment of clarity with the mainstream mass media, the Democratic Party, or the never-Trump Republicans. This is a political war that exists until The Donald and Melania are helicoptered out of the Beltway.

But 20 years later, when columns of achievements are listed, many are going to be surprised that the Trump administration fared very well on the issue of peace. Then they will have to reconcile how the man they have painted as the most hated personality in the world was simultaneously the one who negotiated for peace. 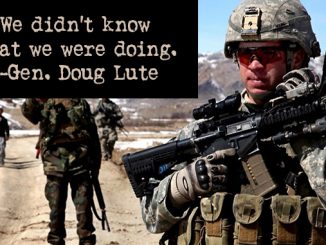 Crime of the Century: The Afghanistan War