Let me preface what I am about to say by disavowing all forms of racism and hatred. I am classified as “white” according to the simplistic ethnic-identity system that prevails in the United States, but the last I checked that wasn’t a crime, just a cause for guilt, hand-wringing, and hypocrisy.

I am pretty sure I’m not particularly racist. I spent many years living in mostly black neighborhoods in the San Francisco Bay Area and loved it. I was happy when a close high school friend married an African-American woman, not because she was black, but because she was gorgeous, friendly, and down-to-earth. My own wife is an American who immigrated from Morocco, and whose ancestry stems from much of Europe, Asia, and Africa. I have no personal interest in preserving the “purity” of any race. My race is the human race.

That said, I am not about to join the lynch mob hounding Rep. Steve King (R-Iowa) who represents a district about an hour’s drive from my house. The New York Times is hounding King over his “history of racist remarks.” House Republicans have obediently removed King from his committee assignments and may join Democrats in formally censuring him. Yet, by any sane measure, most of King’s supposedly racist statements are monumentally less offensive than what the whole U.S. government has been doing to black, brown, and yellow people since World War II: massacring them in ongoing military and CIA interventions that scholar and author William Blum has called “the American holocaust,” whose total number of victims is reliably estimated to be around 60 million, as tallied in a book by Noam Chomsky and Andre Vltchek titled On Western Terrorism.

Compared to the ongoing American holocaust of 60 million non-white people, the supposed speech crimes of King are pretty mild.

Consider the first “racist remark” on King’s Times rap sheet. King introduced a bill, stating, “That the U.S.A. is the unchallenged greatest nation in the world and that it has derived its strength from . . . Christianity, free-enterprise capitalism, and Western civilization.”

That statement may be banal. It may be parochial. It may overestimate “free-enterprise capitalism,” which has metastasized into today’s global neoliberal cancer. But racist?

The Times continues listing King’s speech crimes: “Mr. King is the chief sponsor of a law making English the official language of Iowa . . . (then) introduces the English Language Unity Act, a bill to make English the official language of the United States. . . . Mr. King sues the Iowa secretary of state for posting voting information on an official website in Spanish, Laotian, Bosnian, and Vietnamese.”

Okay, so the guy isn’t so good with foreign languages, like most Americans. But what does any of this have to do with racism? Aren’t the real racists those people who believe that today’s mostly non-white immigrants, unlike the mostly white immigrants of yesteryear, are too stupid to learn English?

Like President Donald Trump, King has made ill-informed remarks exaggerating the crime threat posed by illegal immigrants. Some of these statements could conceivably be called “racist” in that they unfairly and inaccurately denigrate an ethnic group, Hispanics, so I won’t defend those. But the majority of King’s supposed speech crimes are either positive statements about his own groups (whites, “Western civilization,” Americans) or reasonable expressions of concern about those groups’ demographic decline. The Times thinks King is a racist for saying: “Preventing babies being born is not medicine. That’s not constructive to our culture and our civilization. If we let our birthrate get down below the replacement rate, we’re a dying civilization.” That statement obviously is not racist. What’s more, it is largely accurate. So why is it such a problem?

By addressing the issue of the demographic decline of white Americans, and people of European ancestry in general, King is touching on realities that are currently unspeakable in mainstream discourse. But when America’s liberal gatekeepers clamp a tight lid on this subject, they simply increase the pressure inside the pressure cooker, increasing the likelihood of an eventual explosion.

When colonial France sent more than a million white French settlers into Algeria, the native Algerians understandably rebelled. The result was a horrific war.

When European Jews flooded into Palestine against the wishes of the Palestinian people, the Palestinians understandably rebelled. The result is endless regional war—a war that has taken more than 10 million lives and is far from over.

It is normal for people to defend their own ethnicity and its claim on territory occupied for generations. White Americans, scheduled for minority status by 2050, are increasingly unhappy with that prospect. And why shouldn’t they be?

This taboo topic calls for thoughtful conversation, not shaming and silencing. 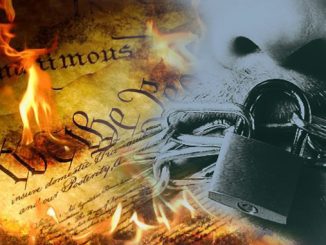