Before he left office, President Donald Trump moved the center of gravity of America’s threat preparedness up several notches to take account of the fact that China is not only America’s biggest economic competitor, but also is our biggest military adversary.

While China talks about building better relations with Washington, it is unlikely that will happen given the fact that the Biden administration appears to have accepted that President Trump got it right during the latter stages of his presidency in asserting that China’s imperial ambitions had to be curbed. It now seems clear that he understood this would not be achieved with tariffs alone or by way of his on-and-off-again relationship with Chinese president, Xi Jinping. A sign that President Trump understood the growing military risk posed by China’s strategic designs was his willingness in the waning days of his time in office to elevate the status of Taiwan as a U.S. ally and to assure it that America would keep it well armed.

What has been clear for years, but ignored by several U.S. administrations, is that China’s strategic aims have been to weaken American alliances in the Indo-Pacific region. Beijing has been expanding its military reach in an effort to show that it has the military capabilities of a superpower and the determination to control sea and air corridors across a wide expanse of Asia, especially in the South and East China seas, as well as deep into the Pacific and Indian oceans. Its aim is to prepare for a future when it will seek to challenge American naval and air power by closing off large parts of the Pacific to U.S. ships and aircraft. Part of this effort has included the building of advanced military capabilities on islands in the South China Sea to be used as platforms for mounting missile attacks on U.S. carriers and aircraft.

At the same time, China has been testing the military preparedness and capabilities of U.S. allies, including Australia, Japan, Vietnam, India, South Korea, and Taiwan. In particular, it has ordered increasing numbers of its aircraft to violate the airspace above Japan and Taiwan. Its navy has also regularly intruded in waters surrounding both countries while its fighter aircraft have flown dangerously close to U.S. and Japanese surveillance planes, and its naval vessels have harassed U.S. destroyers.

Meanwhile, India has complained about Chinese troops on its borders and Chinese naval craft in its waters. In essence, China’s imperial ambitions have put it dangerously at odds with its neighbors, many of them American allies. For President Trump, the military harassment of Taiwan signaled a real prospect that Beijing might launch an assault on the island, hoping America would be too frightened to come to its aid. For that reason, had he remained in the White House, he would have made the strengthening of military ties with Taiwan one of his goals to curb Chinese aggression. He has presented the Biden administration with an opportunity to do just that.

The fact is that China is not only our No. 1 military threat; it has been building its economy and its technological base off the backs of American innovators and others in the West. The Chinese have been stealing American intellectual property for decades. When people talk about America being hacked, no country has hacked us more than China’s army of hackers run by its Peoples Liberation Army. They have interfered in our electoral processes, even in this latest election, according to the director of national intelligence, and they have stolen every piece of technology they can get their hands on to build their advanced weapons, space programs, and artificial intelligence research facilities.

China has never been a true and honest competitor. It has been the cunning thief that has grown in power by cleverly pretending to be concerned with fairness, while its goal has always been to degrade America’s economic growth and military potential. It sees America as its enemy and it uses its desire to surpass America on the world stage to motivate its military.

President Biden, to the surprise of some, has made it clear that he plans to keep President Trump’s tariffs in place. It may well be that President Trump’s China policy has convinced the Biden administration that the only way to deal with Beijing is to take a tough line on all fronts, especially on trade, intellectual theft and Chinese imperial ambitions. The Chinese have, for too long, lulled Washington into believing that their desire for diplomacy is real when in fact they see Western inaction as weakness. If many experts watching recent events are right, the Biden White House will adopt the Trump policy of standing up to China by supporting and encouraging our allies to do likewise. Japan has argued for years that a united front of America and its allies is what China fears most. That view is now shared by India, China, Vietnam, and Australia. Each of those nations knows that Beijing would like to see a fractured Western alliance in Asia and the Indo-Pacific regions because it would allow China’s military to pick off smaller nations like Taiwan and Japan.

Like most of its allies, the U.S. has enough evidence that China aims to weaken the West economically. While the Biden administration talks of building an industrial base to revolutionize our infrastructure and sell materials like solar panels to the world, China has invested almost $2 trillion to beat America to it. Already, China makes more than 60% of the world’s solar panels. 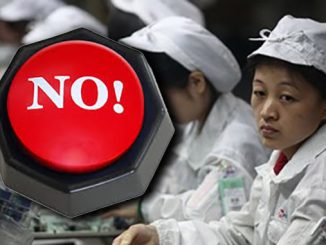 Reliance on China Against National Interests

2 Comments on China Remains No. 1 Threat