After nearly three years of negotiations, the UK’s Brexit from the EU has not happened, and some in the UK are not happy about it. The New Chartist Movement is advocating “a far better vision that transcends Brexit and aims for lasting reforms intended to bring people together and tackle specific problems.”

The long-awaited March 29 deadline for the UK to leave the European Union (EU) has come and gone. Unfortunately, the indecision surrounding the UK’s next steps has left the UK well within the EU’s clutches after nearly three years of negotiations between UK and EU officials about Britain’s anticipated exit.

Some dedicated British activists, however, are tired of what they describe as deceptive political theater out of Westminster, designed, they maintain, to ultimately disobey the will of the voters as expressed in the “Brexit” referendum back in June 2016.

Justin Walker, a longtime British Constitution Group member, military veteran, and activist, is well aware that Britain is still embedded in the EU’s regulatory network and entangled in the newly created EU-directed European Army. Outlining a constructive response to the Brexit folly, Walker told AFP that he’s helping to lead the New Chartist Movement to promote a far better vision that transcends Brexit and aims for lasting reforms intended to bring people together and tackle specific problems—while exposing the City of London’s monetary manipulation and other illicit operations of the power behind the throne.

In the wake of the UK House of Commons voting Friday, March 29 against Britain leaving the EU—the third time the legislative body has rejected Prime Minister Theresa May’s proposed “Brexit deal”—Walker called the Brexit debate and the UK government’s inability or unwillingness to finalize and implement it “all pantomime” and divisive “deep-state manipulation.” Walker’s outlook reflects the views of the more astute Brits who believe an acceptable exit is simply not in the cards, or that an exit simply won’t happen.

The original Chartists became a mass movement in 1836, which lasted about 12 years, with the goal of making government more transparent and accountable. But the mid-19th-century British state wanted no part of populist-style reforms and even resorted to armed force to quell some Chartist-based protests. Still, when Chartism’s original leader, Feargus O’Connor, died, over 40,000 people turned out for his funeral.

The New Chartist Movement (NCM) honors key Chartist traditions while enlarging the original mission. The core message Walker and his fellow NCM activists want to convey—as Britain’s chances of a successful, meaningful exit from the EU look increasingly unlikely—is contained in the NCM’s “Sovereign People’s Charter.” The Charter’s “Seven Requirements,” in a slightly abbreviated form, are as follows:

Full restoration of our ancient and proven “Common Law Trial by Jury and Annulment by Jury” Constitution that puts . . . the people, firmly back in authority over our agenda-driven and self-serving politicians, judges, lawyers, and bankers by lawfully removing from them their powers to punish and deceive.

The “Creation of Prosperity” . . . by bringing back debt-free and interest-free treasury money that’s based on the wealth and labor of our nation—exactly as we did in 1914 with the enormously successful Bradbury Pound.

The ending of abuse and harm of all children whilst protecting the Common Law rights of parents . . . to strengthen the family unit.

The assurance that we have the armed services needed to fully protect the sovereignty of our country . . . whilst also guaranteeing the operational resources needed for . . . community policing to keep our streets safe.

The exposure and removal of the hidden and alien system of “legalese” governance that controls our judges and court system whilst using outright fraud, deception, and entrapment to unlawfully impoverish and constrain the ordinary people.

The call for a new and democratic “Europe of Sovereign Countries” to replace the planned “European Union Superstate.” In other words, “a fresh European initiative” . . . free from the unelected and unaccountable European Commission and the privately run, debt-creating European Central Bank.

The guarantee that science is always used for the well-being and advancement of all and not for the profit . . . of the few. This includes the immediate termination of the . . . dangerous 5G rollout [i.e., high-intensity, next-generation mass communications infrastructure],” along with opposing “fracking, geo-engineering and compulsory vaccinations.”

As the New Chartists forge ahead and circulate their ideas, what Walker wants people on both sides of the Brexit debate to understand is that they’ve been deceived by a devious mass media and corrupt and negligent politicians, among others, who’ve falsely portrayed most Brexit supporters as potentially violent “rightwing racists.” 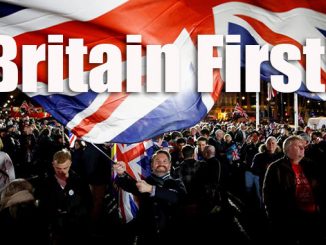 It May Have Taken Four Years, But Brexit Finally Happened