“Britain Firsters” are ready to move on after divorce from the EU.

Jan. 31 marked the long-awaited day that millions of UK citizens had been hoping for—the day that their country officially left the economic and political construct called the European Union (EU). This good news, however, was tempered somewhat by the reality that negotiations between the UK and the EU would have to continue.

It took four long years, but following the successful June 2016 Brexit referendum vote, UK and EU negotiators finally decided to “split the process in two.” There would be an immediate “divorce, and, following that divorce, they would negotiate the terms of their future relationship” during a transition period that “theoretically” ends Dec. 31, Mike Robinson of the independent “UK Column News” online told this AFP writer in a Feb. 3 interview.

“At this point we don’t know what we’re transitioning into because the negotiations haven’t begun,” said Robinson.

While the transition talks are expected to start in earnest on Feb. 20, the negotiations could easily extend beyond Dec. 31, 2020, and last “another two years,” Robinson soberly said.

He’s aware that Brexit, if handled properly in the months or years ahead, can indeed deliver what pro-Brexit voters expect.

“The divorce,” thus far, “is only on paper. As of Feb. 1, nothing changed in terms of farming rules or fishing rules, or trade rules or customs rules, travel rules, immigration rules—at this point nothing has changed and until the future relationship is agreed [upon], then nothing will change,” explained Robinson, who has thoroughly followed Brexit since its inception from his news studio in Plymouth, UK.

If no formal transition agreement is reached, the UK could still bust out of the EU at the end of the transition period and perhaps fall back on World Trade Organization trade rules as a default option, or backstop, despite whatever pain and confusion that may cause, Robinson went on to explain, providing a perspective largely denied to citizens of the UK and other nations who’ve been treated to the “chaos and noise” propagated by the mass media cartel.

Meanwhile, the rather secretive European Intervention Initiative (EII), partly founded by the UK in 2017—along with nine other European nations—presents some potential pitfalls for properly finalizing the Brexit transition because, while the EII is not an EU institution, it still allows the UK to assist the EU in establishing a European Defense Union. So, while it’s true, as some British political figures have stated, that there is no formal agreement that Britain is a part of that EU military union, Britain is helping build that union, nevertheless.

As noted by Robinson, EII documentation states that this organization, with the UK as a partner, “intends to contribute to the ongoing efforts within the European Union to deepen defense cooperation. . . .” This deepening of defense cooperation could have a negative effect on British sovereignty and therefore mitigate against the freedom and independence that UK voters sought when they approved the Brexit referendum in the first place.

For the time being, a major focus is a proposed new free-trade agreement between the two parties, Robinson said. How that works out, along with the nature and extent of the defense union arrangements, will significantly determine whether a truly sovereign Britain will emerge when all is said and done.

Few people can verbalize the spirit of Brexit better than longtime European Parliament Member Nigel Farage, the populist politician and colorful orator who some consider to be the “godfather” of the Brexit movement. In his Jan. 29 speech to that parliament he didn’t just celebrate the UK’s exit from the European Union; he also called for the eventual dissolution of the EU itself—just two days before the UK’s Brexit “divorce papers” to depart the EU reportedly became official.

While calling the EU “a 47-year political experiment that the British, frankly, have never been very happy with,” Farage recalled that British voters, in their 1973 referendum to join the European Economic Community (a prior stage of the budding EU), believed they had signed up to “a common market, not to a political union, not to flags, anthems, presidents—and now you even want your own army.”

Farage continued his remarks by saying that Jan. 31 “marks the point of no return. Once we’ve left, we are never coming back. And the rest, frankly, is detail,” referring to the date that became marked by celebrations across Britain, where the “Remainers” who had opposed Brexit licked their wounds and Brexiteers engaged in revelry.

Getting to the core of his address to a largely grim-faced European Parliament—save for his smiling British colleagues who sat near him—Farage said: “I want Brexit to start a debate across the rest of Europe. What do we want from Europe? If we want trade, friendship, cooperation, reciprocity, we don’t need a European Commission, we don’t need a European Court, we don’t need these institutions . . . and I can promise you, both in UKIP [UK Independence Party] and in the Brexit Party, we love Europe, we just hate the EU; it’s as simple as that.”

Farage, who is stepping down from the EU Parliament after 21 years of service—first as a UKIP member, and since 2019 as a Brexit Party leader—boldly declared that Brexit should be the start of something larger, leading to the EU’s dissolution: “I’m hoping this begins the end of this project; it’s a bad project. It isn’t just undemocratic; it’s antidemocratic . . . . It gives people power without accountability.”

From the globalists’ perspective, however, Britain’s departure “changes the balance within the EU and creates a power vacuum,” according to European Council on Foreign Relations Director Mark Leonard. “The absence of Britain will make the relationship between France and Germany even more toxic,” he said, suggesting Farage could be right when he says that Brexit could produce a domino effect.

Farage added that the real battle is not left versus right, nor conservative versus liberal, per se. More than anything else, it’s really internationalism versus nationalism. As Farage put it: “There is a historic battle going on now across the West—in Europe, America, and elsewhere—it is globalism against populism. And you may loath populism, but I’ll tell you a funny thing. It’s becoming very popular.”

By the time Farage finished reading the European Parliament the riot act, he had recalled the year 2005 when the French rejected the proposal to join the EU in a referendum.

“I saw it rejected by the Dutch in a referendum, and I saw you, in these [EU] institutions, ignore them,” Farage said.

The Irish, Farage added, also said “no” in a referendum to join the EU. “And [the Irish] were forced to vote again. You’re very good at making people vote again but what we’ve proved is the British are too big to bully, thank goodness.”

Populism’s “great benefits,” he summarized, are: “No more financial contributions, no more European Court of Justice, no more common fisheries policy, no more being talked down to, no more being bullied . . . I mean, what’s not to like? I know you’re gonna miss us, I know you wanna ban our national flags, but we’re gonna wave you goodbye and we look forward in the future to working with you as sovereign . . . .”

With that, Farage and his fellow Brits broke the parliament’s rules and waved miniature British flags in a forum where national flags are disallowed, despite the parliament consisting of members of Parliament from 28 nations, counting the United Kingdom. 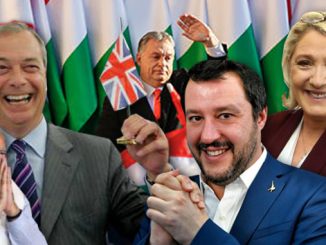 The Rise of the Nationalists