Some European powers believe NATO may need to be replaced with a new European Army given what is perceived as “crumbling relations with the Trump administration,” who argues the U.S. should not pay such a high price for the security of Europe. NATO’s demise could result in a massive realignment of power that could weaken both Europe and the U.S. militarily.

As relations between Washington and the European Union (EU) continue to deteriorate, it is conceivable that one of the casualties will be the North Atlantic Treaty Organization (NATO). It could be replaced by a new European Army led by Germany and France. Britain would not be part of the leadership of such a force, or perhaps might choose not to be involved, given that Brexit will hopefully soon end its links to the EU.

While some may say this is speculative, there is sufficient evidence that the NATO alliance is crumbling. Not for the first time, European members of the transatlantic alliance have to consider its demise and what will replace it. According to diplomatic sources in Europe who spoke to AFP on condition of anonymity, there have been discussions in the corridors of power in Brussels about crumbling relations with the Trump administration and the urgent need—with Britain leaving the EU—to contemplate a new European military force to replace NATO.

Since his election victory, President Donald Trump has consistently reproached Europe for making America pay the financial burden for sustaining NATO. He has suggested he has not been fully committed to NATO’s Article 5 that essentially commits every NATO member to defend any member who is attacked. But more importantly, perhaps, is the stark divergence of Washington foreign policy from that of the EU.

The latest example was the decision by 22 EU member states to publicly attack Trump for supporting Israel’s illegal occupation of the Golan Heights. The president essentially gave Israel a green light to claim ownership of the Golan. The EU also refused to back Trump and Israel’s campaign to destroy the international Iran nuclear deal and has taken a harder line with the Saudis over their slaughter of innocents in Yemen.

There are some in the NATO fold and in Washington who have feared these past two years that deep cracks in the alliance were widening as the EU and the Trump administration pursued different foreign policy goals and fought over funding. A British diplomat based in Brussels told AFP off-the-record that, in his words, “The writing has been on the wall for some time that NATO will not survive this Trump presidency.”

He added: “Some of us thought it fanciful when a suggestion came from Washington that NATO should include Israel in it ranks. It wasn’t the first time this subject was broached within NATO, but this time it was progressed by pro-Israel hawks close to the Trump White House who thought it might heal rifts, but it was designed to draw NATO into Israel’s Middle East strategy. It was dismissed as unworkable. Anyway, it would never have passed muster with Europeans.”

Interestingly, Israel would be unhappy to see the end of NATO, according to Daniel Shapiro, a former U.S. ambassador to Israel, writing in Ha’aretz. He has argued that such a move would empower Russia, especially in the Middle East, and that Israelis should encourage Israeli Prime Minister Benjamin Netanyahu to prevail upon Trump to stay in the alliance.

Meanwhile, in Europe there has been much confused thinking about NATO with German Chancellor Angela Merkel and French President Emmanuel Macron suggesting the creation of a European quick reaction force to complement the alliance. Trump, however, has angrily dismissed it as “insulting.”

NATO top brass have been trying to damp down any talk of a European quick response force, or a European Army, even though 22 states could put over 1 million soldiers in the field. There are, however, factors outside NATO’s control. Aside from serious and ever-growing foreign policy disputes between the EU and Washington, there is always the possibility of a tariff war over cars and other products that would shred relations between Washington and one of the world’s biggest economic blocs.

Some senators have been putting together legislation aimed at preventing Trump from ending NATO membership without congressional approval, but it remains to be seen if they have majority approval in the Senate. In contrast, the president believes that he has the authority to make such a move. He may be right. All it would require for him to end a formal treaty like the one with NATO is an executive order.

After 70 years of NATO, it is difficult to calculate the outcome of its demise. By any measure, it could result in a massive realignment of power that could weaken both Europe and the U.S. militarily. It could mean that any future U.S. conflicts across the globe would be denied European support, and the bases needed to reach many parts of the world. Europe likewise would have to go it alone and deal with its own security. While it is not clear if the American public as a whole would support leaving the alliance, it is no longer a subject that can be pushed under the rug. 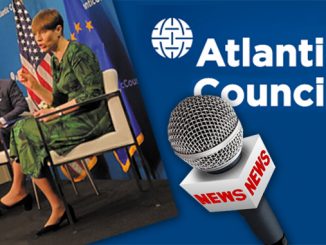 3 Comments on Rift Has Never Been Wider Between the U.S. and EU