“I do agree that after a meeting people should go out . . . like me, and tell you, what we discussed.”

That’s much of what Dutch parliament member and 2014 Bilderberg Meeting attendee Diederik Maarten Samsom had to say when, on Friday, May 30, he departed the tightly guarded confines of the Bilderberg summit during its second day and briefly spoke to press and protesters.

As the urbane Mr. Samsom peered through the double-layered steel fencing that police placed around the “free-speech” zone, he talked about the pros and cons of fracking (the underground process used to extract crude oil and natural gas from rock formations, which contaminates large amounts of the groundwater needed for the process).

He also seemed to say he agrees with the protesters, to some extent, on the need to reduce genetically modified organisms (GMO), although he remarked that there are a number of issues over which he’d disagree with Bilderberg critics.

And, seemingly true to his word, by Day 3 of Bilderberg on May 31, Samsom did indeed return to the protest site. This time, however, he went inside the protest zone and explained Bilderberg, of sorts.

It’s unclear as of this writing whether he was permitted to do this, or did it on his own.

At any rate, this striking development of a Bilderberg attendee leaving the meeting to talk to a critical audience was seen by several of the protestors as more of a ploy than a sudden fit of truth-telling.

Some suspected that Samsom may have used it as a distraction while important Bilderberg members arrived or departed.

By around 2 p.m. on June 1, the 62nd Bilderberg Meeting in 60 years came to an end. Some years ago the Bilderberg attendees gave up their Monday breakfast before their departure and started leaving on Sundays. This past Sunday’s departure may be their earliest ever.

Loud declarations by about 50 remaining protesters—some via bullhorn—were hurled at Bilderberg members as they departed the Copenhagen Marriott Hotel. (Sunday was Day 4 of Bilderberg, counting their arrival day on May 29).

A 10 a.m. request on June 1 by this reporter—seeking a press release, an updated attendance list or possibly even a live press conference—was, by all indications, ignored as the day wore on and the Bilderbergers departed.

Also, the Marriott’s management declined to admit this newspaper into the hotel on Sunday evening, claiming they would not allow the public back inside until at least noon on Monday, June 2. Stay tuned on that one.

Bilderberg 2014 wound up with many wondering what the future holds.

On the one hand, the “Euro-skeptic” elections which seated nationalists and populists of various stripes—an historic development which poses a challenge to the European Union that the Bilderbergers helped create—means that the political and economic infrastructure that Bilderberg fostered for decades, and still religiously upholds, may be in trouble.

But the anti-EU party members that want to re-adopt national sovereignty, and forsake the EU’s central ruling regime in Brussels, still aren’t drawing the connection between the European central rule they dislike and the Bilderbergers who were instrumental in constructing that central rule.

But outside Copenhagen’s Marriott Hotel, the anti-Bilderberg protesters—who were herded into a double-fenced parking lot strewn with hard stones and dusty conditions during frequent high winds—covered a lot of ground through various speeches to expound on why Bilderberg is the cause of many of Europe’s, and the world’s, troubles.

Mark Anderson Interviewed by Dan Dicks of Press For Truth

As this reporter observed the activists on June 1 and prepared to write this Day-4 overview of Bilderberg 2014, a protester could be heard saying: “And what you’re telling us is that we need to pay for these meetings, too?”

The protester made that exclamation through his bullhorn while standing along the curb, directly across the wide street from the Marriott Hotel.

That remark—and other passionate statements against the “new world order” which the Bilderbergers have been laboring to build for over half a century—were made right after Christine Lagarde, the head of the International Monetary Fund, was photographed leaving the hotel. 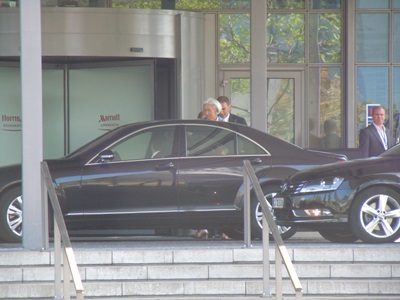 She said that a TV-2 local news piece reported that the Danish people would like to know what kind of police costs and other tax-related costs are being imposed on the Danish public to protect a hyper-private group whose members bring their own private security and should rely only on that.

There’s a growing consensus that the public police should not spend tax dollars to act if they are personally protecting such ultra-wealthy meeting attendees. Instead, police should limit their actions to traffic control and other basics, and also avoid taking money from Bilderberg, since that could be seen as purchasing police influence.

In return, this reporter shared with Ms. Nielsen a copy of the recent front-page AMERICAN FREE PRESS story, “Bilderberg Probed,” to drive home the point that AFP is continuing its own probe into tax dollars going into any aspect of Bilderberg.

AFP is doing this to lay the groundwork for showing that the Bilderberg meetings are ill-conceived and abuse the public trust in a manner that can and should be challenged through proper channels.

This “Bilderberg Probe” also was highlighted in a number of news and documentary interviews that this reporter was asked to give.

The interviews provided a chance to point out that intelligence leaks could happen at the Bilderberg Meetings, where various government officials, military and intelligence officials and corporate captains from several nations collude. It’s clear that sensitive information may exchange hands—since, by the Bilderbergers’ own admission, they keep no minutes. Nor is any other kind of official record kept regarding what is said and done at their meetings.

Although the Danish police enforced strict limits on how close the press and protesters could get to the hotel, which presented photographic problems, neoconservative, pro-Zionist policy architect and Bilderberg veteran Richard Perle also was spotted leaving this year’s meeting on June 1. 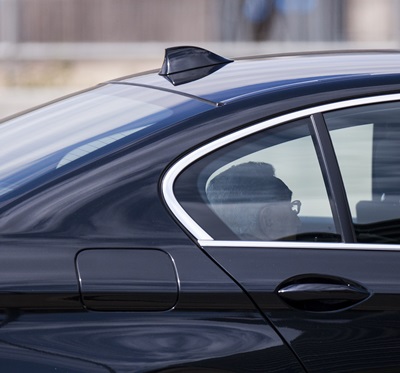 Furthermore, former U.S. Secretary of State Henry Kissinger, one of the oldest-living Bilderberg members, was photographed entering the meeting a couple days before.

The confirmed sightings of Lagarde, Perle, Kissinger, Davignon and other noted Bilderberg attendees put to rest strange claims made by a couple of protesters that the Bilderbergers pulled off a scam and actually met somewhere else this year.

Over the last three to four years, there has been speculation that the Bilderbergers—given the increasing media coverage of their confabs over the years—might set up a dummy meeting in one place and meet in another.

In an effort to double-check the situation, a reliable AFP contact from Switzerland on May 29 (Day 1 of Bilderberg 2014) took a train to Marienlyst, Denmark—the site of the last Bilderberg meeting in Denmark, in 1969—to see if any Bilderbergers were secretly returning to that location. The contact reported back a day or two later, telling this reporter that the old hotel there was vacant and undergoing renovation.

It’s technologically possible for Bilderberg to break their summit into subcommittees who could connect with each other through video-conferencing from various locations. But just because something is possible doesn’t mean it’s literally being done.

And the confirmed sightings of key elites show that the Bilderberg group is refusing to stop its illicit and collusive sessions involving about 140 of the most influential figures in politics, big media, big oil, central banks, royalty, foreign-policy think tanks, academia, and leading corporations.

And all this happened against the backdrop of a European mainstream media that, in the opinion of several observers, is dropping the ball on its usual heavy coverage of Bilderberg.

This reporter’s predecessor in covering the Bilderberg Meetings, the late James P. Tucker, Jr., for decades tailed the Bilderbergers and, in the process, encouraged the European media to pay closer attention to Bilderberg. He hoped the intensified European coverage would break the U.S. media blackout of Bilderberg, which, except for occasional slips, is still largely the case in America to this day.

That important European media interest, in terms of sheer quantity, apparently peaked last year during the Bilderberg summit in Watford, England—even though a lot of the coverage needlessly lampooned protesters instead of prying into the Bilderberg gathering.

Last year’s event did include a Bilderberg festival that attracted some 2,500 people on the far edge of The Grove hotel’s grounds. That helped keep media interest high.

Protesters this year—while dealing with a free-speech zone that lacked the soft grass, tents and other comforts evident last year—numbered perhaps 75 on Day 1 of Bilderberg. But with May 30 having been a national holiday, the numbers swelled to about 200 on that day but tapered off a little on May 31 and June 1.

Despite less European mainstream media coverage and the challenging physical conditions, the protesters and citizen journalists kept their spirits high and gave speeches, while frequently using a bullhorn to blast the nearby meeting with pronouncements against the Bilderberg group’s global consensus-building, broad-based planning and insider deal-making—against the very grain of the democratic process, and in pursuit of monopoly capitalism and a one-world system riddled with heavy surveillance and the possible death of freedom.

This reporter was given a chance to speak to the protesters and other journalists on May 31, in order to strongly stress that the creation of money with interest by private central banks is the central component of Bilderberg power.

Key central bankers who attend Bilderberg most years include Federal Reserve Chairmen, as well as high officials with the European Central Bank.

Indeed, closing the book on Bilderberg and ending this group’s meetings and influence must remain the true purpose for reporting on, protesting and exposing Bilderberg, as this reporter and others argued.

Stay tuned for more on this website and in the pages of AFP for insights into Bilderberg’s current agenda and more on who attended in 2014.

Other highlights to note in this summary of Bilderberg 2014 are:

Mark Anderson is roving editor for AMERICAN FREE PRESS. He will be in Denmark this year to cover the Bilderberg Meeting. Call 202-544-5977,  Monday through Thursday, 9 a.m. to 4 p.m. ET, to see how you can help.