COPENHAGEN, Denmark— As Day 1 of Bilderberg 2014 subsided and Day 2 came along, things got rather interesting—involving an Italian parliament member and a Danish editor.

Consider this: our illustrious members of Congress in Washington, D.C. may want to borrow a page from that Italian Parliament member, Carlo Sibilia.

He arrived later on Day 1, May 29, outside the 2014 Bilderberg meeting to present a written proposal to the insulated Bilderberg members huddled inside the Marriott Hotel in Copenhagen, Denmark. 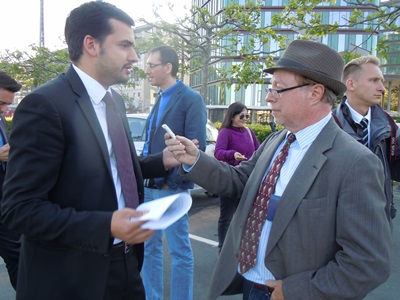 Sibilia also noted that he has asked to be allowed inside the Bilderberg Meetings, this year and in prior years. But he’s been turned away every time.

The above-noted proposal was brought from Rome to Copenhagen by Sibilia and several fellow Italian legislators. They’re calling on Bilderberg to no longer allow elected officials into the highly secretive meetings.

Sibilia also is stressing that even those government officials from any nation who simply hold appointed positions should not be accepted by the Bilderberg Group.

That’s because appointed officials have to answer to elected officials. Furthermore, Sibilia insists that anyone with any degree of public trust, whatsoever, should be barred from this global planning summit.

He believes this move would boost Bilderberg’s transparency. But Sibilia also feels barring those who are supposed to uphold the public trust from attending these collusive meetings would deflate the back-room influence of the meetings.

While Sibilia stopped short of explicitly saying whether such a change could lead to the end of the Bilderberg Meetings, this writer called for the end of the meetings during about 10 video interviews for various independent news outlets and videographers—stressing, for instance, the liability of U.S. officials from intelligence and military agencies, or legislators who are privy to sensitive matters, purposely or inadvertently divulging such information to foreign intelligence or government officials who attend Bilderberg.

Sibilia feels his proposal is the least Bilderberg members can do to come clean about their mysterious meetings, which are in their 60th year for the stealth advancement of unaccountable global government—controlled by the super-rich at the expense of accountable national government and of the vast majority of humankind.

Former senator and current United States Secretary of State John Kerry certainly could draw a lesson from this development. As a sitting U.S. senator from Massachusetts, he attended the 2012 Bilderberg Meeting in Virginia. As Secretary of State, he also slipped into the Trilateral Commission plenary meeting in late-April 2014, inside sources say, to speak about containing Russia and other matters high on the Bilderberg-Trilateral agendas.

Russia, with its new Eurasian Union announced during Bilderberg 2014, represents a distinct obstacle to North Atlantic Treaty Organization-European Union eastward expansion, with such expansion being sought by Bilderberg, the “Trilaterals” and the Atlantic Council. This newspaper’s Bilderberg coverage has been globally unique in fully exploring and exposing the larger picture involving not only Bilderberg—but also Bilderberg’s connections to these other globalist groups.

Sibilia also says that influential Italian politicians have risen through the ranks apparently due to their Bilderberg attendance. So it’s fair to ask: Is that, in any way, how Senator Kerry became Secretary of State?

Kerry announced early on May 29, 2014 that former National Security Agency contractor Edward Snowden gets no clemency from the U.S. if he returns home, since he is accused of leaking touchy U.S. secrets and spying for Russia.

Maybe it’s Kerry who should come clean about his Bilderberg and Trilateral attendance and explain what sensitive U.S. matters could potentially be divulged to foreign powerbrokers at the secretive gatherings of these well-connected groups.

Yet if Sibila’s proposal is ever heeded, then elected and appointed public officials could be subtracted from the Bilderberg equation and all related risks could be abated. That could seriously deflate the power of the Bilderberg Group itself.

In another noted development, this one on May 30, or Day 2, this reporter contacted the office of Bo Lidegaard, executive editor of Politiken, perhaps the leading Danish newspaper.

He’s on the 60-member executive committee of the Trilateral Commission (TC) and the only media member on that committee. The TC, which has over 400 members in all, was founded in 1973 by longtime Bilderberger David Rockefeller.

Lidegaard’s secretary stopped short of saying whether he attended Bilderberg 2014 as of May 30, but a reliable source said Lidegaard’s predecessor at Politiken, Mr. Toger Seidenfaten, was with Bilderberg for many years.

So Lidegaard’s absence from his office on May 30 and his TC connection suggest he’s likely been invited to meet with Bilderberg this year. He’ll be contacted again, soon.

Politiken’s Bilderberg coverage did feature a respectable online article right after Day 1, but the more widely-read hard copy version of the broadsheet newspaper did not carry a word about Bilderberg after the first day.

Mark Anderson is roving editor for AMERICAN FREE PRESS. He will be in Denmark this year to cover the Bilderberg Meeting. Call 202-544-5977,  Monday through Thursday, 9 a.m. to 4 p.m. ET, to see how you can help.