• Bilderberg no longer concealing meeting spot; Denmark suspected as next stop on their shadowy world tour.

This year, the organizers of the Bilderberg meetings have revealed in advance the name of the nation in which their highly exclusive conference will take place.

According to no less than the group’s official website, “the 62nd Bilderberg meeting will take place at the end of May 2014 in Denmark.” This announcement reflects a dramatic change from the previous Bilderberg modus operandi whereby the locations of their meetings had to be discerned through sources and investigative research.

“Every year, between 120-150 political leaders and experts from industry, finance, academia and the media are invited to take part in the conference. About two thirds of the participants come from Europe and the rest from North America; one third from politics and government and the rest from other fields,” is how Bilderberg itself tamely describes its gatherings. The meetings are always held at the most high-dollar hotels and resorts—almost always those which sport a golf course.

The Trilateral Commission (TC), a close cousin of Bilderberg, will meet April 25-27 in Washington, D.C., as AMERICAN FREE PRESS just reported in a front-page exclusive in the March 31 issue. That group—founded in 1973 to globalize the economy and government by way of North America, Europe and Japan—has its major annual meeting and regional gatherings to set the tone for the more exclusive Bilderberg meetings.

Both gatherings involve select media attendees who participate but strike a deal to not report a word about their respective agendas. European media are much more open to reporting on Bilderberg compared to the near-total news blackout in the United States although some European and United Kingdom reports chastise Bilderberg protestors and treat the powerful group itself as a mere curiosity. 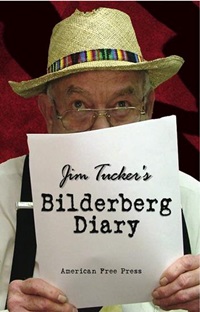 Only Jim Tucker could pull back the veil of secrecy from the Bilderberg Group and only AFP has the courage to publish this volume.

Now, in the pages of Jim Tucker’s Bilderberg Diary, Jim Tucker lays out, for the first time, his entire remarkable history of covering Bilderberg (and its Trilateral and CFR allies), literally infiltrating Bilderberg meetings, procuring their private documents, and working relentlessly to shine the spotlight of public scrutiny on Bilderberg’s affairs.

Tucker’s prose, first-hand, folksy and colorful, will introduce you to the little-known arena of the Bilderberg elite.  This volume is a memorable and panoramic journey that will lay bare the realities behind modern-day international power politics in a way that you’ve never seen before. And the book includes several representative lists of Bilderberg membership over the past several years, more than 80 fascinating on-the-spot photographs of the Bilderbergers in action and photo reproductions of actual Bilderberg documents secured by Tucker.

Plus a fascinating Afterword by Willis A. Carto, the man who first suggested Tucker cover Bilderberg for The Spotlight newspaper, realizing what was happening behind closed doors at Bilderberg meetings was far more important, and sinister, than Bilderberg press releases were admitting.

If you’ve ever heard the mass media claim that concerns about Bilderberg are “just some crazy conspiracy theory,” you’ll definitely think otherwise as you travel with Jim Tucker into the world of Bilderberg.

AFP’s files and Bilderberg’s own postings show that 2014 will be the third time this conference of the rich and powerful in government, big business and media has taken place in Denmark. The Bilderberg meetings started in Holland at the Hotel de Bilderberg, which became the namesake for a shadowy group whose very existence was denied for decades.

But then along came Liberty Lobby founder Willis Carto and “Bilderberg Hound” James P. “Jim” Tucker, Jr. They built on the work of early pioneer Westbrook Pegler and brought forth a slow-but-steady escalation of news coverage that eventually overcame Bilderberg’s veil of secrecy. This constant pressure and inquiry finally led to this year’s advance announcement by the group of where its next conference will be held.

This writer, having worked with the late Tucker at Bilderberg meetings from 2010 through 2012, had briefly suspected the “Bilderbergers” would return to Holland this year to mark the 60th year since their meetings began. A nearby northern European location was next on the list of suspected meeting places. And, sure enough, that appears to be the case.

In May 1969, the Bilderbergers met in Marienlyst, Denmark. The only other documented Denmark meeting happened when the group was young—in May 1956 in Fredensborg. The 1969 meeting included just two admitted topics: “Elements of instability in Western society,” along with a look at “conflicting attitudes within the Western world toward relations with the U.S.S.R. and other Communist states of Eastern Europe.”

At the 1956 meeting, the Bilderbergers considered the causes of growth of anti-Western nations within the United Nations, along with “a common approach by the Western world toward China and the emergent nations of South and East Asia.” And among other things that year, the Bilderbergers discussed “How the West can best meet Asian requirements in the technical and economic fields.”

So, even that long ago, the Bilderbergers apparently worked well in advance on what became normalized relations with China.

That led to the free-trade racket that siphoned industrial might out of the U.S. and re-zoned the globe to make China an industrial powerhouse and America a second-class retail and hospitality economy. This caused huge trade deficits when the U.S. imported more than it exported and cash-strapped Americans succumbed to buying shoddy Chinese merchandise.

This overall setup greatly intensified and advanced the globalizing agenda of Bilderberg, the Trilaterals and related groups.

According to a Czech source, there are tentative indications that this year’s Bilderberg Meeting will take place at the Marriot Hotel in downtown Copenhagen, the capital of Denmark. While this writer found the hotel is booked in late May and early June when the Bilderbergers say they’ll meet, the hotel’s location is along the Inderhavnen Canal, which is a major waterway with constant tourist- and commercial-boat traffic. That would seem to infringe upon the super-privacy and security the Bilderbergers crave.