• Truth is, many supplement manufacturers are more interested in profits than providing you the products and information you need.

So-called health experts often confuse the public, possibly by accident, but most likely on purpose. You know how it is. One day you see a headline that tells you some new food or fad diet is the best thing since sliced bread. And then, a week later, a new headline pops up claiming what you read last week is completely wrong and could shorten your life expectancy. The problem is, most Americans simply don’t have the time or expertise to do the exhaustive research on specific health topics to find out what the truth really is. Thus the general public is often swayed by the last sensational mainstream health news they read or hear about.

We in the alternative health field cringe when the mainstream media starts to hype a new health product. For instance, beta carotene was once heralded as a miracle cure, especially to help prevent a variety of ravenous cancers. A happy public gobbled this new beta carotene by the bottle. But honest and far-sighted health researchers took pause because the miracle cure touted was a synthetic, petroleum-based product, pushed by a major pharmaceutical company, which was, no doubt, behind the hype. There were other problems with this new “miracle cure,” one of them being that it was isolated from other key carotenoids.

Finally the truth emerged, and negative headlines killed beta carotene as a supplement. Many people were left completely confused.

There are more than 600 carotenoids in nature, and six are known to be common in the diet of North Americans. They are alpha carotene, beta carotene, beta-cryptoxanthin, lutein, zeaxanthin and lycopene. Carotenoids are yellow, orange and red pigments synthesized by plants. You see them in tomatoes, carrots, peppers and other brightly colored vegetables.

Even though there is twice the amount of beta carotene as there is alpha carotene in many health-giving foods—such as carrots and palm oil—alpha carotene may have more biological activity than beta carotene. However, there likely is a synergistic effect received when ingesting a variety of carotenoids together.

Alpha carotene caught the interest of Scientific American contributing editor Katherine Harmon Courage, who wrote: “A large U.S. study has found that adults with higher concentrations of serum alpha carotene in their blood were likely to live longer than those who had lower levels. . . . The team found an especially strong correlation between higher alpha carotene levels and lower risk of death from diabetes, upper respiratory tract and upper digestive tract cancers, as well as lower respiratory disease.”

Ms. Courage further noted: “Alpha carotene is not often found in multivitamins or other common dietary supplements, which suggests that most of the quantities found in people’s blood come from food (primarily yellow, orange and dark green vegetables, including broccoli, carrots, collards, green beans, lettuce, peas, pumpkin, spinach, sweet potatoes and winter squash). And a previous case control study found that eating more of these sorts of alpha-carotene-rich veggies led to a decreased risk of lung cancer.”

So there you have it. Careful study reveals that carotenoids may in fact be a natural miracle for some people after all.

But were you to listen to the mainstream medical establishment, you’d either be taking synthetic beta carotene or ignoring alpha and beta carotene completely. Either way, you wouldn’t be doing your body much good—and possibly some harm.

Research has shown that Americans need carotenoids and tocotrienols but are not getting enough—woefully not enough. Moreover, many products on the market are either synthetic or GMO based and lacking in the components necessary to get the most out of your supplements. But Carotec offers the highest quality non-GMO, all-natural supplements. This includes Red Palm Oil Concentrate, which studies have shown delivers the most bio-available alpha carotene, beta carotene and tocotrieols (Vitamin E complexes) to help the health of your eyes and vision, brain, heart, immune system, skin, growth and development.

Red Palm Oil was noted as the “best superfood” by the well-known Dr. Oz. However, many tried to eat Red Palm Oil and the taste was awful, assuming it was actually Red Palm Oil and not a counterfeit. Now, Carotec brings you the benefits of non-GMO Red Palm Oil in an easy to take soft gel.

Just one per day is recommended! 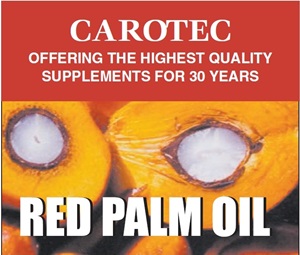