Vaccines previously approved for emergency use have now been tied to life-threatening anaphylactic response, systemic inflammation, excess mortality and even morbidity among vaccine recipients

The United States has hit a grim milestone: It has been one year since the first confirmed case of SARS-CoV-2 was diagnosed in the country. For many it is hard to believe that a full year has passed since we became plagued by social distancing, mandated facial coverings, and sky-high unemployment. Perhaps even more difficult to fathom is that there are vaccine candidates already being administered. British naval historian and prolific writer C. Northcote Parkinson once held, “Delay is the deadliest form of denial.” Certainly, delay cannot be cited regarding the clinical study, production, and injection of Covid-19 vaccines, as emergency use authorization expedited the process to a speed quite literally never before seen, but the scientific community’s downright denial that the shots are increasingly being associated with dangerous side effects has already proven deadly.

As the Covid-19 vaccine rollout comes into focus, Big Media and Bigger Pharma are working overtime to diminish and silence coverage of the severe allergic reactions, massive heart attacks, and increasing deaths attributed to the vaccine. As the number of doses administered increases, so do the number of reports of otherwise healthy individuals experiencing a litany of health complications beginning immediately after their first round of shots.

More than 44 million doses of the Pfizer-BioNTech and Moderna Covid-19 vaccines have been injected into the arms of patients worldwide. Israel is leading the world in administering shots; nearly 15% of the country’s 9.3 million citizens have received the inoculation within the past two weeks. President Joe Biden promises to have 100 million doses administered in his first 100 days in office, and already many in the U.S. received the first jab and are set to receive their second dose in the coming days.

Local and national news outlets are reporting, generally, that vaccine availability is exciting news, as it will help us “round the turn” and bring some sense of normalcy back to our lives. Unfortunately, for the thousands of vaccine recipients who have had life-threating, and even life-ending, reactions to the shot, the silver lining is more an ominous shade of dark grey.

In the United States, the Vaccine Adverse Event Reporting System (VAERS) is the federal government’s “national early warning system to detect possible safety problems in U.S.-licensed vaccines.” Established in the 1990s and co-managed by the Center for Disease Control and Prevention (CDC) and the Food and Drug Administration (FDA), VAERS is a passive reporting platform where both licensed medical professionals and laypersons can report adverse reactions to a received vaccine. Healthcare professionals are required by law to notify VAERS of an adverse reaction, but as a passive reporting system “it relies on individuals to send in reports of their experiences,” without any real oversight or enforcement. A 2010 report by the Agency for Healthcare Research and Quality, part of the Department of Health and Human Services, estimated that between December 2007 and September 2010, only 1% of adverse effects were reported through the program.

Keeping in mind that VAERS notoriously underrepresents adverse effects, the CDC has stated that 4,393 total adverse events to Covid vaccination were reported, including 13 deaths between Dec. 14-23, 2020. These numbers do not include any reported reactions since the beginning of January 2021, nor do they include any data from the state of New York (which has not reported to VAERS) or international vaccine recipients. Additionally, the report focuses primarily on the Pfizer-BioNtech vaccine, as the Moderna shot was not approved until December 21.

After cherry-picking the numbers, the CDC released a deceptively conservative analysis that puts the rate of severe anaphylactic response to the Covid-19 shot at 10 times higher than similar reactions to the flu shot. The CDC has not yet released official numbers on deaths caused by the vaccine as the parameters for reporting require any adverse effect to take place on the day the shot was administered. This caveat in reporting will likely continue to skew the numbers, possibly giving the CDC grounds to deny any link or causation with the vaccine. It should be noted that some in the medical community have argued that even with anaphylactic reactions being prevalent, the potential risks from the shot are still outweighed by the perceived benefit, as Covid-19 is now being blamed for 2,000 deaths every day in the U.S.

At the onset of vaccine distribution, the CDC created a self-reporting smartphone app called v-safe. Similar in concept to VAERS but more accessible for many users, v-safe asks patients to report any side effect experienced after receiving one of the approved vaccines. Children’s Health Defense, the organization chaired by Robert F. Kennedy Jr., reported, “On Dec. 19, v-safe tallies for the first five days of Covid-19 vaccination showed that among 215,362 vaccine recipients registered with v-safe, 5,052 individuals self-reported serious ‘health impact events’ following their first dose of vaccine—events requiring care from a fellow health professional and rendering the person unable to work or perform normal daily activities.” The report explains, “This, too, is concerning, translating into a one-in-43 injury rate (2.3%) for the v-safe group.” These self-reported numbers alone should be a red flag, but as media, pharma, and public perception become more entrenched and entangled, no such flags are flying.

As previously approved vaccines are being ramped up for distribution and additional vaccines by Johnson & Johnson and AstraZeneca are nearing emergency use authorization, one thing should be made clear—we still do not know if any of these vaccines will prevent infection or transmission of the disease. Even the manufacturers of these vaccines will only confirm that the shots “mitigate” symptomatic responses to contracting the virus.

As more and more cases of lethal or near-lethal reactions to these rushed vaccines emerge, we must conduct our own due diligence to educate ourselves about what is right for our lives and our families. Whether Covid-19 vaccines will be a panacea—or a biological weapon of mass destruction—remains to be seen. 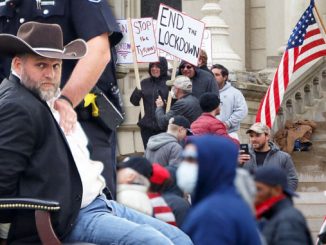