President Donald Trump’s recent reported positive testing for Covid-19 and subsequent hospitalization spawned numerous conspiracy theories. Even the likes of pro-Trump Tucker Carlson remarked on the suspicious nature of the timing—just a month before the election. Was this a plot to incapacitate the president and remove him from office? Was he really poisoned, in an attempt to assassinate him? Did he really even have it? Was it a ploy on his part to gain sympathy with the public? 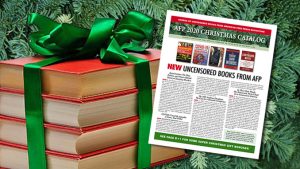 When President Trump quickly recovered, with seemingly no ill effects, the theorizing began to diminish. The president’s many enemies were quick to blame his supposed failure to take the virus seriously for his positive testing and became apoplectic over his ride around the hospital in a limo to wave at his supporters and subsequent removal of his mask outside the White House before he attempted to reassure Americans by declaring, “Don’t be afraid of Covid. Don’t let it dominate your life.” In response to Trump’s rational and uplifting comments, Harald Schmidt, assistant professor of medical ethics and health policy at the University of Pennsylvania, exclaimed, “I am struggling for words—this is crazy. It is just utterly irresponsible.” Dr. William Schaffner, an infectious disease specialist at Vanderbilt University Medical School, called the president’s message “dangerous” and predicted, “It will lead to more casual behavior, which will lead to more transmission of the virus, which will lead to more illness, and more illness will lead to more deaths.”

President Trump had mocked Joe Biden during the first presidential debate. “I don’t wear masks like him. Every time you see him, he’s got a mask. He could be speaking 200 feet away from them, and he shows up with the biggest mask I’ve ever seen.” Many were surprised that the president didn’t take the drug hydroxychloroquine, which he had previously touted, and has been curiously demonized by the entire establishment. Instead, he was treated with Regeneron, a drug long lauded by Dr. Anthony Fauci, who has been the point man for the authoritarian response to the virus. It has been revealed that the president himself has ties to Regeneron’s billionaire CEO Dr. Leonard Schleifer. Schleifer’s company received $450 million in government funds earlier this year as part of the administration’s Operation Warp Speed plan to develop a Covid-19 vaccine. Trump also owns shares of Regeneron, and his glowing public endorsement of the “miracle” drug sent its stock prices soaring. Many of those who have been critical of the draconian lockdown measures were disappointed that President Trump didn’t take the opportunity to point out how insignificant the virus is in relation to the heavy-handed measures enacted to supposedly combat it. The survival rate for Covid-19 is over 99%, and that is using the very dubious official numbers produced by the Centers for Disease Control.

In 2014, President Barack Obama advised Americans not to “give in to hysteria or fear” about the far more dangerous Ebola virus. The Texas state health commissioner said at the time, “Fear of this could be more damaging to this community than the virus itself.” President Obama was widely praised by the same mainstream media that is triggered by everything Donald Trump says, for making essentially the same remarks. Then private citizen Trump would criticize a doctor who treated Ebola patients in Guinea and was allowed by the Obama administration to reenter the country. The unashamed doctor reacted by saying, “We all lose when we allow irrational fear, fueled in part by prime-time ratings and political expediency, to supersede pragmatic public health preparedness.”

Trump’s many celebrity critics reacted predictably to his contracting the coronavirus. “I have been wondering why he doesn’t get Covid—with all his Hitler-like mass free gatherings. Whoop, dare it is,” gloated Rosie O’Donnell. Ice T tweeted, “Can I say karma’s a bitch.” Deluded actress Mandy Moore virtue signaled on Twitter, “Don’t be afraid of Covid? Tell that to the 210,000 families who have lost loved ones. To the black, brown, and indigenous folks disproportionately affected. . . . You’re the cruelest.” Bette Midler called Trump “the sick Idiot-in-Chief,” and Tom Hanks’s son Colin echoed this by referring to the president as “idiot super spreader.” Filmmaker Michael Moore was perhaps the nastiest, tweeting out, “My thoughts and prayers are with Covid-19.”

Whatever else might have been behind the situation, Trump’s brief bout with the virus exposed the irrational hatred so many in the country feel for him. Enough people were wishing online for his death that even Twitter had to place a mass ban on such expressions. Attempting to calm the public and advise them not to overtly fear what is essentially a strain of the common cold should not be a subject of intense controversy. One can only shudder at the prospect of these “woke” authoritarians attaining more power.