Dave Gahary speaks with prolific conspiracy researcher and writer Victor Thorn about his latest book, CROWNING CLINTON: Why Hillary Shouldn’t Be in the White House, in this informative interview (16:30).

and this time he picks up where he left off with his groundbreaking Hillary (and Bill) trilogy.

In Crowning Clinton, Thorn provides groundbreaking information that mainstream media sources only caught up with months or even years afterward, if they had the courage to even touch it at all. Including more than 50 one-on-one interviews with experts, this collection taps into some of the nation’s most astute political minds to present a preponderance of evidence as to why Hillary and Bill’s return to 1600 Pennsylvania Avenue would be disastrous for America.

For example, all in one place you’ll find the real truth about the Benghazi scandal; Hillary’s covering up of Bill’s sexual assaults against innocent victims; the email scandal that has rocked her candidacy; her recent shady business dealings and money laundering; and much more.

At a time when this nation’s future hangs on a delicate thread, every argument must be made to prevent Bill and Hillary from inflicting any further damage on the nation. Crowning Clinton arrives at precisely the right time. This new, potent anthology is a must read for those who can’t rely on other venues for their news. 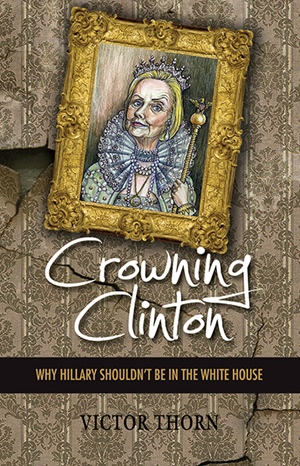 6 Comments on AUDIO INTERVIEW: Why Clinton Cannot be Allowed in the White House