Matthew Heimbach is one of the leading nationalists and activists in the United States today, perhaps best known for founding the White Student Union at his alma mater, Towson University just outside Baltimore, Maryland. After graduating, Matt helped found the Traditionalist Youth Network, an organization dedicated to  providing “resources and support to independent groups of high school and college students throughout North America who are learning about the Traditionalist School of thought, helping one another apply the principles and spirit of Tradition in their lives, and organizing in defense of Tradition on their campuses and in their communities,” according to the organization’s website. Matt is also chairman of the recently formed Traditionalist Worker Party, which describes itself as “America’s first political party created by and for working families.”

As chairman of the Trad Worker Party, Matt has organized a conference in Harrisburg, Pennsylvania on Saturday, February 13, where a number of prominent speakers will be featured.

John Friend spoke with Matt, who outlined his involvement in the nationalist struggle, the importance of race and identity in an increasingly diverse and multicultural America, the Traditionalist Worker Party, and more, in this interesting interview (23:44).

HARRISBURG, Pa.—Roughly 60 dedicated activists and speakers attended a conference held at the State Museum of Pennsylvania in Harrisburg, Pennsylvania, the Keystone State’s capital, on Saturday, February 13. AMERICAN FREE PRESS was on the scene to cover the event, network with like-minded activists and truth-seekers, and promote America’s last real newspaper. The conference brought together a number of activist organizations, including the Traditionalist Worker Party, a newly formed political party whose chairman, Matthew Heimbach, at the young age of 24 already has a long history of political activism and organizing. 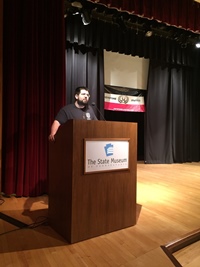 In 2012, Heimbach founded the White Student Union at Towson University just outside Baltimore, Maryland, an organization that explicitly represented the interests of white students at the university and sought to organize events and speeches on campus.

“The main purpose of the conference was to unite productive activists within the pro-white cause and provide practical solutions, which include getting involved in local electoral politics, to erase the problems facing our people today,” Steve Smith, a leading member of Keystone United who also spoke at the conference, explained to AFP. 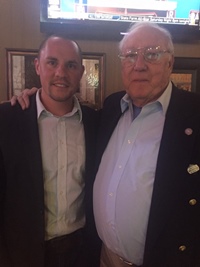 Heimbach used the opportunity to promote the Traditionalist Worker Party and spoke eloquently about the party’s platform, key message, and basic ideology.

“We had representatives from half a dozen organizations who were able to promote a united nationalist front,” Heimbach told AFP. “Infighting and disunity has plagued the American nationalist cause for generations, so one of the goals of the party is to heal these divisions and unite all devoted patriotic organizations. The fact we had six different groups together along with both white-and blue-collar folks, including a lot of families, shows that our party is positioned to represent the interests of white Americans as a whole. Our goal was to bring these groups together under the Traditionalist Worker Party, and we achieved that objective. 2016 is going to be the year of nationalism both in Europe and in the United States.”

The Traditionalist Worker Party bills itself as “America’s first political party created by and for working families” whose mission is “faith, family, and folk against the politicians and oligarchs who are running America into the ground.” The party aims to build a nationwide network of local grassroots activists and organizations “who will lead Americans toward a peaceful and prosperous future free from economic exploitation, federal tyranny, and anti-Christian degeneracy,” according to the party’s official website.

A central theme of the conference was the struggle between the forces of nationalism and globalism, a topic Heimbach addressed at length during his opening speech.

Get the a 1-YEAR PRINT SUBSCRIPTION to AMERICAN FREE PRESS—America’s Last Real Newspaper (U.S.) Trad Worker Party Special for only $39!

“The battle of the 21st century is globalism versus nationalism because of the very nature of globalism,” Heimbach explained to AFP. Globalism “is an ideology of dismantling and destroying ethnic, religious, and cultural identities in order to create a world that is one market, under one set of standards, and under the boot-heel of global financial oligarchs. In generations past, nationalists on the left and right side of the spectrum have spent time fighting one another while globalism breaks down our respective national sovereignty.” 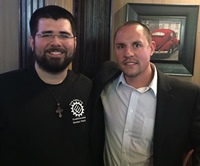 “Both the Republican and Democratic elites support legal and illegal immigration for the best interests of their billionaire donor class,” Heimbach explained. “Both of these two parties support free trade agreements that have gutted the industrial economy of America and shipped millions of jobs overseas while in turn crushing the agrarian economy of Mexico and Latin America. These two parties drive down our wages and destroy our jobs while they then encourage the people they impoverished with their policies in Latin America to migrate to America to compete with American workers for the few jobs that are left.”

Heimbach hopes to network and collaborate with other nationalist political parties and organizations around the world. In recent months, he has met with and spoken at events in Europe organized by the Golden Dawn in Greece and the National Democratic Party of Germany.

“In order to secure the best interests and future for our people, we can and should unite with nationalists from other nations because healthy and prosperous nations around the globe are in the best interests of everyone, except of course the Zionists and their gentile lackeys,” Heimbach stated. “We as American nationalists should support the right of self-determination and self-governance for all peoples in all nations, instead of letting the forces of international finance dominate the lives of free people, forcing us to fight one another for the benefit of the bankers.”

By all accounts, the conference was a huge step forward for the American nationalist movement.

“The conference brought together a lot of very active members in our cause to plan and organize exciting events in the near future,” Bob Gaus, a long-time member of Keystone United who played a leading role in organizing the conference, told AFP. “We hope to increase awareness of our culture and promote the fact we care about and cherish the bloodlines of our people and are willing to stand together as one to make our goals a success.”

“The American nationalist movement is ready for this next step,” Heimbach explained. “We need a party that will fight for white working- and middle-class families in an age of betrayal by both the Republican and Democratic parties. Our positions on strong social values, nationalist economics, and community building make us a unique party in America.” 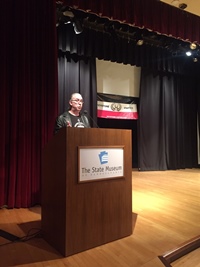 The Traditionalist Worker Party has big plans in the coming weeks and months.

“We will be working over the next few months to have regional meetings throughout the United States, and every local chapter will continue to hold monthly meetings,” Heimbach told AFP. “We will be launching our quarterly publication for our members and we have a large number of community events and demonstrations planned for the spring and summer. We have chapters in the Mid-Atlantic, Kentucky, Indiana, Ohio, and California, and new chapters are forming every single week. The party is off to a great start, and with the help and support of nationalists throughout this country we will begin a true movement that will change American politics forever.”

Interested AFP readers are encouraged to learn more about the Traditionalist Worker Party by visiting their website, www.TradWorker.org. Stay tuned for future updates on the party.

John Friend is a California-based writer who maintains a blog.