Richard M. Schickel, who worked for the Internal Revenue Service (IRS) for 33 years, has written a tell-all book that’s sure to keep you entertained and educated.

Dave Gahary had the opportunity to sit down with Richard to discuss his experiences in the IRS as explained through his book, IRS Whistleblower: My 33 years as an IRS Insider will show you the secrets of how to engage the IRS and win, in this informative interview (26:46). 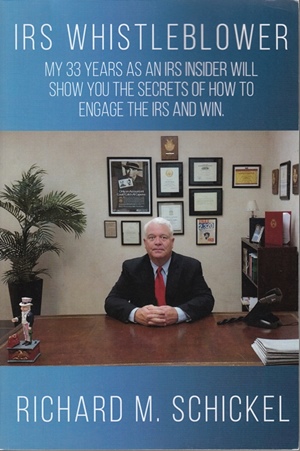 A new book released by a former employee of the Internal Revenue Service (IRS) confirms what many AMERICAN FREE PRESS readers have suspected for decades: the revenue collecting arm of the United States Department of the Treasury is a rogue agency whose range is only limited by the amount of power each employee cannot grab. In fact, the IRS’s culture is one that rewards aggressive collection of taxes, and encourages violating the due process clauses of the Fifth and Fourteenth Amendments of the U.S. Constitution.

Richard M. Schickel was not just a life-long IRS revenue collector, but a highly regarded, and awarded, one as well. Not only did he receive 65 performance awards, a record, including the Albert Gallatin Award, Treasury’s highest honorary career service award, but he received a letter from President Ronald Reagan for saving the life of a nine-year-old girl in a burning house, while in the field (a fascinating story detailed in the book).

He also wrote a book called Asset Recovery Guide for the IRS, which is still in use, and was a whistleblower punished by IRS for reporting cases of inequality in the application of the tax laws, including abuse techniques used to single out and punish taxpayers.

His new book, IRS Whistleblower: My 33 Years as an IRS Insider Will Show You the Secrets of How to Engage the IRS and Win, details his 33 years at IRS, revealing warts-and-all, as well as a how-to-guide to interacting with the hated agency.

AFP caught up with Schickel and conducted a 30-minute exclusive interview with the former revenue henchman, who started off by explaining what he did for the IRS.

“I was a senior revenue officer,” he began, “which means I was the guy who would take your bank account, take your wages, seize your house, your car, your business, whatever it was, in an effort to collect taxes.”

Schickel worked 22 years in Chicago and 11 in Tucson, retiring in December 2013.

AFP asked Schickel the motivation for the book.

“I’ve always thought that the tax code should be enforced the same way in New York and Chicago and Philadelphia and Los Angeles and even here in Tucson Arizona,” he explained, “and I was just shocked with the discrimination I saw.”

The uneven application of the tax laws wasn’t the only reason he wrote the book, however.

“The biggest reason was I was outraged that the IRS pays out $50 billion every year in false refunds,” he said. “Why are we allowing this agency that has such power and control over us to do this? I thought this was something that people need to learn about.”

The central themes of the book are power, fear and abuse.

“Part of the book is my memoirs,” he explained, “and part of it is about how the IRS abuses people and how I abused people with my official powers, and how the taxpaying community abuses the IRS, by filing fraudulent refunds.”

“So,” he continued, “part of the book makes me want to go down to Belize, which doesn’t have an extradition treaty with the United States, and file tax returns. Because the IRS will send you checks.”

The book details how the one constant with all IRS employees is fear, an everyday fear of doing something wrong.

“I remember one case where I went out and collected from a prominent person who was in the newspaper at least once a week,” he said. “I knocked on the door of his house, and I left a letter with his housekeeper. He owed $1 million, and the next day, there was a certified check sitting in my office for $1 million.”

An amazing accomplishment you might think, but not in the IRS.

“I felt pretty good about myself that day,” Richard explained, “so I went into the manager’s office and said, ‘Wow. Look, it cost very little money. I drove up and knocked on the door, and I got a check; the case is closed.’ And the manager gave me a negative recommendation because I hadn’t filed a notice of federal tax lien within so many days of receiving the case.”

Schickel explained how this type of reaction to a job well done filters down to the rest of the workforce.

“Other employees see that and it makes them reluctant to go and show off anything good that they were doing,” he said. “So it’s kind of like hunker down, stay hunkered down, be productive, and always get to the next case. You’re not doing enough.”

He also explained why the job was so difficult.

“This kind of work was mentally and emotionally exhausting,” he said. “I wasn’t just a tax collector, because you get involved in people’s lives. I was a marriage counselor, a social worker, a financial advisor, because I had to go in and find out what went wrong in people’s lives that they owed these taxes.”

One of the examples Richard gives in his book of how the IRS treats taxpayers differently is explained on page 39:

Tithing to a church is not allowed except in Utah with its prominent Latter Day Saints population where it is allowed. This is not written down anywhere; is just standard practice. There are many examples of local management making up their own rules as they go along

AFP asked why someone should spend $20 to buy this book.

“The biggest part of IRS is about fear,” he explained, “and I teach in the book how to talk to the IRS and how to take away the power they have over you by getting yourself together before you go and talk to them. This book explains the rights that you have; you need to know the secrets of the IRS, and part of it is procedural.”

He continued: “When you take away the fear, you give people hope, and that was the idea of the book.”

For those who owe taxes, there is a light at the end of the tunnel.

“Even if you do owe taxes,” Richard explained, “the IRS only has 10 years to collect.”