Former Arizona Sheriff Richard I. Mack, best known for his landmark victory lawsuit against the Clinton administration’s illegal application of the Brady Handgun Violence Prevention Act, more commonly referred to as the Brady Bill, and as the founder and president of the Constitutional Sheriffs and Peace Officer’s Association (CSPOA), is continuing his mission of educating Americans fighting back against encroaching federal power.

Dave Gahary had the opportunity to sit down with Sheriff Mack to discuss CSPOA’s latest conference celebrating the United States Constitution, Lighting the Lamp of Liberty, taking place September 16, 17, and 18, in this informative interview (20:35).

• Former Arizona sheriff Richard Mack takes his case of too much federal power to D.C.

AMERICAN FREE PRESS readers are no doubt familiar with former Arizona Sheriff Richard I. Mack and the significant contributions he handed, and continues to hand, all Americans who cherish the protections enshrined in the United States Constitution. Sheriff Mack was the first sheriff in American history to sue the federal government to stop gun control, using the Tenth Amendment to emerge victorious. The Supreme Court decision in his case was so important, its significance cannot be overstated.

Now, Sheriff Mack is celebrating Constitution Day, September 17, by bringing his battle to reign in out-of-control federal power to Washington, D.C. Mack’s Constitutional Sheriffs and Peace Officers Association (CSPOA) is spending three days in our nation’s capital with his “Lighting the Lamp of Liberty” event, where after a presentation at the National Press Club, representatives of the organization will hand-deliver the CSPOA Resolution to all 535 members of Congress, reminding Representatives and Senators “that any federal officer, agent, or employee, regardless of supposed congressional authorization, is required to obey and observe limitations consisting of the enumerated powers as detailed within Article 1 Section 8 of the U.S. Constitution and the Bill Of Rights.” Article 1 Section 8 enumerates Congress’s legislative powers. 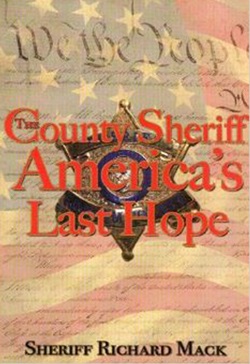 This short but powerful book is a must read for all citizens, sheriffs, and government officials that we may all work to return America to the constitutional republic she was meant to be. Amazing as it might be, the sheriff can make this happen!

This reporter had the opportunity to interview Sheriff Mack on the afternoon of September 16, to get more information on the event and the strides the CSPOA has made since its creation a few years back.

Sheriff Mack was asked to summarize the importance of the Mack and Printz v. United States.

“The case is the most powerful Tenth Amendment decision ever in the history of our country,” Mack said, “and everybody needs to read it. We actually stopped a gun-control movement known as the Brady Bill Movement, which would’ve completely gutted the Second Amendment, destroyed gun shows, destroyed gun dealers and gun shops all across the country, and was going to regulate out of existence ammunition, which is what they’re trying to do now.”

AFP asked why the government would attempt to neuter the Second Amendment.

“Because government, of course, does not like armed peasants,” he stated bluntly.

Although the CSPOA come into existence about three to four years ago, “it’s really made a huge impact already,” explained Sheriff Mack, “because in just about every Sheriff race in the country, you’ll hear either citizens or at least one of the candidates say, ‘I’m a Constitutional sheriff, I will be a Constitutional sheriff.’ And that’s a huge paradigm shift. It used to be that, you know, I’m just gonna be the guy to patrol the neighborhoods, serve papers, and try to protect people as best I can. And now it’s on to a new level. Yes, I will be here and defend you and your families against the federal government, against incursions, and against tyranny, and I will be the guard of the Constitution in this county.”

After this interview, Mack explained what was on the agenda.

“We are having a social tonight and a meet-and-greet,” Mack began, “and during that time tonight we’ll be watching the 75th anniversary of Mr. Smith Goes to Washington. And so were kind of getting our own patriotic juices flowing tonight by watching Jimmy Stewart in that great movie, an iconic movie, about Washington D.C. politics.”

“What we really want to focus on, and what we will say tomorrow right at the beginning, is that there really are no solutions to any of this in Washington D.C.,” Mack explained. “It’s really a shame that they don’t do their job, or respect the rule of law, or secure our borders, so we have to come up with other solutions. And our sheriffs and local officials have the power to provide those solutions. And we make the federal government irrelevant and we get governors to send the National Guard down to the borders and get those borders secure.”