With the grand jury decision expected to be made public at any moment on whether or not Ferguson, Missouri police officer Darren Wilson should be charged with the shooting death of Michael Brown, the mayor of St. Louis is gearing up for “widespread civil disobedience,” while business owners have been “battening down the hatches” for weeks, expecting the same, and gun sales are spiking. 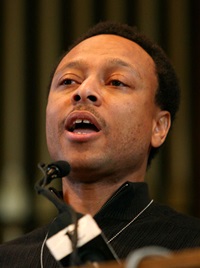 Dave Gahary discussed the situation in Ferguson with Michael McPherson, the executive director of Veterans for Peace and the co-chair of the Don’t Shoot Coalition, in this informative interview (15:05).

• Many feel the tagline adopted by the Ferguson protestors, ‘hands up, don’t shoot,’ should be changed to ‘pants up, don’t loot’

With the grand jury decision expected to be made public at any moment on whether or not Ferguson, Missouri police officer Darren Wilson should be charged with the shooting death of Michael Brown, the mayor of St. Louis is gearing up for “widespread civil disobedience,” while business owners have been “battening down the hatches” for weeks, expecting the same, and gun sales are spiking.

Michael McPherson, the executive director of Veterans for Peace and the co-chair of the Don’t Shoot Coalition, sat down with this reporter to discuss his background, the demands of the coalition, and whether or not Michael Brown shares any responsibility for his fate.

“I’m a veteran of the Army,” he began. “I entered the Army reserve when I was in between my junior and senior year of high school. I went on active-duty after college as a lieutenant and came off active-duty as a captain, and stayed on the ready-reserve for about nine years and then resigned in 1999. So I have five years active, five years of reserve time. I fought in what they called the first Gulf War. I was in the 24th Mechanized Infantry Division. And I’m from Fayetteville, North Carolina where the 82nd Airborne is, Fort Bragg, so a lot of my family served in the military, so long history of being around the Army and certainly respecting military service and respecting troops. I’m just really concerned with how troops are used and I think our foreign policy is one of trying to control much of the world, and I just don’t think that’s a good idea, and it can certainly be the downfall of this nation in the long run.”

“The Don’t Shoot Coalition are a number of a local St. Louis organizations that sprung up as a result of the crisis after Michael Brown was killed by officer Darren Wilson,” he explained.

McPherson detailed the members of the coalition.

“It’s a very broad spectrum of civic organizations involved because they realize that this moment, regardless of if you feel like Darren Wilson killed Michael Brown because he was protecting himself or for other reasons, that we’re in a crisis moment and that tensions in the community surfaced by this incident and they need to be addressed. They want to address these issues because they believe you can’t have prosperity and peace without justice.”

“From our perspective, a violent, rebellious response won’t be constructive,” he said.

Mr. McPherson clarified his views of the uprising that took place initially.

“People wanted to characterize it at as being a riot,” he said. “A riot is when people do property damage because of a football game win, a basketball game loss or a pumpkin festival or something like that. But when communities express outrage and frustration after state violence or a great injustice, that’s a rebellion. Those are two different things, because they’re totally motivated by two different things. You can also have a violent rebellion or a non-violent rebellion, or nonviolent resistance. And for the past 90 days or so since Michael Brown’s killing, the vast majority of actions that have been taking place by activists around the region, have been nonviolent. So, this idea, which is permeating the region right now, that there is definitely going to be a violent response and that the protesters and activists are lawless and unruly and all that is just not the case. The vast majority of actions have been in the American tradition of taking to the streets and demanding redress; that’s what Americans do, and that’s part of change. There’s not ever been real change in Washington, D.C. They talk about elections bringing change, but elections don’t bring change, people bring change. And the changes that have happened in this country happened through people being active, people organizing people and making themselves visible, and that pushes the political system. So we’re just doing what Americans do. The idea for the coalition is to model the long-standing tradition of how Americans change things and hopefully pull any negative energy or violence into positive energy.”

“We have these rules of engagement in terms of how the police interact with protesters. We would like the prosecutor’s office to give the community prior notice of when the announcement will be made, so the community can get ready for it.”

“We’re asking for justice for Mike Brown and other cases of police brutality in the St. Louis region, including transparent and independent judicial investigations into allegations of excessive force, and an expanded Department of Justice investigation into patterns of civil rights violations by police. The second thing is an end to ongoing racial profiling across the St. Louis region, as documented by annual Missouri statistics. We want accountability for police practices and policies, including effective civilian oversight and review of shootings and other allegations of police misconduct. We want ongoing initiatives to ensure that local law enforcement departments represent the communities they serve. And we also commit ourselves to supporting efforts that lift up youth, provide leadership development, and promote the vote, so that our democratic institutions appropriately represent all segments of our communities.”

In reference to the autopsy report and the video of Michael Brown in the convenience store, McPherson was asked if there is any fault on Michael Brown’s end as far as the coalition is concerned.

“We can’t hear what’s going on in that video, and I haven’t seen an interview with the people involved explaining what was going on. So obviously the video’s not a good video in terms of Michael Brown’s conduct. Now in terms of the forensic evidence, a lot of people in the news said it supports the police officer story, which is true. But it also supports Dorian Johnson’s story. Both Darren Wilson and Dorian Johnson said there was a struggle in the car between [Wilson] and Michael Brown. So as far as I can see, the forensic evidence supports both stories and doesn’t undermine either one. So, for us, the issue is that Michael Brown was not armed and that multiple witnesses, including witnesses who have nothing to do with the community, said that his hands were up. There should be at least a trial so that all this information can be put out in the public eye and a jury can make a decision.”

“The coalition is concerned with the issues that have surfaced as a result of Michael Brown’s killing. The lack of accountability and the lack of transparency. Just the police relationship with the community and how the police police the community. A lot of things have been uncovered, and in fact there’s been some reforms that have been put into place and also continued negotiations, so that seems to me to make it clear that there were some changes that were needed.”

McPherson was asked if he thought there was a lot of racism in the St. Louis/Ferguson area.

“Yes, there is great deal of racism in the region…and I think that it plays a big role in what’s happening. There’s also a class issue; it’s not just about color, it’s also about the relationship between people with means and poor people. So, both of those things need to be addressed.”

“There are challenges in the black community that need to be addressed, and in fact they are being addressed every day,” he explained. “There are all kinds of activists and organizations working on the ills within the black community. And many of these ills, if not all of them, are the same ones that are throughout all of our communities. We have a violence problem in United States of America that we need to change; we need to work on it. The police should not be killing unarmed people like they are. All across the country we have seen all kinds of police abuse. And police need to act differently; they need to be more respectful. I’ve talked to many young, black men who are just regular people that are not violent who are stopped and asked ‘Do you have guns?’ or ‘Where did you get this money from,’ I mean just crazy questions. It’s not just happening to black people, it happens to other people, too, but it happens to black people more. People have responsibility for individual actions, yes, but that’s not what this is about. This is about racial profiling and looking at a whole community as if all of us are criminals. And by far most black people are not, especially the friends I hang out with, because I’m not gonna be hanging out with criminals, unless I’m talking to them about moving their life in a different direction.”

1 Comment on AUDIO INTERVIEW & ARTICLE: Ferguson on the Brink