In a surprise move, Democrats have okayed the new USMCA trade deal negotiated by the Trump administration.

While Democrats hunkered down in the basement of the U.S. Capitol building, twisting recent events to make a case for impeaching the president, Donald Trump took a victory lap as news broke on Dec. 11 that congressional leaders would accept his renegotiation of the North American Free Trade Agreement (NAFTA).

Called the United States-Mexico- Canada Agreement (USMCA), Trump took to the internet to celebrate, declaring with his usual bravado that the USMCA “will be the best and most important trade deal ever made by the USA.” He added that NAFTA, which was embraced by both Republicans and Democrats, will go down in history as “our country’s worst trade deal.”

Trump’s new deal is a significant upgrade from the free-trading NAFTA, which made immigration worse for the country and sped up the de-industrialization of the United States as companies flocked to Mexico in search of cheap labor and fewer regulations.

A Trump administration report projected that the new deal would create 76,000 auto jobs in the United States over the course of the next five years. That translates into a more than 7% increase in employment over the current 990,000 U.S. auto workers.

The deal will also force Mexico to treat its workers better. AFL-CIO President Richard Trumka issued a statement in support of the deal, noting: “For the first time, there truly will be enforceable labor standards—including a process that allows for the inspections of factories and facilities that are not living up to their obligations.”

In order to enforce this, a new federal committee will be set up to make sure Mexico sticks to its agreed-upon labor reforms and obligations and a set of benchmarks will be implemented for Mexico to meet in implementing the reforms.

Farmers are going to benefit from the USMCA as well. Canada and Mexico are already the two biggest export markets for U.S. farmers and ranchers. The USMCA will keep tariff rates at zero but will force open the Canadian market to U.S. dairy, poultry, and eggs. In return, the United States will allow more Canadian dairy, peanuts, and peanut products, as well as sugar, to cross the border.

In all, the International Trade Commission, a federal government agency, reports that the USMCA is expected to create 176,000 jobs over the next six years, including vital manufacturing jobs, and increase the gross domestic product by nearly a half percent—no small feat considering the U.S. has been losing jobs and was hit by a major recession less than a decade ago.

With the USMCA, Trump has much to celebrate. As the U.S. economy continues to grow and even the broadest category of unemployment shrinks, it’s proving to be a very merry Christmas for everyone in the White House, who negotiated this new deal. 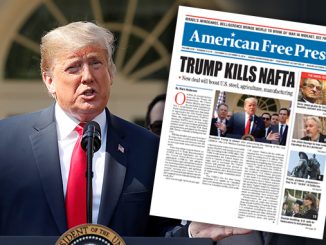