During his 2016 presidential campaign, Donald Trump became the first major presidential contender to criticize American trade policies since Ross Perot. So-called “free” trade has long been an essential plank of the party platforms of both “opposing” political parties.

The same kept media was silent after NAFTA was passed in 1993, and the negative effects were obvious. Critics estimated America lost about 20% of its manufacturing jobs during the first 14 years after NAFTA was enacted.

When China entered the World Trade Organization (WTO) in 2001, the impact on American industry was compounded. No less an establishment organ than Forbes magazine would report, on Feb. 14, 2011, that the United States had averaged a loss of 50,000 manufacturing jobs per month since China joined the WTO.

In 1985, Bureau of Census figures showed a manageable deficit with China of $6 million. It was $365 billion by 2015. That represented the largest trade deficit any nation has ever had with another.

Much of the same mainstream liberal press that would blast Trump’s tariffs felt quite differently about the subject a few years previously. The Huffington Post would reflect this, in a March 8, 2014 story headlined, “NAFTA at 20: One Million U.S. Jobs Lost, Higher Income Equality.” The article reported the results of a study by Public Citizen, which noted how the disastrous trade deal had caused a dramatic increase in illegal immigration and corporate welfare, along with a corresponding decrease in American manufacturing jobs.

While corporate giants like General Electric and Chrysler promised to create specific numbers of new jobs if NAFTA was approved, and Bill Clinton assured the public that “NAFTA means jobs,” there were instead significantly increased layoffs and outsourcing. The lure of cheaper labor in countries like Mexico motivated corporations to move their production there.

Trump tapped into the huge discord in the general population with our senseless trade policies, which Perot so memorably predicted would produce a “giant sucking sound” of jobs leaving the country. Trump’s persistent snipes at “globalism” invoked the wrath of an establishment long accustomed to pliable free-trade disciples in the political world. Trump’s website expressed his position on trade succinctly with the headline, “Our country is getting ripped off.”

When General Motors recently announced the closing of five domestic plants and the elimination of thousands of jobs, Trump was irate. In typical cockeyed establishment logic, Trump’s imposition of tariffs was somehow responsible for GM’s actions. Trump blasted the corporate giant and threatened to end the federal tax credits it has long enjoyed.

“Very disappointed with General Motors and their CEO, Mary Barra, for closing plants in Ohio, Michigan, and Maryland.” Trump tweeted. “Nothing being closed in Mexico and China.”

GM memorably benefited from one of the most generous examples of corporate welfare imaginable, when taxpayers bailed it out in 2009. In a clear reference to this, Trump took to Twitter again, declaring, “The U.S. saved General Motors, and this is the thanks we get! We are now looking at cutting all @GM subsidies, including for electric cars.” GM’s Barra received almost $22 million in compensation in 2017, some 295 times what the average employee at the company made.

While Trump soundly chastised GM and Barra in particular, the globalist giant seemed unmoved.  Labor leaders in Ohio, concerned with the closing of the plant in Lordstown, stated that they were unable to reach any GM officials on the phone. Barra exemplifies the establishment liberal mindset; while paying herself quite handsomely, she ruthlessly eliminates blue-collar jobs, all the while touting an environmentally friendly mantra of “zero crashes, zero emissions, and zero congestion.”

Harley-Davidson angered the president a few months earlier by announcing a move of some of its production overseas.

Beginning with his withdrawal from the Trans-Pacific Partnership, trade has been one of the areas where Trump has remained true to his campaign rhetoric.

With cheap labor dear to the hearts of globalists everywhere, that isn’t making the Deep State happy. 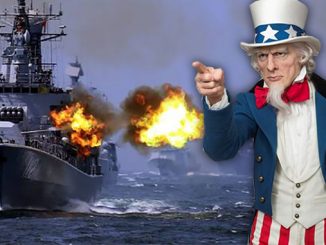 Will Biden Kow Tow to China?