A former UK psychotherapist and feminist is now in hot water with social media outlet Twitter. Her crime? When writing about efforts to reform obstetrics, she used the words “mother” and “women,” and didn’t invoke newspeak like “birthing people,” “vulva owners,” and “menstruators.”

Activist Milli Hill is clearly on the left politically, but she has been dogpiled and mercilessly attacked after she stated unequivocally that, when she talks of child birth, she will refer to “mothers” and “women,” instead of caving to the demands of a very tiny and vocal minority that seeks to force everyone to use their awkward, modern vernacular.

Up until the past few years, no one in the right mind would consider Hill’s views to be controversial let alone worthy of response. Now, however, Hill has been forced to write a lengthy response to the few and very vocal activists who took her to task for standing up for her own views.

Now she has even been cut off from a birthing charity that she has long supporter over her opinions.
on July 27, Hill explained what happened to Spiked magazine:

People were saying my book should be thrown in the bin, that I was transphobic, toxic, dangerous, deliberately causing harm, hateful, vile and that I shouldn’t be allowed within a kilometer of a pregnant person.

On July 10, Hill defended her rational position, writing a lengthy post on “Medium.” You can read her entire defense here, but the salient point is that, from a biological perspective, all things associated directly with childbirth affect women, so even if you want to say “birthing people” or “vulva owners,” why not also mention women, otherwise, as Hill notes, women are going to be erased and all the hard work pioneering women have put in over the years will be disregarded.

On a side note, Canadian news detailed a “woman,” who was arrested in early July for molesting at least one child in a park. Below is a screenshot of the article along with a profile of the criminal dirtbag, who was caught harming kids. The “women” in question, Ruby Eby, clearly has a beard. 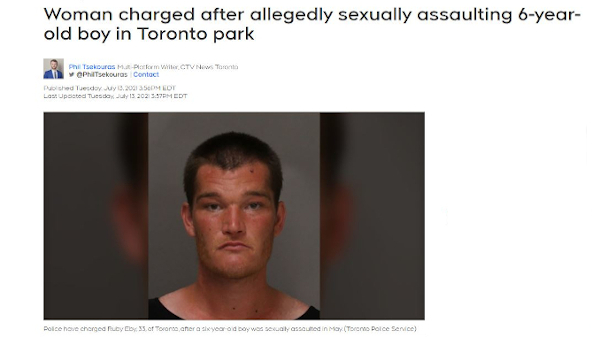 Is this really where the world is headed?