One of the greatest American patriots, Willis Allison Carto, has peacefully passed away at home on Monday, October 26, 2015, after doing more than any one person, for over five decades, to draw attention to the New World Order.

And there’s no question—as even Carto’s most bitter critics will acknowledge—that Carto has unquestionably been, in the broadest sense, the most influential figure in what generally has been been referred to as “the far right” in America.

Willis A. Carto: An Overview of a Remarkable Career in the Global Public Arena

Long at the forefront of the Nationalist movement in the United States and the historical Revision­ist movement (both in the U.S. and worldwide), Willis Allison Carto was born on July 17, 1926, in Fort Wayne, Indiana and raised in Ohio, where the young Carto developed an early interest in journalism.

After graduation from high school in 1944, he went into the Army. In his own retrospective words, Carto’s efforts in the military were “to fight for the glorious democracy of my country, the survival of Soviet communism, a third and fourth term for Roosevelt, a chance to kill Germans by the thousands as desired by Churchill, Eisenhower and the Zionists, part of Palestine for them as a bonus, vast riches for the bankers and war suppliers, coffin makers and flag makers.”

He earned a Purple Heart when he received a memento from a Japanese infantryman on Cebu Island in the Philippines on May 5, 1945. Carto carries the scars of that wound to this day.

In 1953, with Aldrich Blake, he founded Liberty & Property, Inc. and published the first edition of seven which followed of the First National Directory of “Rightist” Groups, and Organizations in the United States and Some Foreign Countries. From 1955 until 1960, under the venue of Liberty and Property, in 1955, Carto published Right, a monthly newsletter that pioneered new thinking within the historic America First movement.

From 1954 to 1958 Carto was active in the Congress of Freedom, serving as its secretary and as a member of the board of directors. This was one of a variety of grassroots populist and nationalist organizations that Carto cooperated with in the earliest days of his career.

In 1955, Carto laid the groundwork for the establishment of Liberty Lobby, the Washington, D.C.-based populist institution, when he established the lobby’s research department in the nation’s capital.

In 1956 Carto confounded the increasingly influential liberal-internationalist wing of the Republican Party when he established a Conservative Republican Headquarters at the Republican National Convention in San Francisco, from which he distributed some 100,000 pieces of literature, including, most notably, a controversial and provocative circular entitled “Ike Renominated In Spite of His Red Record.”

From 1957 through 1961, Carto was a member of the national advisory board of We, The People.

Colonel Curtis B. Dall, the former son-in-law of President Franklin D. Roosevelt (and an outspoken critic of FDR’s policies), signed on as chairman of Liberty Lobby’s Board of Policy, the populist institution’s formal membership organization.

In 1964 Carto launched a historical and cultural journal, Western Destiny magazine, which he published until 1966, at which time he merged that journal with the prestigious American Mercury magazine (founded by American iconoclast H.L. Mencken) of which Carto assumed ownership in 1966.

From August 15, 1965 through September 15, 1976, Carto published and edited The Washington Observer newsletter, which reported “inside” news on scandals and other intrigues ignored by the “mainstream” media in America.

During the mid-1960’s Liberty Lobby’s base of support expanded exponentially and Liberty Lobby emerged, beyond question, as the largest independent American populist and nationalist institution, unique for its stand against counterproductive American meddling abroad. In 1975 Carto began publication of Liberty Lobby’s weekly newspaper, The Spotlight, which reached considerably more than a million readers at its zenith. Some 1,350 weekly issues were published over a period of 26 years.

In 1979 he founded the Institute for Historical Review (IHR) and launched the scholarly Journal of Historical Review (of which 48 quarterly issues were published until 1993). He also organized the first International Revisionist Conference in Los Angeles, followed by 10 others. The first issue of the monthly IHR Newsletter was published in January 1981, followed by 90 others until late 1993.

In 1994 Carto founded The Barnes Review, a bimonthly magazine of authentic history, of which he is the publisher and editor.

In 2001, in collaboration with the former staffers from Liberty Lobby, Carto began publication of the AMERICAN FREE PRESS, a weekly newspaper in the populist mode of The Spotlight.

Throughout his career, he has published over 200 titles of books dealing with different subjects, notably his own work, Populism vs. Plutocracy: The Universal Struggle, an historical overview of the populist movement in the United States. 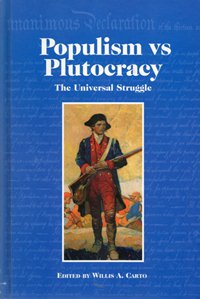 A wide-ranging selection of Carto’s representative works appears in the book, An Appeal to Reason, assembled by Michael Collins Piper who has been closely associated with Carto since first coming to work for Liberty Lobby in 1980. 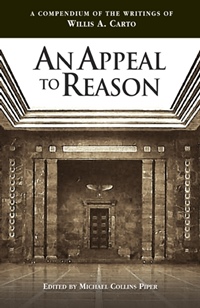 Also included as a special appendix in this volume is an overview of the amazing array of publications Carto has sponsored throughout his career as well as a gallery of some of Carto’s diverse friends and associates with whom he’s worked over the decades.

The idea for publication of this collection of Carto’s own writings originated with Matthias Chang, a Malaysian barrister of Chinese Catholic descent who—from abroad—admired Carto’s longtime contributions to the discussion of international affairs.

Carto lived in Virginia in the company of an extraordinarily large dog. Several cats, previously in residence, are now deceased. 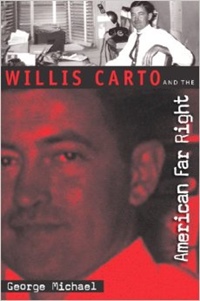 23 Comments on Willis A. Carto, American Patriot, Dead at 89