Way back in June and July, as the Democratic presidential primary season was heating up, the ten Democratic contenders practically fell over each other to tell voters that they would massively scale back U.S. immigration laws, bringing the United States nearly to open borders. They would abolish the agency that enforces U.S. laws, Immigration and Customs Enforcement, and stop deporting illegal aliens hiding out across the country. Since the spread of covid-19 in the United States, brought in by foreigners visiting the U.S. and citizens traveling abroad, that talk has all but stopped from leading politicians—especially as liberal countries like Canada go so far as to shut down their own borders.

Here is how Washington, D.C. daily Politico reported on the June 27 Democratic debate in Miami: “when it comes to just how pro-immigration—well, it’s hard to exaggerate how dramatic a shift this is from the approach of the past two Democratic presidents.”

Politico then went on to compare the immigration policies of former Presidents Bill Clinton and Barack Obama to the platforms being advocated by the Democrats.

Since covid-19 has started spreading in communities across the U.S., however, those once-outspoken advocates for what is essentially open borders have firmly shut their mouths. 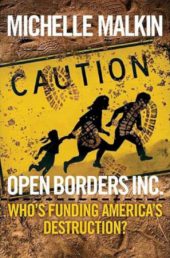 Oddly enough, Obama, who is almost considered a saint these days by Democrats, was quoted by Politico as saying in a 2014 interview with ABC News, “That is our direct message to the families in Central America: Do not send your children to the borders.” The U.S. Border Patrol, he added, should be able to “stem the flow of illegal crossings and speed the return of those who do cross over . . . Undocumented workers broke our immigration laws, and I believe that they must be held accountable.”

The very reason countries police their borders is to control and regulate who is entering and leaving. During times of pandemics, war, and other serious troubles, it is much easier for a country to mobilize and tighten up controls than it is to be forced to scramble when no existing resources are in already place.

On March 16, the far-left leader of Canada, Prime Minister Justin Trudeau, gave a press conference where he told reporters, “We will be denying entry to Canada to people who are not Canadian citizens or permanent residents. . . . It is time to take every precaution to keep people safe.”

Up until February, Trudeau was promoting open borders in his speeches and on his social media, claiming he wanted to make Canada the first “post-national” country.

Thankfully, everyone realizes that views like this are not just grossly naïve, they’re actually deadly.

3 Comments on Where Are the Open Borders Advocates Now That Covid-19 Has Hit?