• No immediate evidence suggests Jim was the victim of foul play, but a pathologist wants to examine all possibilities before releasing final ruling on cause of death.

After the tragic death of Jim Traficant on September 27, the phones at AMERICAN FREE PRESS began ringing off the hook with calls from Jim’s fans wanting to find out more information. Most callers were devastated by the news and seemed to feel that Jim had been murdered. Although there is no real proof of such a conspiracy, the overwhelming majority of the callers was convinced this was the case.

At this time, there doesn’t seem to be any concrete evidence of foul play. However, the possibility cannot be ruled out, as there are several anomalies with the official story that need to be examined.

The people who directly witnessed the incident are being suspiciously tight-lipped about what occurred. Andrew Thomson, the only eyewitness to the accident and the one to call 9-1-1, is not giving any interviews and even wanted his identity concealed. All interested parties have is Thomson’s 9-1-1 call saying Jim was pinned under the overturned tractor and didn’t appear to be breathing.

Perhaps the most important news has come from the Mahoning County Coroner’s Office, which reported that the cause of Jim’s death was positional asphyxia, meaning Jim was pinned in such a way that he could not breathe.

According to forensic pathologist Dr. Joseph S. Ohr, Jr., who completed the autopsy on September 29, Jim never suffered a heart attack prior to the accident, as was widely rumored, nor was there any trace of drugs or alcohol in his system. More significant was Ohr’s finding that Jim had “no crushing injuries” to his body, as was reported from sources at the hospital.

The official story is that Jim’s tractor ran over a “blade” or scraper and the front end was elevated to the point that it flipped backward. Jim remained fixed on his seat as the tractor swung 180º over him. Being that the seat was lower than the top of the wheels and the top of the engine cover, Jim was compressed enough to restrict his breathing but somehow was not crushed by the one-and-half-ton tractor crashing on him.

Although Jim’s breathing appeared to have stopped due to the accident, after CPR was administered he began breathing on his own, and his heart was also beating on its own. The life support machines were only there as a backup.

Traficant never regained consciousness, however. His wife believed that Jim was already “brain dead” when the EMS got to him. “The brain can only go six minutes without oxygen,” she said, “and Jim went for seven-10 minutes before he got CPR; therefore, he is brain dead.”

Jim was breathing on his own even after he was taken off a backup respirator on September 26, and his heart was beating on its own. He was even snoring, according to family spokesperson Heidi Hanni.

“But there was no hope” of recovery, Hanni said. Jim was transported from St. Elizabeth Health Center in Youngstown to the Hospice of the Valley on September 26 “to make him as comfortable as possible,” according to Hanni. Jim died at 11:30 a.m. on Saturday, September 27.

Both of these seem to be wrong, however, as the coroner did not complete the autopsy until 5:30 p.m. on Monday afternoon.

The circumstances at the hospital, the hospice and the burial are somewhat vague, especially in light of the coroner’s report. But even stranger is how the tractor flipped over. It is difficult to visualize how Jim, who was well acquainted with the tractor, the terrain and the barn, presumably traveling at low speed on flat ground, could have capsized like this. Both the barn and the tractor had lights on, yet Jim must have not seen a fairly large object. 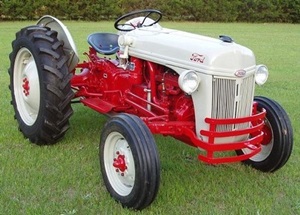 Although he reportedly had all his wits about him, Jim was unable to stop the tractor once he hit the object, and forged ahead forcefully enough to climb over the blade and flip the tractor. Even so, the blade was no taller than a foot and a half or so. How could it have caused the front of the tractor to rise high enough to flip over backward?

Ohr told this reporter that there’s been much speculation that something other than an accident may be to blame, given how careful a driver Traficant was. He wants to investigate further by examining the tractor and the EMS report that was taken at the time of the incident. He would also like to talk to Traficant’s trauma surgeon before making a final ruling on the cause of death.

Pete Papaherakles is a writer and political cartoonist for AFP and is also AFP’s outreach director. Pete is interested in getting AFP writers and editors on the podium at patriotic events. Call him at 202-544-5977 if you know of an event you think AFP should attend.

When word got out that Jim Traficant, America’s most courageous officeholder of our generation, was in a serious mishap on his family farm and then that he had died the next day—to say that it was a shock is the understatement of the year. This certainly goes for myself, as I had been privileged to ride with Jim to and from his last several speeches over the last six months.

A few mental snapshots from what would turn out to be my last hours with Jim . . .

On an 11-hour trip to Youngstown, Ohio, on September 17, I drove for the first nine hours with Jim staying awake the entire time helping me navigate. A little past Columbus, it was daylight, so Jim took over, but told me I would have to stay awake in the passenger’s seat. That was easy with Jim telling me stories about his time in Congress. When he was recalling stories, as when he walked onto a stage, Jim was back in his prime, animated, eloquent and seemingly ageless. I think he loved telling those stories almost as much as we loved listening to them.

We got home on September 19, and a week later James Anthony Traficant, Jr. was dead.

Always bigger than life, Jim was a great leader, a true political martyr and a folk hero. As his longtime acquaintance Don Hanni said on a 1991 edition of “60 Minutes,” “If Traficant walks into a room and speaks to 10,000 blue collar workers, when he leaves, 9,999 of them will be on his side.”

Where now? The consensus is that all of us must carry on PROJECT FREEDOM USA with the Traficant spirit, as best we can. He is and was the very symbol of righteous defiance of tyranny. We need to look to him as our symbol. Jim’s story is that of the fight for America.

If you want a lift in spirit and in resolve, search for the newly released, moving, six-minute YouTube video by Mike Wayne, titled “James Traficant—A Tribute.”

For the past decade, Cincinnati-native Jim Condit, Jr. has traveled the country speaking on important issues such as vote fraud and the vital need for  monetary reform in the United States. He also worked closely with Jim Traficant on the grassroots group, PROJECT FREEDOM USA, to help spread the word about Traficant’s plan for a retail sales tax. Currently, Condit is the Constitution Party’s congressional candidate in Ohio’s eighth district, running against the speaker of the House, Rep. John Boehner (R-Ohio). He can be reached at P.O. Box 11555, Cincinnati, Ohio 45211 or by calling 513-741-2095.

38 Comments on Was Jim Traficant Murdered?