Andrew Yang, a Democratic presidential candidate, is promoting a universal basic income for all Americans. Alaska, Kenya, and Finland have tried a UBI with mixed results.

Before attributing the idea of a universal basic income (UBI) to “Justice Democrats,” hanging off the left wing of American politics by a single daisy, consider that Alaska, a state that has only voted for one Democrat for president in its entire history (LBJ in 1964) has since 1976 given its residents a very popular version of the UBI.

UBI, often called a basic income guarantee, is a periodic cash payment delivered to all citizens of a region or country who qualify as residents. In most situations, a UBI payment is unconditional, other than variations determined by the recipient’s age. It is an automatic payment made at a set date (e.g., weekly, monthly, annually) and is neither determined nor adjusted by an increase or decrease in the recipient’s earnings elsewhere. It is paid to an individual and not to a couple or household. It is a right, where enacted, of an individual who meets residency requirements.

The payment made to Alaskan residents comes from the Alaska Permanent Fund, set up in 1976 to disburse money taken in from the state’s massive oil revenues. At the end of 2016, the fund was worth $55 billion. The amount given to Alaskans changes by year in accordance with the fund’s performance. At its peak, residents received $2,072 in 2015. In 2008, Gov. Sarah Palin (R) signed a bill whereby Alaskans received an additional one-time payment of $1,200. The idea behind Alaska’s annual payout is the communal ownership of natural resources. When the state and private companies have done so well mining Alaska’s natural resources, the people of the state should also share in those profits.

Despite the popularity of the Permanent Fund Dividend in an overwhelmingly Republican Alaska, skeptics are critical as to the feasibility of any UBI plan scaling upward to cover an entire population. Give Directly, a Google-led charity, experimentally funded selected villages in Kenya for fixed amounts of time. There were positive results that could be gleaned, yet questions arose as to how the villages were chosen, how payments were made, to whom payments were made, and over what period of time they could be made.

Finland’s government, over one calendar year in 2017 and 2018, funded 2,000 unemployed residents at a cost of approximately $600 per individual per month. Finnish politicians balked at expanding the program further.

A large-scale UBI would certainly mean expanding annual costs. As the UBI increases, representing a larger portion of a country’s GDP, there is concern that there would be less funds available for infrastructure and services to further help those lives a UBI system would seek to improve.

Andrew Yang is a Democrat running for president in 2020. On his campaign website Yang writes, “As president, my first priority will be to implement Universal Basic Income for every American adult over the age of 18: $1,000 a month, no strings attached, paid for by a new tax on the companies benefiting most from automation.”

Yang says he is running for president out of fear for his country. “New technologies—robots, software, artificial intelligence—have already destroyed more than 4 million U.S. jobs, and in the next 5-10 years, they will eliminate millions more. A third of all American workers are at risk of permanent unemployment. And this time, the jobs will not come back.”

A newly released report by the New Economics Foundation concluded that funds “would be better spent on reforming social protection systems and building more and better-quality public services.” Education, healthcare, transportation, public housing, and social services are cited as examples of social systems that could be improved rather than dishing out direct payments to consumers.

The argument for services over payments hinges on the destination of the funds. Those hoping to improve social services for residents resent the idea that direct payments would wind up back in the coffers of those businesses that have put millions of Americans out of work in the first place. Advocates of direct payments believe residents should share in a part of the profits when a nation’s natural resources have been sold both globally and profitably.

This is a much more complex idea than just being a handout to people with a limited motivation to work. A UBI is also not a replacement for a career, savings, or responsible financial decision-making. What a UBI could do, however, is balance out the profits of those companies and governments that have pillaged the natural resources and then expected the people to remain beholden to those importing the same resources (e.g., Americans and oil).

Whether scaling such a program beyond Alaska’s 737,438 residents is possible is a debate Americans will certainly need to engage in as technology continues to limit the possibilities of permanent employment.

S. T. Patrick holds degrees in both journalism and social studies education. He spent ten years as an educator and now hosts the “Midnight Writer News Show.” His email is [email protected]. He is also an occasional contributor to TBR history magazine and the current managing editor of Deep Truth Journal (DTJ), a new conspiracy-focused publication now carried by the AFP Online Store. 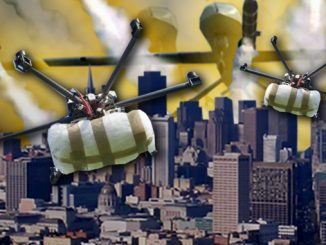 Drone Technology a Threat to All