U.S. missiles have ended up in the hands of the general leading a military effort to overthrow the U.S.-backed Libyan government. Yet again, the U.S.’s meddling in other countries’ affairs has come back to haunt us.

Four powerful Javelin anti-tank missiles were recently discovered in Libya by a group of government loyalists. The missiles were American-made and cost more than $170,000 each. In one of those ironies that are rife throughout the history of American interference in the affairs of other sovereign nations, the missiles wound up as part of the arsenal of Gen. Khalifa Haftar, who is leading a military effort to overthrow the present Libyan government, which the United States supports.

Evidence indicated that the weapons were originally sold to the United Arab Emirates in 2008. The discovery brought back for some people memories of the attacks at the Benghazi consulate in 2012. It is hard to avoid speculation that U.S. weapons such as these may have been used against Americans at Benghazi.

Then-President Barack Obama was aware of the Benghazi attacks some 90 minutes after they began, and the entire incident lasted more than 10 hours. While Obama and Secretary of State Hillary Clinton stood down and provided no support to the beleaguered officers of the CIA and State Department, it was left to a secret unit of former officers from the regime of Muammar Qaddafi that eventually evacuated them to safety. Clinton, of course, had helped overthrow Qaddafi.

“In other words, some of the very individuals the United States had helped remove from power during the Libyan revolution were the only Libyans [who] came to the assistance of the United States on the night of the Benghazi attacks,” a House committee report on Benghazi concluded. The committee found no evidence that U.S. forces outside Libya were ever deployed during the incident.

As has routinely happened during the history of modern American intelligence, the CIA was apparently unaware that this secret group of former Qaddafi military officers, calling themselves Libyan Military Intelligence, even existed. Four Americans, including Amb. Christopher Stevens, died in the attack. Incredibly, those Americans who played heroic roles were fired after arriving in Germany following the incident, left responsible for finding their own way back to America.

The Obama administration went on to take away their security clearances, making it difficult for them to find any new government positions. Greg Hicks, the former top diplomat in Libya, informed congressional investigators that U.S. military assets were told to stand down that day.

Former House Oversight and Government Reform Committee Chairman Rep. Darrell Issa (R-Calif.) told CNN at the time that Hicks “knew this was a terrorist attack and communicated that to the White House, to the State Department, to anyone that would listen before, during, and after.”

Issa blasted the Obama administration’s “talking points,” especially the statements by the United Nations Amb. Susan Rice, which refused to acknowledge that it was a terrorist attack.

Hicks went on to say, “I believe that the Libyans were hoping that we were going to come bail them out of this mess. . . . The military forces that did arrive only arrived on the evening of Sept. 12.”

Former Rep. Jason Chaffetz (R-Utah), a member of the committee, told CNN that “military personnel were ready, willing, and able, and within proximity, but the Pentagon told them they had no authority and to stand down.”

Again reinforcing the reality that the trillions of dollars Americans have spent on the military-industrial complex have been largely wasted, then-Secretary of Defense Leon Panetta explained to CNN: “This is not 9/11. You cannot just simply call and expect within two minutes to have a team in place. It takes time. That’s the nature of it. Our people are there, they’re in position to move, but we’ve got to have good intelligence that gives us a heads up that something’s going to happen.”

Panetta laughably claimed: “The bottom line is this, that we were not dealing with a prolonged or continuous assault, which could have been brought to an end by a U.S. military response, very simply, although we had forces deployed to the region. Time, distance, the lack of an adequate warning, events that moved very quickly on the ground prevented a more immediate response. . . . The Department of Defense and the rest of the United States government spared no effort to do everything we could to try to save American lives. Before, during and after the attack, every request the Department of Defense received we did, we accomplished.”

While Hillary Clinton’s disgusting sound bite, “We came. We saw. He died,” reminds us of how misguided, immoral, and unconstitutional our foreign policy has become, Qaddafi was tremendously popular with the people; he had a higher than 80% approval rate in his country. From the repugnant assassination of Qaddafi to the tragedy at Benghazi to the new discovery of American weapons there, that may well be used against American interests, our escapades in Libya exemplify everything that’s wrong with our corrupt leaders and their foreign policy. 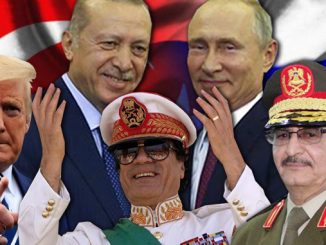