Libya, once a rich society with free education, and healthcare, remains in the grip of a brutal civil war in which major powers are arming the combatants and inserting their own troops and mercenaries into the conflict.

In October 2011, when Libya’s leader, Muammar Qaddafi, and his regime were overthrown by the U.S. and its Western allies, it was one of the richest and most progressive nations in the Arab world. After the West destroyed the regime and walked away, Libya became a lawless nation swiftly carved up by militias. A civil war soon followed, as militias that were once a united force against Qaddafi disintegrated into factions, each with its own foreign backers.

Two major factions now clamor for control of the country and each has its own power players who provide modern weaponry despite a UN embargo, and offer special forces or mercenaries to stiffen fighting capabilities.

In Tripoli, the capital, there is the GNA—Government of National Accord—which has the backing of the UN. It projects little power beyond Tripoli, a city constantly under siege. Its power resides in a mixture of militias, many of them corrupt, and in its benefactors, Turkey, Qatar, and Italy, once the colonial European power that ran Libya. Turkey has been accused of backing the GNA to expand its reach into the Mediterranean and to be seen as the defender of the Islamic elements, including members of the Muslim Brotherhood, that dominate the GNA leadership and its militias. Turkey’s leader, Recep Tayyip Erdogan is so committed to propping up the UN-recognized national government that he has put Turkish troops and Syrian mercenaries into Tripoli. He has also improved its defenses, including using his special forces to train militias. Aside from building a missile shield over the city, he has supplied an armed drone component.

Facing the GNA is the militia army of a man some have called the el-Sisi of Libya, 77-year-old Gen. Khalifa Haftar. His backers include the U.S., Russia, France, Egypt, and Saudi Arabia. He is a former Libyan commander and CIA asset who defected from the Qaddafi regime and moved to Washington years before Qaddafi was assassinated. He returned to Libya when the civil war took hold, vowing to rid his country of extreme Islamists. That particular promise endeared him to Western powers and others in the Middle East who feared ISIS, al Qaeda, and the Muslim Brotherhood gaining a foothold in Libya. Haftar portrayed himself as the strongman who would eliminate Islamic threats to the West and surrounding nations; ironically, as Qaddafi had once done. He even boasted that he had President Donald Trump in his corner after he received a phone call of support from the president. Russia has been more openly supportive of him than the U.S., and, as a consequence, Vladimir Putin has become the biggest power player in brokering talks between all sides.

Haftar has increased his power by controlling the country’s oil fields, thereby depriving the national government in Tripoli of much-needed revenues. His forces are heavily armed and have received an influx of Russian mercenary fighters. Few doubt that he is a man driven by ambition, though some are highly critical of his willingness to ignore war crimes committed by his forces. While a UN agreement does not permit a military figure to run Libya, it is expected he would place someone in power that he would control were he to emerge the victor.

Nevertheless, even with his well-armed force, it is clear that the civil war cannot be ended while foreign influencers are playing out personal strategies in the country. The UN envoy to Libya, Ghassan Salame, who tried to broker peace, resigned after all sides refused to respect a UN arms embargo. He realized that the UN was powerless to enforce the embargo and unwilling to publicly shame nations like Turkey and Russia who were ignoring it.

While no side appears to have the upper hand, Haftar has made enough noise to suggest he will eventually bring Tripoli to its knees. His forces have fired cluster weapons into the city and have bombarded the port. Some critics argue that his ambition and powerful backers make the search for peace illusory. But if Tripoli fell, which seems unlikely while Turkey bolsters its defenses, it is hard to imagine how Haftar could control it. He has named his army the Libyan Arab Armed Forces and, in doing so, has alienated many of the tribes who make up Libya who do not see themselves as Arabists. His hero is Egyptian dictator Abdel Fattah el-Sisi, who is running his own war against Islamic militias.

As the civil war continues, families continue to flee the country, risking their lives by placing themselves in the hands of criminals who promise them a new life in Europe. In parts of the country, criminals and terrorists have run centers where they have held and tortured men and women, sometimes cutting off their hands, to extort money from their relatives. This seems strikingly at odds with what Libya was until the West decided it needed regime change and then abandoned it to competing militias. 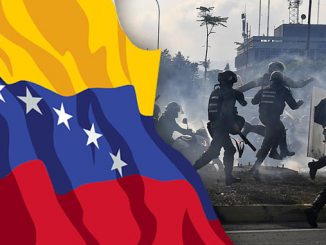