Despite vowing to solve America’s immigration crisis, President Trump has done nothing about it.

On no other issue is Donald Trump’s rhetoric so markedly different from his record than on immigration. During his 2016 presidential campaign, Trump repeatedly blasted America’s laughable immigration policy and vowed to strike boldly and quickly to solve the problem. On Aug. 15, 2015 Trump declared, “The influx of foreign workers holds down salaries, keeps unemployment high, and makes it difficult for poor and working-class Americans.” He then promised, when elected, he would solve America’s immigration woes. Three years later, however, little has been done as the crisis on the U.S. southern border worsens.

While Trump loyalists maintain he can’t get anything done due to the refusal of Democrats to curtail immigration in the slightest, there are actions he could have taken. Trump promised, on March 3, 2016: “I will end forever the use of the H-1B [visa] as a cheap labor program, and institute an absolute requirement to hire American workers for every visa and immigration program. No exceptions.” Trump could have ended this program, which has devastated wages in industries like information technology, with the stroke of a pen. Now, he advocates finding “a pathway for citizenship” for these H-1B workers, tweeting in January: “H1-B (sic) holders in the United States can rest assured that changes are soon coming which will bring both simplicity and certainty to your stay, including a potential path to citizenship. We want to encourage talented and highly skilled people to pursue career options in the U.S.” Reports broke in the same month that Trump’s companies had increased foreign visa usage to a 10-year high.

In March, while sitting next to Apple CEO Tim Cook, Trump announced that “we need” more legal immigration. This followed his State of the Union remarks, “I want people to come into our country, in the largest numbers ever, but they have to come in legally.” This represented the fourth time that month that Trump had suggested increasing the levels of legal immigration.

Trump’s continuing flip-flops on what was a centerpiece issue of his presidential campaign has brought loud criticism from one-time supporters. In a speech shortly thereafter, before the Conservative Political Action Committee, Trump declared, “We need an immigration policy that’s going to be great for our corporations and our great companies . . . .”

“This is clearly a betrayal of what immigration hawks hoped the Trump administration would be for,” declared Mark Krikorian, executive director of the Center for Immigration Studies, which advocates cutting legal immigration by more than half. Krikorian called Trump “not even that different from a conventional Republican.”

“We need to remember all of the promises that candidate Trump made on immigration, which included, most importantly, putting Americans first,” NumbersUSA Vice President of Government Relations Rosemary Jenks told “Breitbart News.” “I would certainly hope, that in order to keep his campaign promises that before even talking about expanding legal immigration, he would work with employers to recruit the 50 million working-age Americans who are outside the labor market.”

Lou Dobbs of Fox Business News angrily remarked, “That Mr. Trump would advance the interests of the global elite ahead of our citizens would be a tragic reversal on any day. . . . [T]he White House has simply lost its way.” Dobbs was particularly irate that Trump would fawningly say, in the presence of Cook and other corporate seekers of cheap labor, “We want to have the companies grow, and the only way they’re going to grow is if we give them the workers.” All this completely contradicts Trump’s campaign rhetoric, when he vowed to dramatically reduce the levels of legal immigration.

In February of this year, Trump inexplicably folded and signed a spending bill that included a diabolical provision that effectively prevents the deportation of any illegal immigrant who can claim to be associated with a minor. U.S. Immigration and Customs Enforcement (ICE) agents have begun criticizing Trump’s policy of dumping those arrested at the border right back onto American streets, while bragging about the number of arrests. They probably won’t find a sympathetic ear at the top of their own organization; Trump recently named Mark Morgan, Barack Obama’s border patrol chief, to head ICE.

“I know without a doubt that President Trump is a liar, he is deceptive, and intentionally manipulating his supporters to lead them to their own doom through amnesty for millions of illegal aliens,” said William Gheen, president of Americans for Legal Immigration. “In truth, Trump shares Obama’s tactics and immigration positions.”

More recently, Trump proudly introduced a new immigration plan, which was written by his liberal, globalist son-in-law Jared Kushner. The point man for his plan was lifelong open-borders advocate and former Never-Trumper Sen. Lindsay Graham (R-S.C.). The proposal, not surprisingly, doesn’t address the core issue of illegal immigration at all. Trump even has developed a nonsensical plan to have ICE fly migrants and illegal aliens across the country, delivering them to shelters instead of deporting them back to their countries of origin.

Trump has been all bark and no bite on immigration.

In late May, a judge ruled that federal funds earmarked for drug enforcement efforts may not be used to build the border barrier. President Trump responded, via Twitter, that the ruling is “against Border Security and in favor of crime, drugs, and human trafficking.”

The mainstream media and some conservatives have blasted President Donald Trump for failing to live up to his campaign promise to build a wall on the U.S. border with Mexico. The problem is, Trump has tried on multiple occasions to move ahead with plans for the wall but has faced unprecedented opposition from Democrats, activists, and the judiciary.

On May 24, U.S. District Judge Haywood Gilliam Jr. issued a ruling halting the Trump administration’s plan to transfer roughly $1 billion from drug enforcement efforts handled by the Department of Defense to border barrier construction projects in both Arizona and Texas.

Congress has refused to approve federal funding at the level requested by Trump for border security, including physical barriers, fences, and walls along the border designed to prevent illegal immigration.

Some of the funds the Trump administration has diverted to border security will still be allowed to be transferred at the president’s request, including about $600 million diverted from an asset forfeiture fund administered by the U.S. Treasury Department, to border security in the Rio Grande Valley, according to the Associated Press.

The $1 billion was initially secured by the Trump administration following the president’s declaration of a national emergency along the border, and was meant to be diverted to funding two high-priority construction projects in New Mexico and Yuma, Arizona.

Trump took to Twitter to denounce the federal judge and demand an appeal.

“Another activist Obama-appointed judge has just ruled against us on a section of the Southern Wall that is already under construction,” the president tweeted. “His is a ruling against Border Security and in favor of crime, drugs, and human trafficking.”

In related news, border officials on the front lines dealing with the immigration crisis are discovering that increasing numbers of migrants attempting to enter the United States are doing so fraudulently, with fake paperwork, fake stories, and fake family connections.

According to a recent report published by The Epoch Times, 48% of all family units interviewed by federal immigration investigators from mid-April to May 10 had either fraudulent documents or family claims. Immigration and customs officials have implemented rapid DNA testing in border sectors near El Paso, Texas and the Rio Grande Valley, and have discovered at least 30% of cases involve fraudulent family claims. Immigration officials have even discovered cases of adults traveling with babies and other children who are not even their biological offspring. Stay tuned.

Is U.S. Border Crisis Under Control? 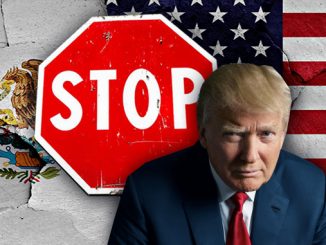